Material and Methods: Two different treatment scenarios were performed on skull model obtained from computerized tomography images of skeletal Class III patients with maxillary retrognathia and finite element analysis was performed. In the first group; mini plates were simulated on infra zygomatic crest. A unilateral 500 g protraction force was applied to the face-mask. In the second group; mini plates were simulated in infrazygomatic crest and mandibular symphysis. Then, 500g protraction force was applied with Class III elastic between the miniplates. Von Misses stresses and displacement values were evaluated comparatively.

Results: In Class III elastic group, maximum Von Misses stress occurred around infra zygomatic crest and symphysis anchored with 0.078 MPa. The maxillary posterior region and paranasal regions were the areas showing the highest Von Misses tension after infra zygomatic crest and symphysis. In the face-mask group, the most common site of Von Misses stress in nasomaxillary complex and alveolar structures were infra zygomatic area where plaques were applied, followed by pterygomaxillary suture. Tensile forces are reduced especially in these two areas by spreading to surrounding structures.

Conclusion: In both methods, it was determined that the amount of force transmitted to circumaxillary sutures was sufficient to induce the formation of osteogenesis in these regions.

Class III malocclusions are orthodontic anomalies that adversely affect psychosocial status of patients due to their significant effects on their appearance and cause orthodontic treatment even if they are less common than other malocclusions. These malocclusions are the primary etiologic causes of genetics and could be seen as mandibular prognathism, maxillary retrognathism or a combination of these two conditions.1-3 In the treatment of these malocclusions, orthopaedic treatments are performed in patients in growth-development period, wheras, camouflage treatment or orthognathic surgical treatment approach is preferred in adults who have completed growth and development. In patients during growth-development period, chin-cap treatment is used to prevent and guide the development of mandible in cases of mandibular prognathism and maxillary protraction treatments with intraoral appliances or often face-mask in cases of maxillary retrognathism.4

Skeletal Class III malocclusions with maxillary retrognathia are treated with an orthopaedic face mask in the early period.5-9 Maxillary protraction with face mask; maxillary suture growth is achieved by stimulating maxilla by applying forces in the same direction as normal growth development. In many studies examining effects on dentofacial structures, anterior movement and anterior rotation in maxilla, posterior rotation in mandible, proclination in maxillary incisors, retroclination in mandibular incisors and an increase in lower face height have been reported.5,6

Proclination of maxillary incisors with dentoalveolar effects of face-mask and retroclination of mandibular incisors camouflage the present skeletal problem. However, treatment goal of this malocclusion is to correct the anomaly by providing skeletal changes. In order to eliminate the undesirable side effects of face-mask treatment, dentoalveolar effects and to increase skeletal effects, researchers have aimed to achieve maxillary protraction using skeletal anchorage in recent years.10-15

The aim of this study was to compare the two different skeletal anchorage methods, which are frequently used in orthodontics for various purposes in recent years with finite element analysis in the treatment of Class III patients with maxillary retrognathia and to predict the differences they create during treatment.

In this study, in order to compare the effects of two different skeletal anchorage methods and maxillary protraction on maxilla, the effect of these systems on same cranial structure was evaluated by three-dimensional finite element stress analysis and static linear analysis. Our aim in finite element analysis is to apply the treatment on three-dimensional model without treatment to the patient and to see the stress areas and displacement amounts in advance.

Ethical approval was obtained from the Clinical Research Ethics Committee, Suleyman Demirel University Faculty of Medicine, Isparta, Turkey (28.05.2019/188). A 15-year-old Class III male with maxillary retrognathia treated in the Department of Orthodontics (October 2018) at Süleyman Demirel University was chosen to be the skull model.17-19 According to the three-dimensional cephalometric analysis obtained from the archive CBCT, a male patient with SNA: 75o, SNB: 83o, ANB: -8o and normodivergent growth pattern was selected. Two different treatment scenarios were performed on the skull model obtained from computerized tomography images and finite element analysis was performed.

Then the elements are separated on three-dimensional model and mesh (mesh) structure is obtained. Separate equations are created for each element and equations are analyzed to reach values at the node. As a result of analysis, data related to different variables could be obtained. These data are principal stresses, axial stresses, displacements, deformation values or equivalent stresses. In our study, the effects of maxillary protraction forces on maxilla were investigated with mini plates placed in different anatomical locations on three-dimensional model.

Finally, the results are analyzed and interpreted. In evaluating the results of analysis; principal stresses for fragile materials (bone, graft materials, porcelains), Von Misses stress (equivalent stresses) values for retractable materials such as metals. With von Misses values, information about stress values occurring in the whole structure could be obtained. 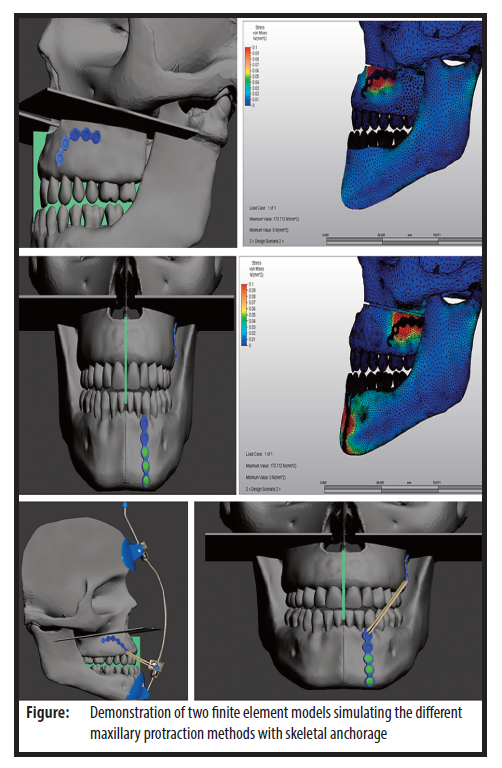 In the first group; miniplates applied for skeletal anchorage were simulated on infra zygomatic crest. The end of mini plate placed on infra zygomatic crest is aligned from lower part of the Apertura piriformis to canine tooth region. Unilateral 500 g protraction force was applied to the face-mask from maxillary canine at 30 degrees with occlusal plane. In the second group; mini plates were simulated in infra zygomatic crest and mandibular symphysis. Then, 500 g protraction force was applied with Class III elastic for each side between miniplates in maxilla and mini plates in mandible. In the obtained finite element model, Von Misses stress, maximum and minimum principal stress and displacement values were obtained and values in both models were evaluated comparatively.

In the finite element model obtained, Von Misses stresses and maximum and minimum principal stress values are given in Table 1.

The displacement values that occur in sutures as a result of applied forces are shown in Table 2.

In Class III elastic group, maximum Von Misses stress occurred around infra zygomatic crest and symphysis anchored with 0.078 MPa. The maxillary posterior region and paranasal regions were the areas that showed the highest Von Misses tension after infra zygomatic crest and symphysis. However, the force applied decreased in nasomaxillary complex as it went to superior and posterior regions. Von Misses was observed in anterior and superior parts of maxillary bone, anterior of the mandible. When displacement values were examined, the most displacement in sagittal direction was observed in pterygomaxillary suture and in frontomaxillary process region. In vertical direction, the most displacement was seen in superior direction in anterior premaxillary region, while tuber maxilla was displaced upwards.

In the face-mask group, the most common site of Von Misses stress in nasomaxillary complex and alveolar structures were infrazygomatic area where plaques were applied, followed by pterygomaxillary suture. Tensile forces were reduced especially in these two areas by spreading to surrounding structures. Minor stress concentrations in frontonasal region were distributed with a similar increase in paranasal area. The least stress concentration was observed in maxillary anterior region and lateral parts of zygomatic bone. The most displacement in sagittal direction occured in the part where plates are applied in maxilla, in pterygomaxillary suture, and in frontomaxillary process region; whereas in transverse direction, the lateral displacement is seen in inferior region of zygomatic arch. In vertical direction, the most displacement in inferior direction was seen superiorly in frontomaxillary suture and in anterior premaxillary region, while the tuber maxilla region posteriorly was displaced upwards.

The sutural modification was reported to be the most important factor for remodeling of nasomaxillary complex.21,25,26 Sutural growth is also closely related to the stress magnitude, intensity and, dose. Different types of stress on same suture might cause different remodeling to occur in the same suture. Although it is known that fibrogenesis and osteogenesis in the suture could be induced by mechanical stimuli in compression and tensile stresses, no clear results have been demonstrated regarding magnitude of the stress that would activate osteogenesis.24

In Class III elastic application between the plates, compression was observed on upper edge of the suture and tensile stress was observed in the adjacent region. In the skeletal anchorage supported face-mask application, tensile and compression stresses were observed in the adjacent region with nasal bone. Gautam et al.  in their finite element analysis study, force of 1000g protraction force from canine and 30o angle down to the occlusal plane applied alone and in combination with RPE (Rapid Palatal Expansion) and evaluated stresses in the sutures.26 The highest Von Mises stresses were observed in sphenozygomatic, zygomaticomaxillary and zygomaticotemporal sutures, respectively. The lowest stresses were seen in internasal and nasomaxillary sutures. The authors stated that different compression and tensile stresses seen in the sutures during maxillary protraction were caused by effect of horizontal force of protraction, as well as by rotation of maxilla counterclockwise. They reported that tensile stresses in upper parts of nasomaxillary suture and compression stresses in lower parts were caused by contraction effect of protraction force on anterior side of maxilla.

According to results of a study in 2013, zygomaticomaxillary, zygomaticotemporal and pterygopalatine sutures in skeletal anchorage supported face-mask model in same force vector, higher values of tooth-supported anchorage model was observed. In nasion and nasal wings, the opposite occurred.31 Based on these findings, the authors stated that skeletal anchorage supported maxillary protraction and stresses that induce growth in the sutures of maxilla were induced, and that in tooth-supported protraction, more osteogenesis activity in nasal region would be better reflected in the profile. Kırcelli and Pektas applied mini plates to edges of nasal wall and the Apertura piriformis for skeletal anchorage. They stated that force vector is the most ideal skeletal anchorage zone since it could protract maxilla in the direction of growth by passing through the center of resistance of maxilla and might be more easily affected due to locations of the circummaxillary sutures.14 Similarly, Liu et al. applied protraction hooks to the Apertura piriformis region and removed them from nostril by applying the force of protraction. The results of this study stated that sutural distraction casused osteogenesis and significant midface development.21

Lee and Baek in their study in 2012 applied mini plates to infra zygomatic crest and Apertura piriformis skeletal maxillary protraction simulated by finite element analysis. As a result of the study; protraction with mini plate applied to the apertura piriformis region was lower than the stresses seen in protraction performed with the support of mini plates applied to infra zygomatic crest.32 However, Tanne et al. and Gautam et al. in accordance with the work; in both models, the highest Von Mises stresses were observed in pterygomaxillary, zygomaticotemporal, zygomaticomaxillary and frontonasal sutures, respectively.26,29

•        In both methods, it was determined that the amount of force transmitted to the circummaxillary sutures was sufficient to induce formation of osteogenesis in these regions.

•        Because the stresses on bones sutures are within physiological limits with the two methods examined in our study, they could be used clinically safely in the treatment of class III skeletal malocclusions since they couldproduce sufficient stimulation in the circummaxillary sutures.

•        The face mask supported skeletal anchorage might be preferred as an alternative in the treatment of class III malocclusions due to maxillary insufficiency due to its advantages such as more uniform stress distributions in circummaxillary sutures compared to the inter-plate Class III elastic application and movement of maxilla in parallel.

Funding: Research costs of this study were paid by the researchers.

Emotional intelligence as an indicator of coping skills among undergraduate dental students at Peshawar: A correlational study