Objective: To investigate the prophylactic effect of the active isolated stretching technique on exercise-induced muscle damage of wrist flexors.

Method: The mixed model randomised controlled interventional study was conducted at the University of Sargodha, Sargodha, Pakistan, from November 2018 to May 2019, and comprised young adults who were untrained, sedentary and healthy who were randomly divided into intervention group A and control group B. Group A participants received self-assisted active isolated stretching before inducing muscle soreness of wrist flexors by eccentric exercises. Group B did not receive any intervention. The outcome measures were pain intensity, muscle soreness, pressure pain threshold, range of motion, and grip strength. Data were collected at baseline, after one hour, and daily from day 1 to 7 after inducing muscle soreness. Data were analysed using SPSS 21.

Conclusion: Active isolated stretching before strenuous, unaccustomed exercise was found to be useful in ameliorating the symptoms of muscle soreness.

Unaccustomed or strenuous eccentric exercises lead to type I muscle strain injury evidenced by muscle soreness,1 reduced muscle strength,2 limited range of motion (ROM), increased muscle thickness, aching, stiffness, tenderness and decreased functional movements.3,4 These symptoms produced by eccentric exercises are referred to as exercise-induced muscle damage (EIMD) followed by delayed onset of muscle soreness (DOMS). Normally, it begins within 12 hours after the novel or strenuous activity. The peak symptoms appear in 2-3 days, and it takes 5-7 days to disappear.5 This may hinder the rehabilitation process in subjects. Moreover, it may interrupt the training programme and ultimately affects sports performance.

A number of studies have tried different interventions for their preventive role in EIMD. Static stretching and therapeutic exercises are one of the important remedies with equivocal outcomes to enhance muscle function, injury prevention, and a transient assuagement from DOMS.5-7 Until the last few years, researchers believed that static stretching can alleviate muscle soreness. However, recent reviews on stretching determined that it has a negligible impact on muscle soreness.6 More extended static stretching probably elicits an impaired muscle performance.8 Active isolated stretching (AIS) has been reported to be handy in restoring muscle function and flexibility, as it is a specific technique based on the principle of reciprocal inhibition, and can increase the flexibility and stability of  muscles without activating a reflex contraction.9,10

A study to evaluate AIS effect on ROM stressed the positive impact of AIS on ROM.11 Another study determined that after a single set of AIS, there was a positive trend towards increasing ROM.12 AIS is used in clinical practice to improve flexibility and stability and has the potential to reduce muscle damage.10 This may establish the employment of AIS as a possible preventive remedy in EIMD. The forearm muscle is a key muscle in many sports, as well as in daily activities. No study was found that may have investigated the prophylactic effect of AIS in EIMD.

The current study was planned to assess the impact of AIS on symptoms of EIMD in wrist flexors, and to investigate its role in the prevention of muscle pain and soreness.

The mixed model randomised controlled interventional study was conducted at the University of Sargodha (UOS), Sargodha, Pakistan, from November 2018 to May 2019, and comprised young adults who were untrained, sedentary and healthy. The study was a part of a large research project about the prophylactic and therapeutic effects of AIS, myofascial release and olive oil phonophoresis in EIMD which has been registered with the Iranian clinical trial registry.13

After approval from the institutional ethics review committee, the sample size was calculated at power 90%, alpha (α) level 0.05 and effect size 0.4 using G-Power software.14 The sample was raised using purposive sampling technique from among the students on the UOS campus by a research assistant not involved in the data collection process.

Those included were individuals of either gender aged 18-30 years with no previous musculoskeletal injury, cardiovascular disorder or skin allergy. They were not involved in any exercise training over the preceding 6 months. Participants who were taking any medicine or had a history of psychiatric illness were excluded.

After informed consent from the participants, they were randomised into intervention group A and control group B using block randomisation method.15 Group A received unassisted AIS before inducing muscle soreness. Group B did not receive any intervention, and the participants followed the same regular daily routine. All the subjects were asked to refrain from ancillary treatment and any arduous physical activity was prohibited during the seven days after inducing muscle soreness.

In group A, self-assisted AIS of the wrist flexors was performed using a specific protocol. After sitting on a comfortable, height-adjusted chair with 90 degrees of hip and knee flexion and feet on the floor, each participant was advised to actively move the hand into extension at the wrist joint, beginning the stretch of the flexors. Then they were requested to use their left hand to gently move the hand into further extension and apply a gentle stretch, with force not exceeding 1 pound. The stretch phase did not exceed >2 seconds. The starting position was restored after each repetition. After performing the stretch, 5 seconds were given to relax. The same protocol and procedure were used for all the participants who repeated it 10 times.

Muscle soreness was experimentally induced in a manner outlined previously.16 The participants were instructed to perform 20 sets of 10 repetitions of wrist curls and reverse wrist curls by using 90 per cent of their 1 repetition maximum (1RM). The outcome measures, including pain intensity and muscle soreness, were assessed on a 10cm visual analogue scale (VAS). The pressure threshold was computed by algometer (Baseline, Fabrication Enterprises, USA). ROM was assessed by a goniometer (ISOM Plastic, Isokinetics incorporation, USA), and grip strength was measured by a hand dynamometer (Baseline, Fabrication Enterprises, USA). All the dependent variables were recorded at baseline, after 1 hour, and from day 1 to 7 in all participants of both the groups. The reading was taken by a person who was unaware of group allocation.

Data was analysed using SPSS 21. It was expressed as mean and standard deviation. Absolute data was used for pain and muscle soreness as well as for grip strength. However, pressure pain threshold (PPT) and ROM data was normalized by observing percentage changes from the baseline. Repeated measure analysis of variance (ANOVA) was applied. To investigate inter-group comparisons, ANOVA for independent observation was used. Paired

t-test was used to observe the changes from the baseline. P<0.05 was considered statistically significant. 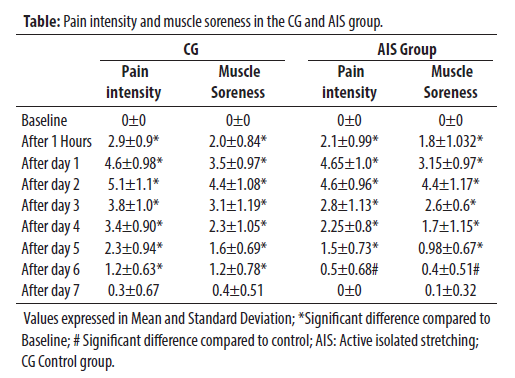 PPT decreased in both groups when compared with baseline values. PPT returned to the baseline level after 5 days in group 1 (p=0.03) and after 6 days (p=0.02) in group B. Group A showed higher threshold on day 5 after inducing muscle soreness compared to group B (p=0.031; Figure 1). 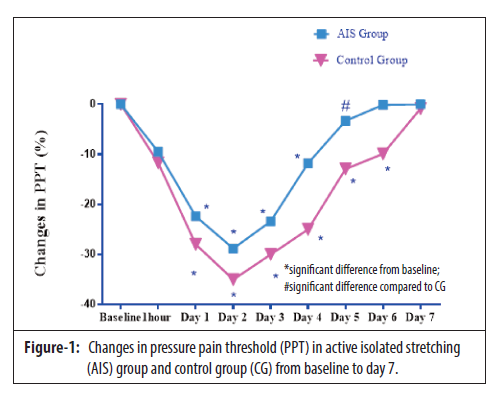 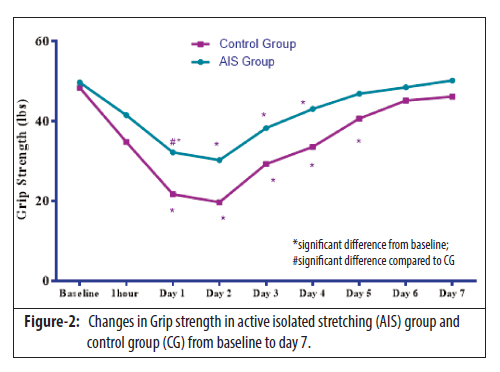 The primary outcome of the current study was that the application of AIS before strenuous, unaccustomed exercise resulted in less deficit of ROM and muscle strength compared to the control group.

It has been suggested that myofiber sarcomere elongation may be a source of muscle soreness.17 Any intervention that can augment the sarcomere length could have chances to limit the sarcomere strains. This could be the reason for minimising muscle damage with eccentric, strenuous exercise. This indicates that AIS would be more advantageous for individuals who are untrained, sedentary, and having compromised muscle flexibility. AIS enhances muscle flexibility11 and may reduce the chances of muscle strain. The current findings are in line with literature.1

The AIS therapy before eccentric exercises showed a lesser deficit in wrist flexion and extension compared to the controls. Pain and stiffness18 due to muscle damage may be a source of decreased ROM. In our study, the control group demonstrated more pain intensity and ROM reduction compared to the AIS group. The participants experienced pain during movement as it exerted stretch or pressure on already damaged muscle fibres.

The current study employed self-assisted AIS to improve flexibility and to prevent muscle soreness after eccentric exercises. A study proposed that by contracting agonist's muscle, the antagonist will relax and lengthened via reciprocal inhibition aching, and AIS would help in preparing the muscle for more forceful movement, improve flexibility and efficacy, limiting the connective tissue or muscle damage linked with unaccustomed physical activities.23 We found a positive change in pain, ROM and strength. Similarly, a study involving athletes concluded that prior application can minimise the risk of injury, and can improve flexibility and running economy.24 These positive trends could be clinically important in rehabilitation, training and prevention.

In the future, a placebo condition should be added to increase internal validity. There is a need to conduct more studies to investigate the effect of AIS on older adults and persons with limited flexibility.

AIS before strenuous, unaccustomed exercise was useful in ameliorating the symptoms of muscle soreness.

Disclaimer: The text is based on a Ph.D. thesis.

Source of Funding: The Higher Education Commission (HEC) of Pakistan.