Methods: The randomised controlled study was conducted at the Armed Forces Institute of Rehabilitation Medicine, Rawalpindi, Pakistan, from February to June 2018, and comprised patients of both genders aged 35-65 years with bilateral knee osteoarthritis. The patients were randomised using sealed envelope method into two equal control and experimental groups. The former received traditional exercise programme, while the latter received balance training on Biodex and traditional exercise programme. Assessment was done at baseline and post-intervention, and the two values were compared both intra-group and inter-group. Data was analysed using SPSS 21.

Conclusion: Biodex balance training was found to be more effective in improving functional performance, stability, proprioception and in decreasing sway and pain compared to the traditional exercise programme.

The most common and frequent type of knee arthritis is osteoarthritis (OA). It is a gradual and progressive degeneration of the joint, also called “wear-and-tear" type of pathology, that gradually erodes the joint cartilage.1 OA involves other joints of body along with knee in 95% patients and is commonly associated with obesity It is evident from literature that the occurrence of knee OA (KOA) is mostly after middle age in people aged 50 years or more with male-to-female ratio being 1:4, and its prevalence increases with advancing age.2

KOA causes change in articular and peri-articular structures, including bones, muscles, tendons and ligaments. With aging, the system responsible for balance control undergoes deterioration and with KOA, this deterioration speeds up and compounds the effect of aging on balance of KOA patients.3 Sensory receptors around the knee joint are also reduced, which cause reduced proprioception in this population. This impaired proprioception and poor Golgi Tendon Organ (GTO) functioning shortens muscles and decreases flexibility and strength of global stabiliser muscles, influencing balance and postural control.4,5 These problems, along with ageing, cause greater balance issues, like difficulty in walking, sit-to-stand activity, ascending and descending stairs and pain compared to normal individuals of this age group.4,6,7 Progression of KOA can be prevented by knee joint exercises, body-weight reduction and by modifying the gait pattern by putting less stress on the affected joint.8

Many protocols have been identified for the management of KOA and to improve pain and functional activities. Exercises include muscle strengthening and flexibility exercises as well as range of motion (ROM) exercises. Aquatic exercises are also beneficial and are recommended for the knee.9

Literature also suggests that balancing exercises can improve the quality of life (QOL), enhance mobility and improve motor activities which stabilise the body by inhibiting destabilising forces on the knee joint.10 Balance training in patients with KOA is useful to improve knee instability and pain intensity.11 The knee joint is stabilised by a combination of neuromuscular control provided by the muscles and passive restriction which is being provided by the ligament and capsule. In KOA patients, muscle weakness, proprioception disorder, high laxity and excessive movement of the knee during walking lead to knee instability and balance problems.12

Biodex is a balance device used to evaluate and train static and dynamic balance and improve neuromuscular control. It has a platform with variable stability setting.12 Literature also suggests that proprioceptive training and balance exercises using Biodex stability system improves standing balance, mobility and reduces the risk of fall in the elderly.13

The current study was planned to determine the effects of Biodex balance training on lower limb functional performance and balance in symptomatic KOA patients.

The randomised controlled trial (RCT) was conducted at the Armed Forces Institute of Rehabilitation Medicine (AFIRM), Rawalpindi, Pakistan, from February to June 2018, according to the CONSORT guidelines (Figure). 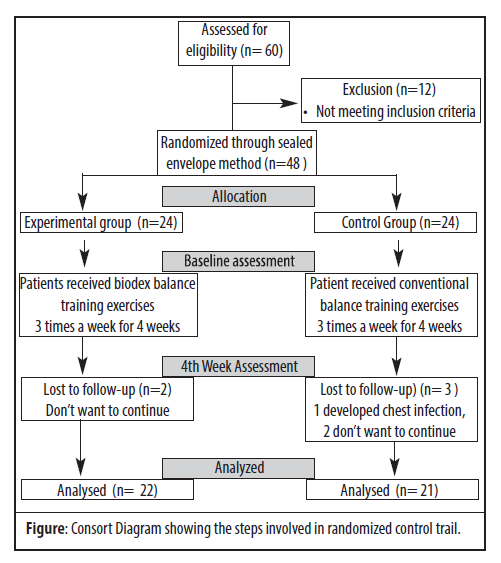 The study participants comprised of grade II and III bilateral KOA patients. The study was approved by the Research Ethical Committee of the Ripah International University, Islamabad(REC00308). The sample size was calculated using OpenEpi version 311 with 95% confidence interval (CI) and power 80%.12 Those included were bilateral KOA patients of both genders aged 35-65 years, while those with positive knee surgical history, recent intra-articular injection, rheumatoid arthritis (RA) and using assistive devices for ambulation were excluded. After taking informed consent from the patients, they were randomised into Control and Experimental groups using sealed envelope method. Both groups received training sessions 3 times a week for 4 weeks. The Control group received traditional exercise programme in addition to balance exercises which included application of trans-cutaneous electrical nerve stimulation (TENS) for 10 minutes on continue mode with Frequency 50-100HZ, hot pack for 10 minutes and 2 sets of quadriceps isometric with 10 repetitions, 2 sets hamstring and calf muscle stretching exercises with 10 repetitions, walking on firm and soft surface for 10 minutes, standing on wobble board for 4 minutes with 2-minute rest intervals.12

The Experimental group received balance training on Biodex along with the traditional exercise programme. During balance training on Biodex, patients stood on the platform bare-footed with eyes open. Patients were looking forward towards the screen having hands hanging by the sides. The patients were instructed not to change their feet position and try to maintain balance. The handles were accessible for safety point. Biodex training consists of postural training and weight-shift training. There was a target on screen which the participants attempted to touch nine times using onscreen cursor manoeuvred by the subjects foot on the device platform. Postural stability test, 3- 20 second trials were conducted with one-minute intervals between them. The platform was fixed and the subject sway was used to calculate the overall stability index (OSI). Postural stability training on Biodex emphasised on specific movement pattern or strategies by placing target anywhere on the screen grid keeping balance within a fixed ring/boundary. Using target approach, the patient was touching the targets by leaning and shifting the postural stance during the session.14 Total time of training was 10 minutes each set of 3 minutes with 20-second rest intervals. Balance was assessed through Biodex Stability System (BSS).12 Postural stability evaluation was done using two trials over a period of 30 seconds with 10-second rest in-between. The subjects were given 5-minute rest between two positions to avoid the effect of fatigue and pain on the scores. Order of testing was chosen randomly. Assessing dynamic bilateral stance was done setting platform at level 8; for static level, the platform was set to remain static with no tilt; and for assessing risk of fall, level 8 and level 6 to 2 was used. Prior to testing, all participants underwent only one practice trial to get familiar with BSS and to understand what was expected of them.14 Total 4-week sessions were provided to both groups. Assessment was done at baseline and post-intervention. Pain was assessed using the Numeric pain rating scale (NPRS)12 and functional performance was assessed using the Western Ontario and McMaster Universities Osteoarthritis index (WOMAC)12 and Time Up and Go (TUG) test.14 Balance was assessed using the BSS which included OSI, anteroposterior (AP) stability, mediolateral (ML) stability, overall sway, AP sway and ML sway, and joint proprioception tested by placing the lower extremity joint in different positions with eyes closed and asking the patient to tell the joint position.15

Data was analysed using SPSS 21. After checking data normality using the Shapiro Wilk test, non-parametric tests were applied. Mann Whitney U test was applied for inter-group analysis. Data was presented in the form of median (interquartile range [IQR]). P<0.05 was considered statically significant. The RCT was registered with the NIH (Registry No: NCT 04019366).16

Baseline values were compared with post-intervention values for both groups (Tables 1-2). 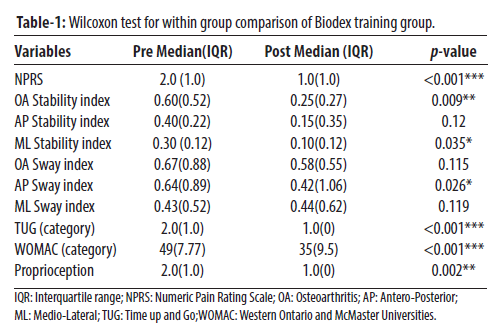 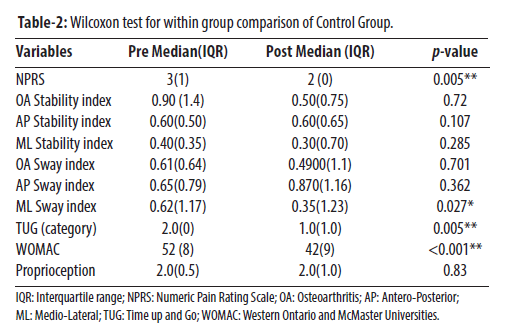 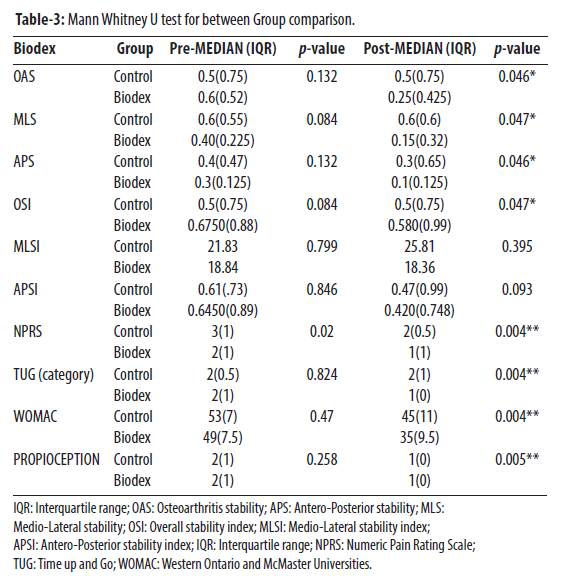 There was significant difference in WOMAC, TUG and NPRS values.

The study showed that Biodex training was much more effective than traditional exercise for KOA patients. The results are similar to the finding of earlier studies.15,17

The current study also showed statistically significant reduction in pain, and improved dynamic stability which is also supported by literature.12