Objective: To compare the effect of low-dose continuous ultrasound and far-infrared interventions for reducing pain in patients with mechanical neck pain.

Method: The experimental study was conducted from April 2016 to January 2017 at the electrotherapy laboratory of the Department of Physical Therapy, College of Applied Medical Sciences, Jazan University, Jazan, Saudi Arabia, and comprised female patients diagnosed with mechanical neck pain. They were divided into two equal groups, with Group A receiving 3 sessions per week of low-dose continuous ultrasound on the cervical region for 7 weeks, and Group B receiving far-infrared treatment on the same patterns. Both groups received stretching, strengthening exercises and transcutaneous electrical nerve stimulation. Pain tolerance was assessed at baseline and post-intervention using digital algometer. Data was analysed using SPSS 17.

Results: Of the 30 women with a mean age of 21.36±1.14 years, there were 15(50%) in each of the two groups. There was a significant decrease in post-intervention bilateral values compared to baseline in both groups. Group B showed higher significant values than Group A (p<0.05).

Conclusions: Far-Infrared was found to be much better than low-dose continuous ultrasound for reducing pain in patients suffering from mechanical neck pain.

Mechanical neck pain (MNP) is a mechanical disorder affecting the neck region, which is manifested by neurological impairments caused by tightness of neck muscles due to poor postural alignment.1 Incidence of neck pain in the general population may reach up to two-third population. As a significant disabling health problem that might cause work absence,2 MNP showed a higher incidence in females (18%) than males (13.2).3

It is a still debatable problem4 caused by multiple factors, such as occupational, personal, environmental and psychosocial factors.5,6 The pathology of MNP has been correlated to the pathology of anatomical structures of the cervical region,7 precipitated by occupational contributing factors, such as repetitive motion, stress, awkward or uncomfortable posture that imposes twice the workload on the cervical muscle which results in the formation of contraction knot called myofascial trigger point.6

Myofascial trigger points of head, neck and shoulder, described as hypersensitive spots of pain caused by skeletal muscle tightness that are painful on compression or stretch, contribute to the major cause of MNP.8 MNP is often described by the patient as stiffness of neck and shoulder, fatigue and dull pain which is exacerbated by neck and shoulder movement.3 Some studies have described MNP as a pain affecting the cervical, occipital or posterior scapular area.7 However, some patients showed headache and hyperalgesia affecting the mandibular region, over the masseter and temporalis muscles.5

To exclude causes of neck pain other than MNP, neck pain is assessed by taking patient history, conducting physical examination and radiological assessment.9 Physical examination includes assessment of cervical active range of motion (ROM). It has been found that there is a considerable decrease in active ROM in patients complaining of MNP compared to asymptomatic persons.10 Another method of assessing MNP is self-administered questionnaires which assess the effect of neck pain on the patient in terms of functional level, disability, psychological impact, any improvement of the problem and the effect of therapeutic modalities on patients.11

Owing to its high reliability, an electronic algometer is used to effectively measure pain thresholds and tolerance.12 Manual therapy, like spinal manipulation therapy (SMT), stretching and strengthening exercises, has been found to be more effective than the use of oral anti-inflammatory drugs.13 Transcutaneous electrical nerve stimulation (TENS) is an effective non-invasive electric modality14 that is most commonly used to relieve pain in many painful conditions, with evidence suggesting conventional TENS mode to be more comfortable and effective in pain relief than the low TENS mode.15 The conventional TENS mode stimulates large diameter Abeta (Aβ) fibers through the application of low-intensity alternating current (AC) that stimulates the gate control theory and, in turn, diminishes pain awareness.16

Heat therapy produces muscle relaxation and pain reduction through decreasing pain receptors' sensitivity, and increase ROM by increasing collagen extensibility, and improving blood flow.17 Considered to be one of the physical therapy modalities used to produce superficial local and generalised heating, infrared radiation (IRR) can increase circulation and produce an analgesic effect in many conditions, such as tension headache, myalgia, muscle spasm and haematoma.17

Although studies have described many positive effects of IRR on reducing pain, improved wound healing, and increased endorphins level,17,18 few studies have evaluated the therapeutic effect of near IRR on chronic neck pain using subjective and objective assessment methods.19 Ultrasound (US) therapy is another non-invasive modality used to relieve pain.20 It transfers energy to the tissues through its mechanical vibrations, which are the same as sound waves but at higher frequency.21 US is known to be harmless, non-invasive and an inexpensive modality.22

The physiological effects of US are based on the selected frequency and intensity. Intensity of 0.5 to 0.7 W/cm2 has shown to be effective in pain relief and increased soft-tissue extensibility.23 The amount of US that is absorbed in tissues is based on the frequency of the applied US with 3MHz frequency in continuous mode which can elevate tissue temperature from 34.3oC to 37.3oC.24 This thermal effect of US produces multitude of effects, including analgesic effect, increased metabolic activity, improved circulation and muscle relaxation.25

Since systematic reviews failed to provide enough evidence supporting the priority of using different therapeutic modalities on MNP, such as electrotherapy and manual therapy, till date no definite useful treatment can be agreed upon.26 Some studies used US with 0.1 W/cm2,27 and others used IRR. The current study ws planned to compare the effect of US and far infrared (far-IR) on reducing pain for patients suffering from MNP.

The experimental study was conducted from April 2016 to January 2017 at the electrotherapy laboratory of the Department of Physical Therapy, College of Applied Medical Sciences, Jazan University, Jazan, Saudi Arabia, After approval from the institutional ethics review board, the sample size was calculated using a statistical power analysis programme named as G*Power 3.1.9.4 calculator.28,29 An effective sample size of 28 was obtained by applying a 2-tailed priori paired t-test while keeping power at 0.80 or 80%, effect size, or Cohen’s d, 0.56, mean difference 1.4±2.5 and level of significance 0.05 from a pilot study done prior to this study.

The sample was raised using convenience sampling method. Those included were female patients diagnosed as MNP cases by a radiologist. Individuals who were pregnant or with spinal fractures, systemic inflammatory disease, tumour or malignancy, cervical radiculopathy, previous surgeries in spine, history of neck trauma and rheumatoid arthritis were excluded. After taking written informed consent, the subjects were randomised into two equal groups using a website Randomization.com online tool (http://www.randomization .com).30

All patients received 7 treatment sessions delivered by one physiotherapist to maintain the quality of the technique.

All patients were documented for pressure tolerance measurement test to assess pain tolerance algometry (JTECH Commander Echo Algometer Model 1225101) at baseline and post-intervention by one assessor who was blind to the study. Low value on algometry indicated minimal pain tolerance and vice-versa. Each patient was asked to indicate the specific area of pain and trigger points. The tip of the applicator was used to press on the identified trigger points with the patient in prone position. The maximal amount of pain that a patient could tolerate against the applied pressure gradually on an identified trigger point was noted as the mean of three trials. Increased value of pain tolerance post-intervention indicated relief in pain.

Additionally, all participants in both the groups received TENS with pulse frequency 120Hz, pulse duration 100μs, and treatment time 15 minutes. Four self-adhesive electrodes were positioned on the marked treatment points allocated by the patients. The amplitude was increased gradually till the patient started to feel tingling sensations.31

Data was analysed using SPSS 17. Descriptive analysis was used to determine means and standard deviations of the collected data. Paired t-test and independent t-test were applied to compare intra-group and inter-group data. All tests were two-sided and p≤0.05 was considered significant.

Of the 30 women with a mean age of 21.36±1.14 years, there were 15(50%) in each of the two groups. The mean age in Group A was 21.18±0.4 years and in Group B it was 21.54±0.9 years. There was significant improvement in pressure tolerance in both groups post-intervention compared to baseline values (p<0.05), but Group B showed higher significant value than Group A for left and right side treatment area (Table).

Group A and Group B showed higher significant improvement for the left side over right side (p=0.001) post-intervention (Figures 1-2). 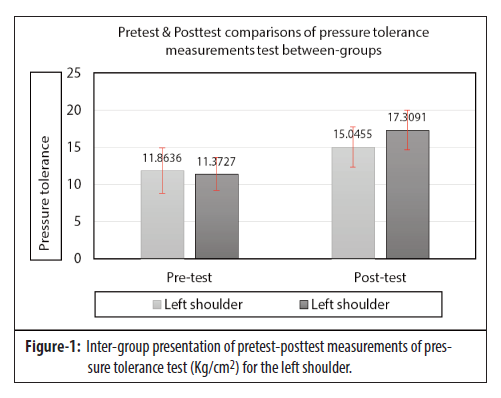 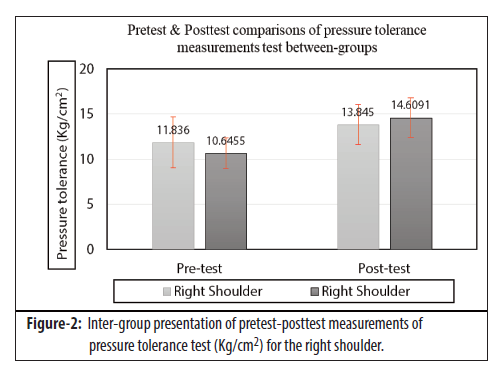 The current study showed that patients who received Far-IR therapy had a highly significant difference in post-intervention scores compared to the baseline, while the patients who received US showed a significant difference. This means that the efficacy of Far-IR was better than US on reducing MNP. The results are in line with literature.32 The mechanism by which Far-IR reduces pain can be explained by activation of gate control theory.33 As the heat produced by Far-IR suppresses the activity of pain fibres and stimulates the endorphins release, pain gate mechanism is activated.21

In agreement with our results, several studies have reported that the main cause of MNP is muscle spasm which leads to reduction of blood flow, hypoxia and pain.33,34 Tissue-heating caused by Far-IR increases the blood flow to the painful area and reduces muscle spasm and pain. Heat has a relaxing effect on skeletal muscle tone as it decreases the excitability of muscle spindle17 and this also supports our results.

In the current study, the patients who received US showed a significant bilateral decrease in pain post-intervention, but not as much as those who received Far-IR, which means that US was not as effective as far-IR in reducing MNP. This is in agreement with a study which stated that the thermal changes in tissues produced by US are insufficient to produce the desirable therapeutic effects when applied at traditional clinical parameters.24 To achieve the desirable thermal effect, the tissue temperature should be raised between 40oC and 45oC for at least 5 minutes. Application of 3 MHz at 1.5W/cm2 continuous mode of US can elevate tissue temperature from 34.3oC to 37.3oC only, while Far-IR can elevate tissue temperature as high as 42oC.21

One study investigated the effect of US with low intensity of 0.1W/cm2 on myofascial trigger points and measured pain pressure threshold immediately after US treatment. They found that there are no changes for pressure pain threshold observed between pre- and post-intervention measurements with low-intensity US exposure.27 This may explain the outcome of the current study concerning the effect of US with intensity of 0.5W/cm2.

Also, our results are in agreement with a study which concluded that both continuous and pulsed US produce thermal changes in the tissue (muscle), but this thermal change has minimal therapeutic value.35

Further studies are needed to measure the effect of US on MNP by using high doses of 1.5W/cm2 and more frequent treatment sessions.

Far-IR therapy was found to be more efficacious than low-dose continuous US therapy in reducing pain in MNP patients.