Objective:  To compare the recurrence rate and chronic pain in hernia patients undergoing laparoscopic or robotic transabdominal preperitoneal fixation with and without mesh.

Method: The prospective comparative study was conducted at Surgical Units 4 and 5 of the Civil Hospital, Karachi, from August 1, 2017, to July 1, 2018, and comprised hernia patients undergoing laparoscopic or robotic transabdominal preperitoneal fixation who were randomised into fixation Group A and non-fixation Group B. Postoperative visual analogue scale score was calculated at the time of discharge. At 1-year follow-up, recurrence rate and chronic pain were assessed. Data was analysed using SPSS 23.

Conclusion: There was no significant difference in terms of recurrence and chronic pain between mesh and non-mesh fixation.

Inguinal hernias account for 75% of abdominal wall hernias. Males have 27% chance of acquiring inguinal hernia in their lifetime compared to females who have 3% chance.1 There are various methods of repair of inguinal hernias, with tension-free mesh repair considered the standard. Laparoscopic techniques have gained popularity due to small scars, early mobility and less postoperative pain. The transabdominal preperitoneal (TAPP) approach involves creating a peritoneal space and placing the polypropylene or polyester mesh in the preperitoneal space and closing the overlying peritoneum. The mesh can either be fixed with a tacker device or left as such without fixation. There are several proponents and opponents of this technique. Proponents claim that the fixation is employed to minimise the chance of mesh migration and, therefore, recurrence of hernia, but this increases the cost of the procedure and may result in postoperative pain.2 There are reported incidence of chronic pain in 8-16% of patients who undergo repair of inguinal hernias.3 One of the main concerns in non-fixation of mesh is the chance of mesh migration and, therefore, recurrence of hernia, but a meta-analysis of eight randomised controlled trials (RCTs)4 comparing use of tacker fixation versus no fixation of mesh concluded that the risk of recurrence did not increase with the non-fixation of mesh. Yet the surgeons continue to use mesh fixation at their discretion. The current study was planned to compare the recurrence rate and chronic pain in patients undergoing minimally invasive laparoscopic or robotic inguinal hernia repair with and without mesh fixation.

The prospective comparative study was approved by the institutional review board (IRB) of Dow University of Health Sciences. Study was conducted at Surgical Units 4 and 5 of the Civil Hospital, Karachi, from August 1, 2017, to July 1, 2018. The sample size was calculated using recurrence rates of 0.4% and 0.5% in the non-fixation and fixation groups, respectively.4 Alpha was kept at 5% and power 70%. Convenient Sampling technique was employed. Patients with incomplete direct or indirect hernias, recurrent incomplete direct or indirect hernias with defect size <3cms and those fit for general anaesthesia were included. Patients who required conversion to open surgery were excluded, and so were those lost to follow-up. After taking consent from the patients, they were randomised using the sealed envelope method into fixation Group A and non-fixation Group B. Preoperative antibiotic co-amoxiclav was given at the time of induction. Instruments used for robotic surgery included Cadiers forceps, scissors, needle holder and Maryland dissector. two arms were used and ports placement were 12mm supra umbilicus, 8mm ports on each side of the umbilicus about 8cms from the camera port. An assistant port of 10mm was placed in the right hypochondrium. For laparoscopic procedure, 3 ports were used; one 10mm camera port above the umbilicus, and two ports about 4-finger-breadths on each side of the camera port. One of the ports was 10mm and the other 5mm. Absorbable tacker (AbsorbaTackTM Covidien) or non-absorbable tacker (ProtackTM Covidien) were used for mesh fixation. A single tack was done above the bony prominence. Prolene Mesh 15x15cms was used and cut to the dimension of 9x13cms in all the patients. Peritoneum was closed with prolene suture. Postoperatively oral antibiotic was continued for 3 days. Analgesic ketorolac 30mg intravenously (IV) was given twice daily on the first postoperative day. Afterwards, oral analgesic diclofenec sodium 50mg was prescribed twice daily for 3 days. Pain was assessed using visual analogue scale (VAS) score at the time of discharge which was done on the 1st postoperative day, but was extended in case of severe pain. Patients were followed up on day 10 for wound and stitches inspection, and subsequently at 1 year till June 2019 to check for chronic pain and recurrence. Cunningham et al.5 criteria was used to classify chronic pain postoperatively. Pain was labeled as mild if there was mild occasional pain or discomfort that did not limit activity; moderate pain which prevented return to preoperative activities; and severe pain that was incapacitating at frequent intervals or interfered with daily activities. Only moderate and severe pain levels were taken as significant chronic pain in all the patients on follow-up visits. 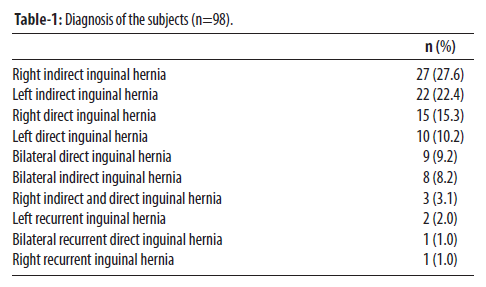 The prospective study was conducted to compare the frequency of chronic pain and recurrence in patients treated with either mesh fixation or non-fixation in hernia patients. Various studies quote 10-12% risk of chronic pain that impairs daily activities following open hernia repair surgery using mesh, and around 4-5% in patients undergoing laparoscopic repair.6,7 A study 6 showed a mean VAS score of 3.9 vs 1.6 in mesh fixation and non-fixation groups at 24 hours after surgery(p<0.0001), implying that patients without mesh fixation had less postoperative pain. The same trend was also seen in the current study.

Recurrence of inguinal hernia ranges 11-13%.13 There are many factors involved in its recurrence, like technical factors, size of hernia, size of mesh, fixation of mesh, type of repair etc.13 In a study14 comparing fixation and non-fixation groups in totally extra peritoneal repair (TEP), there was no difference in the recurrence rates between the groups. However, the study14 was retrospective and the sample size was small. In the current study, the recurrence rate was 1.02% in a single patient who underwent TAPP with mesh fixation at 6 months post-procedure.

The current study has limitations as it included patients only lapararosocpic and robotic surgery. Also, only incomplete hernias and those with defect <3cms were included, and, therefore, the effect of factors like mesh size and recurrence for larger hernias could not be ascertained. Finally, BMI was not calculated and its association with chronic pain could not be determined.

In incomplete hernias with defect size <3cms, there was no significant difference in terms of recurrence and chronic pain between mesh fixation and non-fixation groups.