Preoperative embolization plays a significant role as an adjunct to surgical intervention in the cases of certain vascular tumours of the brain. While the procedure has resulted in facilitated resection of the tumour, and has reduced morbidity and mortality, its application remains debatable within the neurosurgical community, owing to rare, but major post-procedural complications. Herein, we have reviewed the literature to assess the safety and efficacy of preoperative angiographic embolization for brain tumours.

Despite advances in microsurgical techniques, management of vascular brain tumours is complex, and requires a multi-disciplinary approach.1,2 Pre-operative embolization (PEm) was first described in the 1970s, and has slowly gained acceptance amongst the neurosurgical community, as an adjunct to brain tumour surgery for hyper-vascular tumours.1 Tumour embolization refers to any procedure performed either percutaneously, through a direct puncture of the tumour (DPT), or via a trans-arterial approach, in which embolic material is injected with the goal of reducing tumour vascularity, hence, minimizing morbidity and improving chances of successful tumour resection.1 The latter is facilitated through necrotic softening of the tumour, making it more easily resectable.3

Embolization of extra-axial tumours such as meningiomas, performed in the territory of external carotid artery (ECA), is generally safer than embolization of intra-axial tumours such as haemangioblastoma, which derive their vascular supply from internal carotid artery (ICA) or vertebrobasilar artery (VBA).2 Most commonly employed embolisates include particles such as Poly Vinyl Alcohol (PVA) and trisacryl gelatin microspheres (TAGM), as well as liquid embolic agents such as Onyx and N-Butyl Cyanoacrylate (NBCA).3 There are multiple objectives for pre-operative devascularization of the tumour, the most important being minimizing blood loss, and decreasing operating time. Other benefits include their use in palliation, by decreasing tumour size and reducing pain in patients not fit for surgery.1 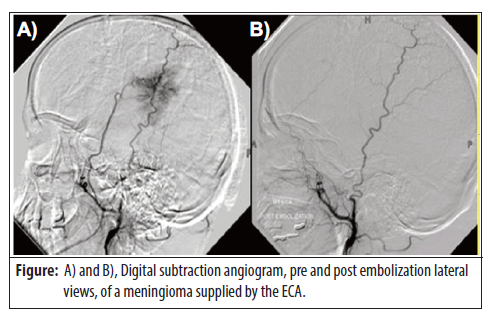 However, some authors have questioned the utility of PEm, in the light of questionable cost-effectiveness and the risk of post-procedural complications. In this paper, we have reviewed the technical efficacy, safety, and outcomes of pre-operative brain tumour embolization.

Kubota et al., published a case of a patient undergoing surgery for a huge, right-sided tentorial epithelioid haemangioendothelioma (E-HE), in which authors had to abort surgery due to haemorrhage. The patient underwent embolization with PVA of the right ECA partially feeding the tumour five days before second surgery. Subsequent gross-total removal of the tumour was relatively bloodless, and no recurrence was reported even nine years later, suggesting PEm to be rational in cases of E-HE.4 Duffis et al., proposed their highly cited guidelines for embolization in 2012.1 Non-invasive imaging was suggested to allow delineation of the extent of tumour and digital subtraction angiography (DSA), along with super-selective catheterization of ECA was recommended to allow for identification of displaced feeders, presence of collateral flow distal to the involved carotid; and to reveal intracranial anastomoses. Tumour blush was proposed as a radiologic measure of procedural efficacy. According to the authors, tumour resection within 24 hours of embolization was to be avoided and a delay of 1 to 8 days from embolization was recommended. However, the timing for surgery after embolization remains controversial and some authors advocate resecting the neoplasm immediately, or within a day, to avoid potential worsening of peritumoral oedema.5 Steroid use was also advised in tumours at risk of post-embolization oedema.

Wang et al., published the outcome of PEm in eight paediatric brain tumour patients over eight years, and reported good results with embolization as a surgical adjunct.2 Embolization was done with either NBCA or TAGM. Four out of the eight cases were of choroid plexus papilloma, and two of these patients, both embolized with TAGM, developed tumour bleeds.2 Hanak et al., retrospectively reviewed 15 patients, who underwent 17 PEm for haemangiopericytomas (HPC) at two centers. More extensive devascularization was achieved for HPCs with primarily ECA blood supply, than those with ICA/VBA circulation. The authors reported an average time interval of 2.2 days between embolization and surgery, with no greater than 500 ml blood loss in tumours that achieved 80% devascularization. The authors, however, did not notice any significant difference in gross total removal of embolized versus non-embolized tumours.3

In a systematic review of PEm for intradural spinal haemangioblastoma (HB), Ampie et al., analyzed 29 reported cases. The most commonly utilized embolisate was (PVA), followed by TAGM and NBCA. Excellent rates of gross total resection (GTR) were reported, with estimated blood loss (EBL) averaging up to 187.5 ml. Complications from embolization and surgery were minimal, with no deaths or permanent neurological morbidity. The authors, however, noted excellent outcomes from microsurgery alone from historical series, questioning the rationale behind PEm.6 In another systematic review for intracranial HB, Ampie et al., reported that PEm did not increase GTR rates and failed to reduce blood loss and complications, rather itself significantly carrying the aforementioned risks. In a total of 111 patients compared to 392 non embolized ones, GTR was achieved in 83.7% and 95.6% of the patients, respectively. Intraoperative blood transfusion was required in 15.3% of embolized and 0.51% of non-embolized controls, while rates of postoperative haemorrhage were 8.4% and 1.6%, respectively. Complication rates from embolization were 11.7% and following consequent surgery were 20.7%, deeming PEm as inconsequential in the authors’ view.5

Duffis et al., reported stroke and intracerebral haemorrhage in up to 3-6% cases of PEm. While both particulate and liquid emolisates were used, the former was linked to greater complication rates, a notion supported by Wang et al., too.1,2 In another study with intradural spinal HB cases undergoing PEm, transient post-embolization complications were rare, and included swallowing difficulty (3.5%), decreased position sense (3.5%), and spasticity (3.5%).6 However, in the cerebellar subset of the same tumour, complications were more common, and included post-procedural haemorrhage, ischaemic infarcts, dysarthria, hemiparesis, and hemisensory impairment, although mortality rates were not significantly different compared to non-embolized cohort.5 In their retrospective review of 39 patients, Tanaka et al., described five patients with worsening of existing neurological symptoms, explained as an inflammatory response, a condition they termed as post-embolization neurological syndrome (PENS).10 In another retrospective analysis of PEm in meningioma patients by Barros et al., the authors reported three procedure-related complications including middle meningeal artery that required coiling; self-resolved catheter-induced vasospasm, and a cervical ICA dissection.9

PEm of hypervascular brain tumours has a high technical success rate as a surgical adjunct, but also carries a reasonable risk of complications. The authors therefore recommend judicious utilization of this treatment adjunct.