In this study, the clinical and laboratory findings, management and follow-up of 32 children with paediatric systemic lupus erythematosus (pSLE) were evaluated to determine the prognostic factors in pSLE. Of the 32 patients, 25 (78.1%) were females. Age at onset of symptoms and diagnosis in the patients were 147.6 ± 49 months and 154.3 ± 48 months, respectively. The most common symptom on admission were joint problems, seen in 25 (78.1%) patients. Haematological alterations were seen in 25 (78.1%) cases during follow-up. Lupus nephritis was diagnosed in 10 (31.2%) patients. Malar rash was seen in a total of 12 (37.5%) patients during follow up, however it had been noted in five (15.6%) patients on admission. Antinuclear antibody and anti-dsDNA were positive in all patients and 31 (96.8%) patients, respectively. Decreased complement 3 and 4 levels were noted in 23 (71.8%) patients. Antiphospholipid antibody was studied in 27 patients and it was found to be positive in 13 (48.1%) patients. In conclusion, based on our findings, we would like to emphasize that pSLE has a large and remarkable clinical and laboratory findings.

Systemic lupus erythematosus (SLE) is a chronic inflammatory and autoimmune disease which can decrease the quality and duration of life, and involve many organs and systems. Although it can affect all organs and systems, skin, joints, kidneys, lungs, nervous system and serosal membranes are commonly involved.1 Antibodies most commonly associated with SLE are antinuclear antibodies (ANAs) and anti-double stranded (native) DNA (anti-dsDNA). Paediatric systemic lupus erythematosus (pSLE) constitutes approximately 10% of all SLE cases.1,2 Compared with adults, children and adolescents with SLE have more severe disease and more widespread organ involvement, though the prevalence of SLE in children and adolescents (1-6/100,000) is lower than that in adults (20-70/100,000). Systemic lupus erythematosus predominantly affects females, with reported 2-5:1 ratio before puberty, and 9:1 ratio in adults.3 Because the onset and course of pSLE is usually atypical, diagnosis may be delayed. In aetiology, several factors such as genetics, race, hormones and environmental interactions are blamed.2-4

In this study, the clinical and laboratory findings, management and follow-up of children with pSLE were evaluated to determine the prognostic factors in pSLE.

In this study, characteristics of 32 patients diagnosed with pSLE, who were being followed-up between January 2008 and July 2018 at Department of Paediatric Nephrology/Rheumatology, Meram Medical Faculty, Necmettin Erbakan University in Konya/Turkey, were evaluated retrospectively. All data (demographic features, clinical and laboratory findings, management and follow-up) was obtained from the patients’ records. All the patients met the revised American College of Rheumatology (ACR) criteria for SLE.5 The study was approved by the local Ethics Committee.

At the time of diagnosis, following abnormal findings were identified: joint involvement in 25 (78.1%) patients, loss of appetite in 14 (43.7%), petechial rash/epistaxis in 8 (25%), recurrent oral lesions in 7 (21.8%), fatigue in 6 (18.7%), fever and malar rash, each in 5 (15.6%) patients, autoimmune hepatitis and nephrotic proteinuria, each in 3 (9.3%) patients, abdominal pain in 2 (6.2%), and discoid rash, splenomegaly, pancytopenia and lymphadenopathy, each in one patient. Whereas discoid rash was seen in 6 (18.7%) patients during follow-up. It may be highlighted that malar rash, which is considered to be typical for SLE, was observed only in 5 (15.6%) cases and this ratio increased up to 12 (37.5%) children at follow-up. The laboratory findings at the time of diagnosis are shown in Table 1. 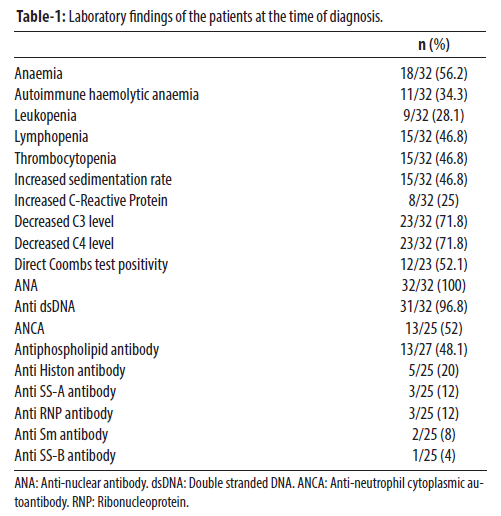 Organ involvement and complications at diagnosis and/or during follow-ups are presented in Table 2. 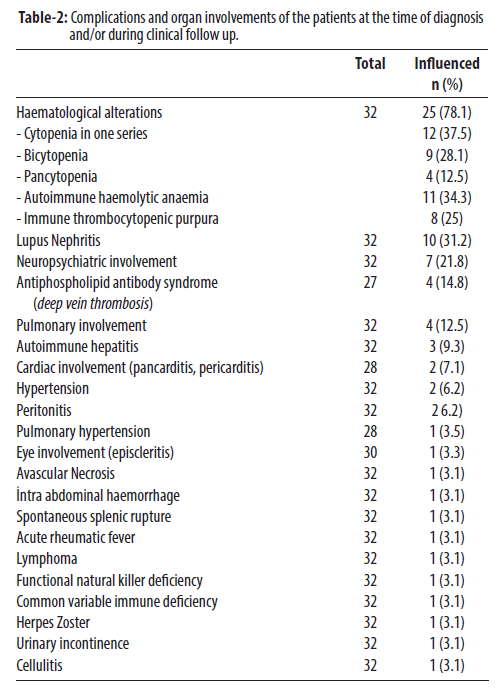 Haematological alterations in 25 (78.1%) patients were the most common feature. Renal involvement was presented as proteinuria in 10 (31.2%) patients and microscopic haematuria in one case. Renal biopsy was performed in 11 patients and the results were as follows; diffuse proliferative lupus nephritis (LN) in five patients, focal LN in two, and sclerotic LN in one patient. Unfortunately in two patients diagnosed with LN in another medical centre, details of renal biopsy findings could not be reached. The reminder one patient had normal biopsy findings. Although positive anti-phospholipid antibody was more common in females (three times), three of four patients with venous thrombosis were males.

In the treatment, following drugs were used; corticosteroids in 28 (87.5%) patients, cyclophosphamide in 9 (28.1%), azothiopurine in 6 (18.7%) and hydroxychloroquine in 17 (53.1%) patients. Intravenous immunoglobulin and monoclonal anti-CD20 antibody (rituximab), each was used in three patients. Additionally, acetylsalicylic acid at an antiplatelet dose was administered in 13 patients with positive antiphospholipid antibody. During the follow-up of all pSLE patients, one case underwent haemodialysis due to renal failure and two patients died.

In our study, pSLE was seen more commonly in females and this was compatible with previous data. The disease can occur at any age but it is usually diagnosed in children above five years of age. The ages at the onset of symptoms and diagnosis in our study were also similar to other studies.4,6,7

The most common complaint seen in our patients on first admission was joint complaints in 25 (78.1%) patients. This ratio was similar to the study conducted by Ramirez et al (83%),6 but higher than that observed by Sahin et al7 (39.7%) and Gulay et al (53.3%).8 Five (15.6%) patients had photosensitivity and malar rash at the time of diagnosis; this ratio increased up to 12 (37.5%) cases  at follow-up. Whereas, malar rash was  noted in higher frequencies (70.4%-76.1%) in some studies in the literature.6-8 It was highlighted that malar rash and photosensitivity, which are considered to be typical for SLE, were less commonly seen in our patients.

In our patients, anti-nuclear antibody (ANA) was positive in all (100%) patients and anti-dsDNA in 31 (96.8%) patients. In literature, ANA positivity ANA positivity rate8,11 was 95%-100%, and anti-dsDNA positivity rate9,10 was 73% and 90.6%. Thirteen (48.1%) of our 27 patients were found to be anti-phospholipid antibody positive; approximately one third of them had venous thrombosis. Importance of prophylactic anticoagulant use in anti-phospholipid antibody positive patients was noted.

In our series, thrombocytopenia and lymphopenia were  common abnormal laboratory findings and each was diagnosed in 15 (46.8%) patients. This was followed by autoimmune haemolytic anaemia (AHA) in 11 (34.3%) patients. Lymphopenia ratio was similar to previous studies.6,7 However, thrombocytopenia and haemolytic anaemia were observed to be higher than that in the literature.6-8,11

In our study, C-reactive protein (CRP) and sedimentation rate were found to be high in eight (25%) and 15 (46.8%) patients, respectively. Tan et al10 found lower mean CRP rate and higher mean sedimentation rate as compared to our results. This can be because most of our patients had first presented at other departments and when they came to paediatric nephrology/rheumatology, they might be between attacks. Sahin et al7 reported that the percentages of low C3 and low C4 in their patients were 53.3% and 46.7%, respectively. Ratios of our patients with low serum C3 and C4, each found in 23 (71.8%) patients, were higher than the literature. A male patient had been followed-up as hypocomplementemic urticarial vasculitis for five years and then typical pSLE manifestations developed. Despite intensive treatment, he died due to renal failure. Therefore, patients with immune system problems should be closely monitored for atypical pSLE course.

During follow-up, the most common systemic involvement was found to be haematological in 25 (78.1%) patients. In the literature, AHA in pSLE is more common compared to adults. During follow-up of patients with idiopathic AHA, SLE may develop after months to even years.12,13 Immune thrombocytopenia may be the first sign in SLE patients. This condition is observed in 12% of patients with immune thrombocytopenic purpura (ITP).13-15 In our pSLE patients, we have observed AHA and ITP in 11 (34.3%) and 8 (25%) cases, respectively. Some of our patients who were being followed-up due to AHA and/or ITP were eventually diagnosed as pSLE over the years. In our study, lupus nephritis was seen in 10 (31.2%) patients. Renal involvement was reported 29.3% and 71.7% in different studies.7,8 Renal involvement is important for prognosis of SLE and should be closely monitored. Neuropsychiatric involvement was revealed in 7 (21.8%) of our patients. In the studies of Sahin et al7 and Gulay et al8, the ratios of neuropsychiatric involvement were 16.3% and 32%, respectively. Treatment regimens of our patients were noted similar to previous studies.7-9

Our study is a single-centre and retrospective performed in Central Anatolian Region, including a 10-year experience of pSLE patients. Different remarkable findings were detected in our study, however multi-centre prospective studies with larger series are needed.

As SLE can involve several organs and systems, it should be taken into consideration in differential diagnosis of other systemic diseases. In our study, the rates of joint involvement and low complement levels were observed to be higher than and malar rash was seen lower than previous studies. Development of venous thrombosis in one third of those with positive anti-phospholipid antibody was considered remarkable and suggests importance of prophylactic anticoagulant use in patients with positive antibody. Because of transformation of the disease with single system involvement into SLE, or involvement of other systems or complications over time in cases diagnosed with SLE, early diagnosis and successful management of pSLE seems to be important for the prevention of morbidity and mortality.