Utilisation of blood products at a centre in Pakistan. Is donating better than wasting?

The study was designed to investigate the quantity and reasons of wastage of blood products. This was an observational study conducted from February 2018 to February 2019 at the National Institute of Blood Disease and Bone Marrow Transplantation (NIBD and BMT), PECHS campus. The study was approved by the institutional review board. Wastage and reasons of wastage for all the blood products were evaluated. Frequencies were calculated by using SPSS version 23.0. A total of 2,880 bags of blood products were available, including 960 each of platelets, packed red cells and fresh frozen plasma. The overall wastage rate was 3.5%. Packed red cells and platelets were fully consumed, yet shortage of supply was observed. However, highest wastage was observed in fresh frozen plasma i.e. 102 bags. Expiry of unused products 60 (59%) followed by broken bags 30 (29%) were two common modes of wastage. Wastage of blood products is a genuine issue in a hospital setup, strategies and plan of action should be discussed and implemented to ensure that they are available when and where they are needed most.

Blood is a precious resource of life1 and one of the main life-saving interventions in various situations such as severe anaemia, trauma, surgery, chemotherapy, complicated pregnancy and childbirth.2,3 Most often blood  products are needed urgently, and it is imminent to ensure the easy access.4 Moreover, there are many contributing factors for limited availability of blood such as lack of donors, underprivileged stock and transportation. According to the World Health Organization (WHO) about 87.5% of developing countries are unable to meet even 50% of the blood transfusion requirement of their population.5

A number of reasons are reported in literature for the wastage of blood products, including expired blood bags, broken seals, error in temperature maintenance, damaged bags, return of bags after dispatch, clotted and contaminated blood components.1 In the United States, yearly wastage rate varies from 1% to 5% i.e. about 200,000 to one million units.6 However,  Guyana, Iran and India reported the wastage rate of about 25%,7 9.8%8 and 6.95% respectively.9

In Pakistan, about 1.2-1.5 million blood units are transfused annually.10 Recently it has been reported that Pakistan is facing a blood product shortage of about 40%.10 This shortage is followed by irrelevant use of 25% of whole blood and 80-85% of blood products.11,14 By focusing on the optimum use of blood and its products one can minimise the shortfall.

It was an observational study conducted at NIBD and BMT, PECHS campus Karachi, Pakistan from February 2018 - February 2019. Approval was taken from the institutional review board before starting the study. The study was based on statistical data available from the blood bank of the institute. Blood product consumption and wastage data was retrieved from internal software 'zaviya' which is used for maintaining a record of availability of blood product, issuance, usage and wastage. Variables for the study included total number of blood products made, number of each product, total number of wastage of blood products, number of wastage of each product and reasons of wastage. Microsoft Excel was used for preparation of the data sheet. Statistical analysis was done on Statistical Package for the Social Sciences (SPSS) version 23.0. Frequencies and percentages were calculated for qualitative variables.

During the study period about 960 donations were received, from which 2,880 blood product bags were prepared including 960 (33.33%) each of PRBCs, PLT and FFP. Overall wastage rate for blood product was estimated as 102 (3.5%). PRCBs and PLT were fully consumed, although shortage was observed for both products. Out of 960 FFP only 858 (90%) were consumed and 102 (10%) were not consumed and were wasted. Consumption and wastage rates are shown in Figure 1. 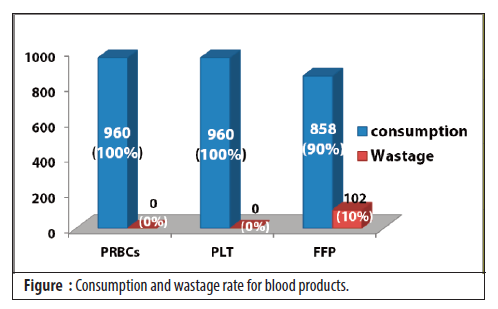 The common reasons of wastage of blood products are listed in table 1.

Blood is an important resource and its products are used in hospitals across the world to save human lives. Blood donations are limited, while its need is increasing globally and, hence, health care systems face lack of supply of blood products. Wastage of blood products is another important issue.8 This study was conducted to highlight the product consumption and wastage rate and also elaborate various reasons of wastage of blood products at NIBD and BMT in order to minimise the wastage and ensure the availability of blood products whenever needed. During the study, 960 donations were received from which 2,880 blood product bags were made, including 960 (33.33%) each of PRBCs, PLT and FFP. The overall wastage was estimated as 3.5%. PRCBs and PLT were fully consumed while the shortage of both products was seen which was fulfilled by arranging these products from outside. Out of the 960 (33.33%) FFP bags 102 (10%) were wasted due to various reasons, including the expiry of unused products 60 (59%), broken bags 30 (29%), temperature mismanagement 8 (8%) and contaminated products 4 (4%). A study conducted in Guyana, from July 2012 to December 2014, reported the collection of 16,426 units of blood products. Blood wastage estimated for the years 2012, 2013 and 2014 were 487 (11.7%), 1,892 (45.5 %) and 1,788 (42.9 %) units respectively. According to Kurup R, et al reasons of wastage were broken bags 30 (1.7%), broken seal 99 (5.5%), broken cold chain 63 (3.5%), clotted blood 12 (0.7%), component with red cells 3 (0.2%), expired units 1,586 (87.7%) and return after 30 minutes 13 (0.7%).7 Similarly, our study revealed highest wastage due to expiry. In 2011, another study was conducted at Karnataka which reported the highest reason of wastage as blood contamination.15 In our study no such observation was found. In 2014, another study from Iran concluded the collection of 30,913 blood products including PRBCs 18,123 (58.6%), FFP 4,913 (15.8%), PLTs 6,695 (21.6%), whole blood 100 (0.3%) and cryoprecipitate 1,082 (3.5%) and reported the wastage rate of 9.85%. According to individual products, the wastage rate was 59.4% for PRCBs, 22% FFPs, 16% PLT and 2.4% cryoprecipitate.8 Similarly, a study conducted in India reported collection of 66,255 blood units out  of which 44,617 were whole blood and other blood products were 21,638 PRBCs, 6,840 PLT, and 14,372 FFPs. The wastage rate was reported as 6.95%, out of which the wastage rate for PRBCs, PLTs, FFPs was 2.26%, 28.39% and 5.36% respectively.9 In our hospital, whole blood is not dispensed as per policy. In 2010, a study conducted at the teaching hospital of Semnan University in Iran revealed a high wastage of PRBCs which is contrary to our study findings. According to the study a total of 1,152 PRCBs were delivered to hospital out of which 759 (65.9%) were wasted and only 393 (34.1%) were consumed.16 According to WHO, some studies reported the high wastage reason for FFPs as short shelf life. Once prepared, FFPs have a shelf life of 24 hours.17 This could be the reason of FFPs expiry at our institute. Only 106 countries have national guidelines for blood transfusion. Hence, non-genuine transfusion is also an issue that leads to shortage of blood.8 In Pakistan, a study reported non-genuine transfusion rate in public and private sector as 45.90% and 30.60%.14 Australian Red Cross emphasised a number of policies that should be followed by blood banks and hospitals to reduce wastage rate including review temperature management plan, out-sourcing of near expiry blood products, proper handling and good inventory system.18 World Health Organisation also recommends clinical guidelines for blood transfusion to be followed and prescribed when other techniques cannot viably control mortality. Availability of blood is limited. Hence, it is the necessity to execute policies for efficient transfusion and prevent wastage to fulfil blood requirement.17

In our study, highest wastage rate was observed for FFPs. However, PRBCs and PLT were fully consumed, shortage was faced for both products. There is a need to make policies and strategies to minimise wastage of blood products through collaboration with other blood banks. Donation is one of the options to utilise blood products more effectively, especially FFPs. There is also a need to educate people to donate blood voluntarily and also train the staff for better clinical use of blood products.

Disclaimer: Abstract has been presented at International society of blood transfusion (ISBT), Basel 2019 as poster.

9.      Kanani AN, Vachhani JH, Dholakiya SK, Upadhyay SB. Analysis on discard of blood and its products with suggested possible strategies to reduce its occurrence in a blood bank of tertiary care hospital in Western India. Global J Trans Med. 2017; 2:130.