Objective: To evaluate the frequency of alpha thalassemia and detect mutations in the alpha genes in individuals undergoing premarital screening.

Results: Of the 3,970 samples analysed, 1,859(46.83%) were from males and 2,111(53.17%) from females. The overall frequency of suspected alpha thalassemia was 4.43% based upon haematological parameters including complete blood count and haemoglobin electrophoresis. Overall, 80 suspected samples were selected for genetic analyses, and, of them, 76 (95%) were positive for deletional and non-deletional mutations of alpha-globin genes, while 4 (5%) were negative for any of the 21 mutations tested.

Conclusion: Alpha thalassemia was found to be highly prevalent in the study area.

Alpha (α) thalassemia (Thal) is a clinical condition characterised by molecular aberrations in the α genes or their regulatory elements, resulting in reduced synthesis or absence of α chains. Contrary to beta (β) gene, which produces globin chains as one gene one chain synthesis, α globin chain synthesis occurs as a result of two coding genes α1 and α2 located on chromosome 16. Deletions and/or non-deletional mutations affecting one or both α genes are the major molecular genetic lesions in α-Thal. Almost 40 deletional and 70 non-deletional mutations has been reported to cause α-Thal.1-3 Clinical features of carriers and patients with α-Thal show considerable variations ranging from asymptomatic to severe haemolytic anaemia or intrauterine death (IUD).4

Alpha-Thal (α+ and αo) cases have shown six most common deletions. Deletions found in α+ Thal affect single gene and are of two types i.e. -α3.7 and -α4.2. Africa, Mediterranean region and Asia are more prevalent with -α3.7. While -α4.2 deletions are most common in Southeast Asian and the Pacific islands. Alphao Thal is characterised by double-gene deletions. Examples of αo genes deletion include α - -SEA, α - -MED, -α20.5 and α - -FIL. As their names suggest, these are more commonly found in Southeast Asia, the Mediterranean region and the Filipina respectively.5,6

Saudi Arabia is one of the countries where haemoglobinopathies (HbPs) are the most prevalent. It was mandated by a royal decree in 2004 to do premarital screening for these genetic disorders. Since then, every Saudi individual getting married in the country has to obtain premarital screening certificate from an authorised premarital screening centre. During the premarital screening programme, all individuals are screened for HbPs, including sickle cell anaemia and Thal. A significant number of individuals are reported as “suspected for α-Thal”; as neither red cell indices nor biochemical parameters helps in establishing the definite diagnosis of α-Thal with one or two α gene deletions. Molecular studies are helpful in identifying the genetic lesions of α gene(s). The limitations of haemoglobin (Hb) electrophoresis in the diagnosis of α-Thal and significant number of suspected α-Thal cases have been reported earlier.7

A number of studies reported the prevalence of α and β Thal in the Eastern Province of Saudi Arabia,8-10 with no reported study of α-Thal in the Southwestern Region, especially the Jazan Region. The current study was planned to fill the gap by evaluating the frequency of α-Thal and to detect mutations in the α genes in individuals undergoing premarital screening in Jazan.

The cross-sectional study was conducted from April 2018 to May 2019 at King Fahad Central Hospital, Jazan, Saudi Arabia. After approval from the institutional ethics review committee and the scientific research ethics committee of Jazan University, the sample size was calculated in the light of population and prevalence variance reported in literature9 at 95% level of significance and 5% margin of error. The sample was raised using simple random sampling technique from among those visiting the premarital screening clinic.

Data was analyzed using SPSS 20. Kolmogorov-Smirnov test was used for checking the normality of data. It was expressed as mean±standard deviation (SD) and singnificance was checked using independent t-test. P<0.05 was considered statistically significant.

Of the 3,970 samples analysed, 1,859 (46.83%) were from males and 2,111 (53.17%) from females. The overall frequency of suspected alpha thalassemia was 4.43% based upon haematological parameters including complete blood count and haemoglobin electrophoresis. Overall, 80 suspected samples were selected for genetic analyses, and, of them, 76(95%) were positive for deletional and non-deletional mutations of α globin genes, while 4(5%) were negative for any of the 21 mutations tested. Various HbPs, including sickle cell trait, sickle cell disease, β-Thal with sickle cell, β-Thal trait, β-Thal major, α-Thal (suspected) or Thal variants , Hb H disease and Hb E were found in the screened population (data not shown). CBC results were noted (Table 1). 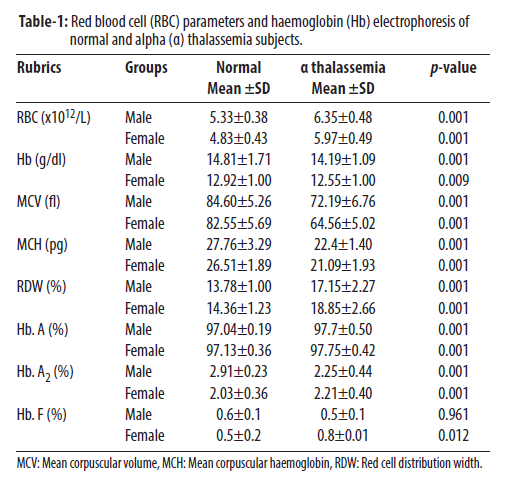 The prevalence of α-Thal in different Arab countries has been studied extensively.8,10-15 The current study was the first done in the Jazan area determining the prevalence of α-Thal gene polymorphisms in individuals visiting premarital screening centre. The overall frequency α-Thal was found to be 4.43% based upon haematological and molecular analysis. This finding is not in agreement with a study conducted two decades ago reported 0.55% percent individuals had α-Thal in this region.15 It also showed significantly higher difference in the prevalence of α-Thal in different regions of Saudi Arabia.15 In general practice at the premarital screening centres, these individuals are reported as “ suspected for α-Thal” and no definite diagnosis is made. It is highly recommended that the screening of α-Thal shall be included for effective screening programme, especially in the highly prevalent areas of the Saudi Arabia. The base of inclusion criteria was low red cell indices (microcytosis) and normal Hb electrophoresis. Prevalence of α-Thal in microcytic and hypochromic anaemia has been reported in several studies.16-18 Overall frequency of α-Thal in microcytic and hypochromic anaemia was 12.7%, 46% and 78% in Indian, Turkish and Iranian population respectively.16-18 The current study showed the highest percentage of α-Thal in subjects with low red cell indices and normal Hb electrophoresis.

Molecular analysis showed six different mutations in α genes in the studied population. The most common deletional mutation detected was –α3.7 (75%). Out of 75% –α3.7 positive cases, 57.5% individuals were homozygous

(-α3.7/–α3.7) and –α3.7α/αα heterozygosity was found in 17.5% cases. High prevalence of –α3.7 has been reported by other researchers as well.8,10,11,19 Heterozygous poly A mutation (–αPolyA1 α/αα) was found in 5% of the studied population. Poly A mutation has already been reported in Saudi population of Eastern province.8,19,20 One study in the Eastern province found 1.78% of –αPolyA1 mutation in transfusion-dependent α-Thal patients and healthy individuals.11

– –MED, – –SEA, – –THAI, – –FIL, –(α)20.5, gene triplication αααanti 3.7 were not observed in this study. Reasons may be low frequency of these mutations, different ethnic groups and geographic location. Homozygous –αIVS1 gene deletion was found in 2.5% cases. Again, to the best of our knowledge and extensive literature search, this mutation has not been reported in any study conducted in the country, but this mutation has been reported in other Arab countries (Table 3).

The current study has its limitations. Gene sequencing for α-Thal-positive individuals was not done due to limited funds and limited time. Similar studies shall also be conducted in other parts of the region, like Sabia, Al Fifa, Farasan Island, to establish guidelines and adding the screening of α-Thal in the premarital screening programme.

A significant number of individuals had α-Thal in the Jazan area. It is recommended that screening of α-Thal shall be included in the premarital screening programme.