The purpose of this survey was to evaluate the level of awareness and practices regarding macular ganglion cell complex (GCC) scans for early detection of glaucoma. The study design was descriptive cross-sectional and the sampling technique was non-probability convenient method. Data was collected through an online survey, from 100 practicing ophthalmologists and optometrists of Pakistan in two weeks, from January 20 to February 03 2019. Data were analysed using Microsoft Excel 2016. From the results it is strongly evident that significant number of respondents recorded the retinal nerve fibre layer (RNFL) to be the first layer affected as glaucoma progresses, which depicts lack of knowledge among eye care practitioners. Furthermore, both the groups (ophthalmologists and optometrists), used macular GCC scan the least as compared to the RNFL (optic nerve head) scan and visual field tests for early diagnosis of glaucoma. It demonstrated lack of knowledge and practices of macular GCC scan for glaucoma among eye care practitioners.

Glaucoma is an irreversible, chronic progressive optic neuropathy resulting in characteristic visual field loss. Not a single risk factor such as raised intraocular pressure (IOP) is enough to predict a multifactorial optic neuropathy.1 Traditionally, the ganglion cell damage has been evaluated on the basis of optic nerve hypoplasia (ONH) status, that is increased cup/disc ratio, neuro-retinal rim thinning, notching followed by characteristic visual field defects.2 Unfortunately, it is too late for glaucoma to be detected at this stage because unless approximately 40% of the retinal ganglion cells are lost this loss cannot be detected on threshold visual field defect.3

The optical coherence tomogram (OCT) is second to none in its ability to detect earliest glaucomatous changes at the cellular level. The determination and measurement of ganglion cell complex (GCC) through spectral-domain OCT (SD-OCT) can be the foremost detector of glaucomatous damage than the simple retinal nerve fibre layer (RNFL) thickness measurement around the ONH.5

The purpose of the study was to assess the knowledge, attitude, and practices regarding investigation tests in glaucoma in general and the significance of GCC macular analysis in particular.

The descriptive cross-sectional study used a non-probability convenient sampling technique. Questionnaires were filled by experienced eye care practitioners who are ophthalmologists and optometrists in different areas of Pakistan. The questionnaire had 10 questions regarding the study objective. (Figure 1). 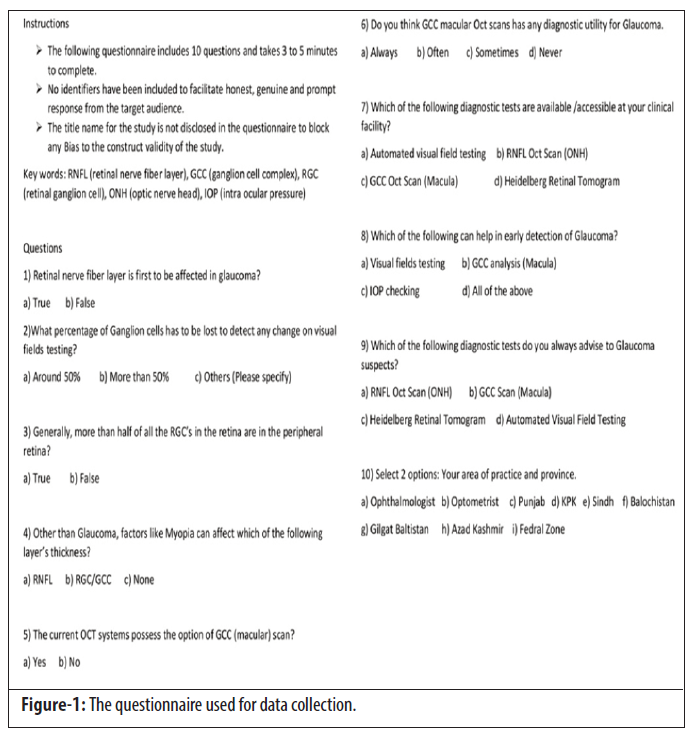 Some of the questions were designed to judge the gross concepts whereas others were based on the fine concepts in investigations and pathogenesis of glaucoma at the level of retinal layers. Some of the fundamental concepts in the early pathogenesis of glaucoma were targeted in the research tool (questionnaire) to evaluate the awareness level and use of tests for detection of early glaucoma. The first six questions evaluated “knowledge” regarding the comparative significance of the GCL and RNFL in the macula and optic nerve head, respectively. The questionnaire was launched via an online software. The survey was open for two weeks, from January 20 to February 03 2019, and data from 100 respondents from Pakistan was collected. The questionnaire was carefully designed to measure the desired variables efficiently and was evaluated by peers before launching. The questionnaire did not include any personal identifiers to ensure prompt and genuine responses from the target audience. The title name of the study was not disclosed in the questionnaire in order to block any bias to the construct validity of the study. Data were analysed and interpreted using Microsoft Excel version 2016.

During the specified period, 62 optometrists and 38 ophthalmologists responded to the survey. 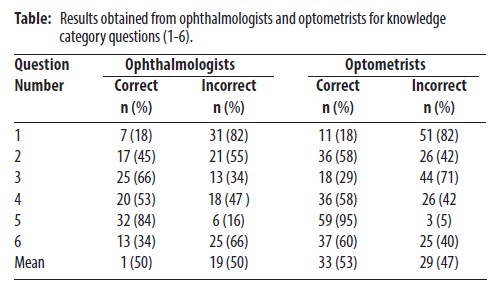 The second variable in this study was practices regarding the GCC macular OCT scan for early detection of glaucoma. The last three questions were aimed to determine the attitudes and practices as stated earlier. 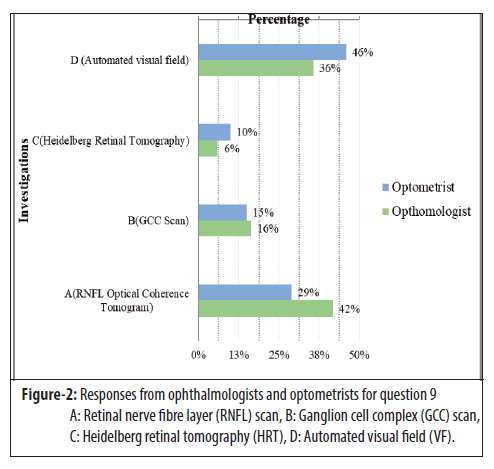 (Figure 2) represents question 9 (Which of the following diagnostic tests do you always advise to glaucoma suspects?). The responses were again segregated into two groups, that is ophthalmologists and optometrists. The first diagnostic test that was highly advised by the ophthalmologists turned out to be the RNFL optic nerve head OCT scan (42%), followed by automated VF (36%) and GCC macular OCT scan being advised by 16% of the ophthalmologists. Among the group of optometrists, the highly advised diagnostic test for glaucoma suspects was automated VF that is 46%, followed by RNFL optic nerve head OCT scan by 29% and only 15% of the respondents advised the GCC macular OCT scan. The least advised test, however, in both the groups was the Heidelberg retinal tomography (HRT) as shown in figure 2 that is 6% and 10% in ophthalmologists and optometrists, respectively.

However, 83 (83%) responses for question 7 showed that Automated VF testing was the most accessible test. Second-most accessible test was OCT RNFL 52 (52%), followed by GCC scan 28 (28%) and HRT being the least available test among all eye care practitioners.

Based on established literature, the retinal ganglion cell death is the main event initiating glaucomatous changes at the retinal level. It starts with the damage to the dendrites of the RGC which makes the IPL, followed by the GCL layer and finally the axons RNFL.6 From the results of, it is strongly evident that a significant number of respondents recorded RNFL to be the first layer affected in the glaucomatous changes, which was surprising and depicts a lack of knowledge among eye care practitioners. Similarly, results suggest that it’s the visual field test which is the most available, accessible and advised for glaucoma suspects, provided we know that the automated VF testing in glaucoma has ideally to be exercised for monitoring the progression and not the pre-perimetric detection.

As far as the practices are concerned, visual field testing was found to be the most advised and most available test, followed by the RNFL (optic nerve head) OCT.

The results demonstrate some of the respondents seemed cognizant about the significance and utility of GCC macular OCT and its precedence over RNFL assessment in early detection of glaucoma. But the practices reflected otherwise. It also shows that our eye care practitioners were not well aware of the SD-OCT system and how to utilise it for the GCC scans. Although this scanning modality is present in all the OCT systems. We believe both GCC analysis and RNFL assessment are important for detection and management of glaucoma.

Limitations of the Study

Non-probability sampling method was used. It relies on the assumption that the characteristics are evenly distributed within the population, which make the sampler believe that any sample so selected would represent the whole population and the results drawn would be accurate. The survey duration was two weeks and 100 respondents replied to it. The sample size being less was considered as representation of the eye practitioners (ophthalmologists and optometrists).