Management of endogenous Cushing syndrome is based on its aetiology. Increased Adrenocorticotropic Hormone (ACTH) levels are the most common cause of this disorder and, therefore, it is critical to determine the source of ACTH before further management. Dynamic post contrast MRI is currently the most common investigation implied to diagnose pituitary adenoma; however, it comes with the drawback of low specificity and high false positive results.

Inferior petrosal sinus sampling (IPSS) is an established invasive procedure performed to differentiate central versus peripheral source of ACTH which, in turn, results in hypercortesolaemia. This is a series of 14 patients who underwent IPSS at the Department of Radiology, Aga Khan University Hospital, Karachi, from January 2006 to December 2018. The case series emphasises the role of IPSS in the management of ACTH-dependent Cushing syndrome and combined efficacy of Dynamic post-contrast MRI and the procedure under focus.

Adrenocorticotropic hormone (ACTH) acts on the middle layer of adrenal cortex, known as zona fasciculata, resulting in production of cortisol. Increased serum ACTH levels, result in increased stimulation, which in turn results in Hypercortisolaemia, broadly referred to as Cushing syndrome.1

ACTH is produced by pituitary gland and hence a functional pituitary adenoma can result in hyper secretion of ACTH, referred to as Cushing disease.2,3 Another source for abnormal high serum levels of ACTH can be an Ectopic tissue, such as a carcinoid tumour, in which case the spectrum is known as Ectopic Cushing syndrome.4-6

Determining the source is important, as it has therapeutic implications.7,8 Dynamic MRI of the brain with contrast can reliably detect a pituitary adenoma; however, literature reports low specificity and high false positive results associated with this investigation. Moreover, prevalence of asymptomatic pituitary adenomas in general population is potentially deceptive. In addition, it has no role in identifying Ectopic source.9,10 Inferior petrosal sinus sampling (IPSS) is an invasive procedure performed by an interventional radiologist to determine the source of elevated serum ACTH.11 With limited accuracy it can also allow lateralisation of the pituitary adenoma within the pituitary gland.12 The common indications for performing IPSS include inconclusive MRI findings, persistent high ACTH levels post-pituitary resection, discrepancy between clinical, biochemical and imaging picture.13,14 Complications with BIPSS in experienced hands are extremely rare. Most common complication is groin haematoma. Other rare complications include a brainstem haemorrhage or non-haemorrhagic brainstem infarction.15,16

A 68-year-old female, who was a known case of diabetes mellitus and hypertension, presented with a history of weight gain by 8 kg in the last 24 months, swelling on the feet and face, central obesity, easy bruisability, and muscle weakness.

She underwent Dynamic MRI of the brain with pituitary protocol which revealed possibility of a questionable pituitary adenoma on the left side of the gland. (Figure 1). 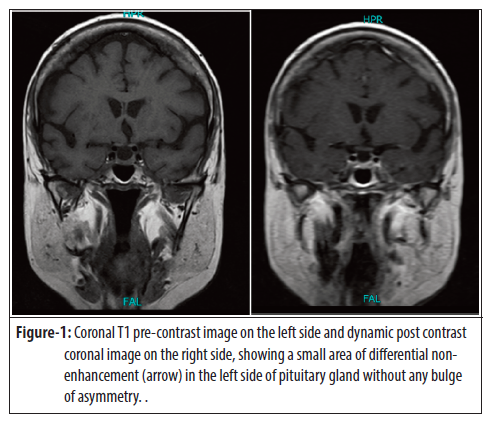 To solve the mystery, the patient subsequently underwent inferior petrosal sinus sampling, results of which were suggestive of peripheral source of ACTH. (Table 1).

As a result, the patient underwent radiological surveillance; CT examination of the chest showed a well-defined soft tissue density nodule in the left upper lobe; however, this was too small to be characterised and hence follow up was suggested. On six-month follow up CT examination of the chest, increase in size of this nodule was noticed. PET CT scan was performed, which showed no abnormal FDG uptake anywhere in the body. This nodule was excised and histopathology revealed bronchial carcinoid. Subsequently, the patient’s ACTH levels went down and her symptoms improved.

In another case, a 36-year-old male presented with a history of generalised body swelling and decreased vision. His serum ACTH and cortisol levels were elevated. Subsequently, the patient underwent Dynamic contrast enhanced MRI brain examination, (Figure 2) which revealed normal enhancement of the pituitary gland with its normal contour. 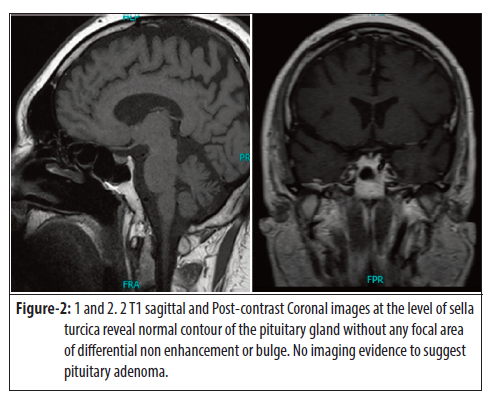 No area of differential non-enhancement or focal bulge was seen. The study was negative for pituitary adenoma. For further investigation, the patient underwent bilateral inferior petrosal sinus sampling, the results of which were suggestive of a central source of ACTH with left preponderance. (Table 2).

Subsequently, surgery of the pituitary gland was performed and histopathology confirmed the diagnosis of pituitary adenoma.

We retrospectively reviewed our charts for patients who underwent inferior petrosal sinus sampling at the Department of Radiology, Aga Khan University Hospital, Karachi, from January 2006 till December 2018 with preliminary diagnosis of ACTH-dependent Cushing syndrome. Our inclusion criteria was: patients aged between 18-70 years; those who underwent BIPSS at our institute during the study period; patients who, after or before the procedure, underwent concomitant MRI or biopsy for analysis. Patients below the age of 18, patients above the age of 70, patients who were lost to follow up and who did not have MRI or histopathology available for comparison, and all those patients who had sampling error or in whom adequate samples could not be collected were excluded. In total, 23 patients underwent bilateral inferior petrosal sinus sampling at our institute during the study period. One patient, a 13-year-old male, was excluded because of age criteria. In one case adequate number of samples could not be obtained, while seven cases had no MRI or histopathology correlation available for comparison. Hence, the final cohort included 14 cases including 9 males and 5 females with mean age 40±14 standard deviation.

Each case in the final cohort had an MRI correlation available for comparison; however, histopathology correlation was only available in 10 cases.

On the basis of this, two by two table, results were calculated and IPSS sensitivity was found to be 77%, while specificity was 40%, positive predictive value (PPV) 70%, while negative predictive value was (NPV) 50%. The overall accuracy of the procedure was found to be 64%.  When the sample size was narrowed down to those cases in which histopathology correlation was available, improvement in all indicators (Table 4) with accuracy of the procedure increasing to 89% was observed.

Sensitivity and specificity calculated in our study is low compared to the literature.19,20 However, in 10 cases from our cohort, with available histopathology correlation, IPSS made the wrong call on only one occasion, which points out to the reliability of the test. Hence, this can be assumed that non-availability of histopathology correlation in the rest of the cases may have impacted our results. Amongst the cases where both MRI and IPSS were positive for pituitary adenoma, none of them turned out to be negative at histopathology, suggesting high combined accuracy of both the procedures when performed together.

Inferior petrosal sinus sampling can help detect a peripheral source, which might otherwise go undiagnosed.21 In our cohort, two cases were eventually diagnosed as bronchial carcinoids, in which IPSS had detected a peripheral source. Although our results are not recommending it as a gold standard, however, if performed in conjugation with Dynamic post contrast MRI, it can improve the diagnostic reliability as well as prevent false positive results.

Inferior petrosal sinus sampling (IPSS) is a reliable and safe invasive procedure which can help differentiate Cushing disease from Ectopic Cushing syndrome, along with high combined accuracy of IPSS and MRI brain pituitary protocol. This test can be a useful tool in cases where diagnosis is difficult.