Conclusion: There was a high prevalence of obesity, hypertension and smoking in the patients undergoing coronary artery bypass graft surgery at age <50 years.

The incidence of coronary artery disease (CAD) at age <45 years is characterised as young CAD.1 However, numerous studies have deliberated the age limit varying from 35 years to 55 years in the spectrum of young CAD.2-4 This field of cardiology has acquired significance recently due to higher prevalence in this age group over the last few decades, with fluctuating risk factor profiles and alteration in prognosis as well as longevity after an acute coronary episode.

Prevalence of conventional risk factors like hypertension (HTN), diabetes mellitus (DM), smoking, dyslipidaemia and obesity accounts for about 85% to 90% of premature CAD patients. Often young CAD patients have multiple concomitant risk factors contributing to the disease.5,6 The most common risk factor associated with young CAD seems to be smoking. The prevalence of smoking in individuals aged <45 years, with CAD, was documented as 60-90% compared to 24-56% in individuals aged >45 years.7 Smoking in the presence of additional risk factors, like DM, HTN and obesity, predisposes a young individual to increased risk of future acute coronary events.7,8

The descriptive cross-sectional study was conducted at the Armed Forces Institute of Cardiology and the National Institute of Heart Diseases (AFIC/NIHD) from January 1, 2015, to April 24, 2018, and comprised patients aged 18-49 years who underwent elective CABG. After approval from the institutional ethical review board, the sample size was calculated with 29% prevalence noted in statistics.9 To increase the validity of results the sample size was increased over four-fold. Patients who had undergone emergency CABG were excluded. A questionnaire was designed to collect data from the patients that included history and biochemical markers.

HTN, DM, smoking, serum cholesterol, family history of cardiovascular disease, and body mass index (BMI) were studied as the risk factors in patients. HTN was defined as systolic blood pressure (SBP) >140mmHg and diastolic blood pressure (DBP) 90 mmHg, as per the World Health Organisation (WHO) criteria10 and was further categorised into two groups controlled with medication and uncontrolled HTN. DM was defined as random blood glucose (RBG) >200mg/dl or fasting blood glucose (FBG) >126mg/dl.11 Diabetics were divided into three sub-groups: those on oral therapy, on insulin, and patients whose diabetes was controlled by diet. On the basis of smoking history, the subjects were classified into three categories; current smokers, past smokers who had given up smoking >8 weeks ago, and non-smokers who had never smoked. Serum cholesterol level was divided into three ranges; normal, >200 and level >300. Patients were asked about their family history regarding CAD. Body mass index (BMI) was calculated by dividing the patients’ weight (in kg) by the patients’ height squared (in m2). BMI values were categorized into normal (18.0-22.9 kg/m2), overweight (23-24.9 kg/m2) and obese (>25 kg/m2).12 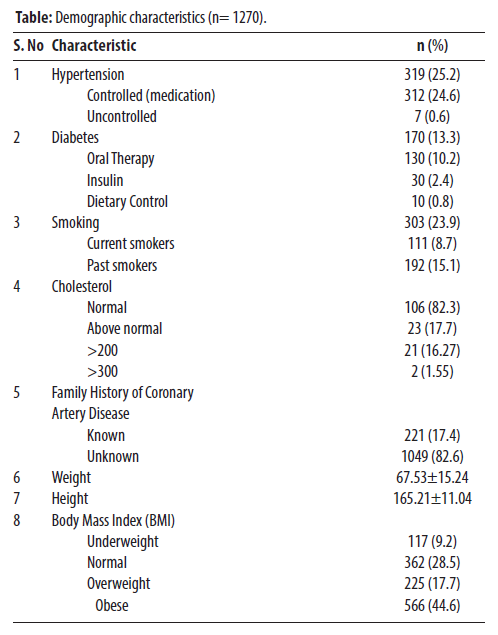 The current study looked into six risk factors for ischaemic heart disease (IHD) in patients aged 49 years and younger. IHD was more prevalent among the males. The most common factor present in the study population was a raised BMI, followed by HTN, smoking, family history and DM. DM was the least common risk factor.

Conventionally, coronary heart disease is considered a disease of the male gender, but it is becoming common in women and a higher prevalence of HTN, DM and obesity in older women has led to an increase in the number of women suffering from coronary heart disease.13 Smoking and lipid abnormalities in women also play a major role.13 IHD is the most common cause of death among women in western countries.14 Another study showed that heart disease develops 7-10 years later in women than in men.15

In the current study, 319 (25.2%) patients suffered from HTN. A study in India stated 70.9% hypertensives.16 A study in Iran on CAD patients aged <45 years showed 37% HTN.17 In a Karachi–based CAD analysis, only 19% patients were hypertensive18 which was lower than our findings.

As for hyperlipidaemia, it was 23(17.7%) in the current study compared to 39% in Iranian patients.17 A study in Seattle reported that 31% patients <90 years had hyperlipidaemia, and the lipid abnormalities were more common among males <40 and females <50 years.22

The current study has limitations. It was done at a single centre and the cholesterol levels were recorded for only a portion of the sample. Also, the study population was limited to elective patients only, and majority belonged to a poor socioeconomic background and were mainly uneducated. Thus, they were unsure of their family history.

To calculate the true incidence and prevalence of these risk factors, future studies are required to evaluate the epidemiological transition toward a rising trend of CAD in young population and to guide evidence-based practices in prevention and screening of high-risk individuals.

There was a high prevalence of obesity as well as non - modifiable risk factors, like hypertension, in patients aged <50 years undergoing CABG surgery.

10.    Organization WH. Hypertension control: report of a WHO Expert Committee. 1996.

12.    WHO. Appropriate body-mass index for Asian populations and its implications for policy and intervention strategies [Internet] Available from: https://www.who.int/nutrition/publications/bmi_asia_ strategies.pdf [Cited 05 December 2020]