Methods: It was a descriptive cross sectional conducted at Department of Microbiology, Fauji Foundation Hospital Rawalpindi (FFH), Pakistan. Samples were collected from 1st November-31st May 2018. Total 75 samples were collected during the period. Consecutive non-probability sampling technique was utilized. Specimens were collected from nose, axilla and groin of preoperative patients. Methicillin Resistant Staphylococcus aureus was identified if only isolated from these sites. Patients were followed till his/her discharge from the hospital and if they developed infection post operatively, pus specimen from infected site was also collected and identified.

Conclusion:  The results of this study determined that Endogenous Methicillin Resistant Staphylococcus aureus (MRSA) could be isolated from patients going for surgery if microbiological screening was done at the time of admission. This could prevent patients from Surgical Site Infection Post operatively by these endogenous MRSA. This search and wipe out strategy is able to curtail the events of outbreak, reduce hospital stay and decrease budget of the hospital by providing guidance in choice of empirical therapy for infection.

Staphylococcus aureus is capable of establishing a broad spectrum of interactions with human. It can be a part of the normal flora and cause a variety of illnesses ranging from mild infections compromising skin, soft-tissues to severe diseases such as necrotizing pneumonia, bacteraemia, osteomyelitis, toxic shock syndrome, urinary tract infections and surgical site infections (SSIs).1

Staphylococccus aureus acquires resistance to many antimicrobial agents. The first isolation of methicillin-resistant S. aureus (MRSA) was reported in 1960.2 Since then, the occurrence of MRSA in SSIs is increasing3 and accounts for 24.45% of SSI in general hospitals.1 An increasing cases of SSIs produced by MRSA acquired in the community have been reported. They were called as community associated methicillin-resistant S. aureus (CA MRSA). These can be prevented by antibiotic prophylaxis as bacteria implicated in SSIs include those, which are conceded by patients themselves (endogenous flora), or those that might be acquired in the operating room (exogenous flora), which are known as hospital associated methicillin-resistant S. aureus (HA MRSA).4 Infection caused by microorganisms from endogenous source is more common than an external source following surgery.5 Recent studies have suggested that these endogenous MRSA might be encroaching on hospital settings6 and significant proportion of them are caused by the same strain that colonizes in the nasal mucosa.7

Endogenous MRSA could be easily prevented by eliminating their carriage through proper targeted screening and source control. This would not only decrease burden of disease but also have a significant impact on hospital budgets and patient’s health, their diagnosis must be anticipated and therapy improved. Therefore, the purpose of this study was to determine the frequency of colonized MRSA in patient’s different body areas like nose, axilla and inguinal region pre operatively and post-operative if they are isolated as a source of wound infection.

The study was carried out at Department of Microbiology, FFH from 1st November 2018 to 31st May 2019. After taking consent, a total of 75 swabs were included in the study. Keeping the Confidence level 95%, anticipated population proportion for MRSA in SSIs 0.25.1 Sample size was calculated by WHO calculator.9 The samples were taken from Nose, axilla and Inguinal area of the patients who reported in outdoor clinics for admission for surgery in different wards of FFH, Rawalpindi like Gynecology, General surgery, Urology and Neurosurgery, and MRSA was identified if isolated from these sites. These isolate were labeled and stored for further assessment. The patients were followed till his/her discharge from the hospital and if patient developed infection post operatively within his stay in the hospital, pus specimen from infected site was collected and MRSA, if present, was identified. If MRSA was identified preoperatively, both the isolates were assessed whether they are the same strains. All duplicate samples, patients already on treatment or taken antibiotics within last 48hour were excluded from study.

We applied phenotypic method to assess strain similarity, which included extended antibiogram and extended biochemical tests. If both the strains were found similar, then the source of post-operative MRSA infection was labeled as endogenous. Clinical samples were inoculated on Blood and MacConkey’s agar and incubated at 37oC for 18 to 24h. Staphylococcus aureus was identified by its colony morphology, positive Gram reaction, positive catalase and coagulase tests.10 Methicillin resistance of isolated Staphylococci was detected by agar disk-diffusion method (Kirby-Bauer) using a 30µg cefoxitin disk, according to the guidelines by Clinical and Laboratory Standards Institute guidelines (CLSI).11 According to CLSI, a zone diameter of ≤ 21mm was taken as resistant and a zone diameter of ≥22 mm as susceptible. Susceptibility to other antimicrobial agents was determined by the disk diffusion method in accordance with CLSI. The other antibiotics tested included Penicillin 10µg, Ciprofloxacin 5µg, Doxycycline 30µg , Gentamicin 10µg, Rifampicin 5µg, Linezolid 30µg, Chloramphenicol 300µg , Co-trimoxazole 25µg, Erythromycin 15µg, and Clindamycin 2µg (Oxoid Ltd). E-strip was used to assess susceptibility of Vancomycin as recommended by CLSI. S. aureus strain ATCC 25913 was used as quality control.

All ethical considerations and obligations were duly addressed and the study was conducted after approval of ethical committee.

Susceptibility of Endogenous & Exogenous MRSA to various antibiotics is shown in (Table: 3) 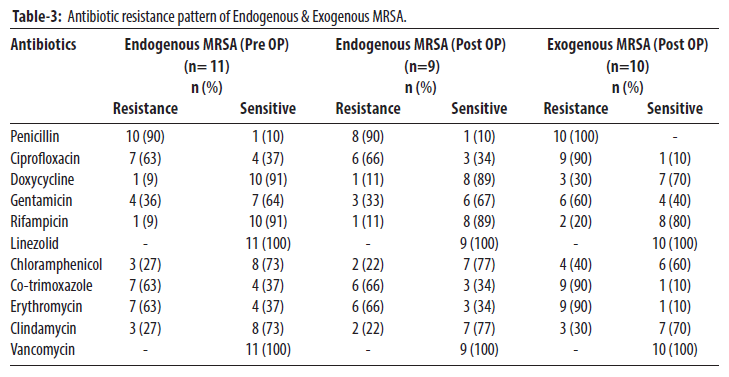 MRSA has ability to cause widespread diseases which range from soft tissue infection to more life threatening sepsis. Its remarkable resistance towards many drugs and the deadly outcome of its infections has become a big problem.12,13 Surgical patients are at soaring threat of infection if they are colonized with MRSA or if MRSA is inoculated into their surgical wound by unhygienic hands or instruments.14

Mean age (years) in this study was 45.63±17.81 with ranges from 18 to 75 years. A high proportion of patients in our study were observed from old age. Garcia supported our results regarding higher susceptibility in old age and recommended age as considerable factor in antibiotic selection.15 Comparable findings were of Naz R etal,16 who reported that peak incidence of SSI was observed in age group greater than 45 years. However, Ajao etal concluded that age does not bear a major impact in MRSA infections.17

The collected samples in our study had a slightly higher proportion (60%) of female patients. This is incongruity with previous study conducted on the subject within the country, which observed proportion of samples collected from male patients as 58%.18 A higher infection rate in male population was also observed in other countries as well for example in Poland.19 The main reason behind this discrepancy is basically FFH is a welfare organization for families of retired army personal.

MRSA (57.6%) was the predominant isolate from surgical site infections from our hospital, which is comparable to other local studies.5,12 as well as study from India.1,20 The predominance of MRSA seen in our study is related with endogenous source as the organism is a member of normal skin and nasal flora of the patients. Extended antibiogram showed that there were 9 (27.2) MRSA out of 19 (57.6) causing postoperative SSIs having the same antibiogram as the endogenous MRSA isolated preoperatively from same patients. These could be easily prevented by stringent surveillance and preoperative antibiotics. Extended antibiogram was also used by Yang from University of California, USA which suggested that difference in sensitivity could be used to label CA- MRSA and

HA- MRSA.21 While a study from Uruguay proved this by using genotyping and Pulse Field Gel Electrophoresis along with antibiogram, which is the limitation of this study.22

In our study, out of 75 cases majority of MRSA were from obstetrics & gynaecology (18.1%) followed by orthopaedics (15.1%) and surgery department (12.1%). These results are comparable to studies from neighboring country5 as well as local study from Karachi.23

Surgical Site Infections are the main contributors of health care associated infections. Rate of SSIs in our study was 33 out of 75, 44% which was in tandem with a local study carried out in Abbottabad, which showed an infection rate of 34% with 32 patients developing SSIs out of 95 patients.24 But frequency of SSI varied from 2.5-41.9%.25 Rate of SSIs is an important gauge of quality of surgical procedures in a hospital and it is different in different set-ups.

The results of this study determined that Endogenous Methicillin Resistant Staphylococcus aureus (MRSA) could be isolated from patients going for surgery if microbiological screening was done at the time of admission. This could prevent patients from Surgical Site Infection Post operatively by these endogenous MRSA. This search and wipe out strategy is able to curtail the events of outbreak, reduce hospital stay and decrease budget of the hospital by providing guidance in the choice of empirical therapy for infection.

23.    Mahmood A. Bacteriology of Surgical Site Infections and Antibiotic Susceptibility Pattern of the Isolates at a Tertiary Care Hospital in Karachi. JPMA. 2000; 50: 256-59.