Lipomas in the submandibular region are very uncommon. Large submandibular neck mass (greater than 10 cm) with a rapid growth rate, may raise concern about possible malignancy of salivary glands. Failure to distinguish salivary gland tumour and liposarcoma from a lipoma may represent a medico-legal pitfall. It is very important for the surgeon to rule out liposarcomas when dealing with giant lipomas in such regions. We report a case of a 65-year-old male who presented in the OPD with complains of pain and a 15x12 cm, giant submandibular solitary lipoma of anterior neck which had rapidly increased in size. The diagnosis of lipoma was confirmed on physical examination, radiological investigations and Fine Needle Aspiration Cytology (FNAC). The Patient underwent surgical excision. The surgery produced excellent cosmetic results and no functional impairment. This study illustrates the literature regarding aetiology, epidemiology, followed by diagnostic and treatment modalities of submandibular lipomas.

Lipomas are benign, slow growing mesenchymal tumours that are extremely rare in the head and neck region. Due to the absence of any symptoms, except swelling, in most of the patients, it is usually seen that the patients do not consult the surgeon for its surgical removal. This leads to late presentation. Lipomas can form in any part of the body and account for (5%) of soft tissue tumours, out of which 13% lipomas occur in the head & neck.1 The commonest location is the posterior neck, while the anterior neck and face are rare locations for head and neck lipoma.2,3

We are reporting a case of submandibular swelling existing for the last five years on an unusual site and clinical details, posing a challenge for diagnosis and management, followed by cosmetic and functional outcome.

A 65-year-old male presented to the general surgery OPD, complaining of enlarged mass in submandibular region. It had been present for over five years, but rapidly increased in size over the last six months. The patient denied any recent weight loss or pain associated with the mass.

Physical examination revealed an approximately 15×12cm, soft, mobile, non-tender nodular mass located on the left side of the neck below the mandible, crossing the midline, with no effect on deglutition. His oro-pharynx was normal with no lymphadenopathy. The mass appeared benign in origin but recent increased rate of growth raised concern for a malignant aetiology.

His USG revealed a 10x12cm, well-encapsulated soft tissue lesion, 5cm deep, separated from submental, submandibular, parotid and thyroid glands. Fine needle aspiration showed a few fat cells against a clear background, no atypical cells -- features suggestive of lipoma. CT scan revealed a well-defined smooth hypo-dense mass about 14 cm × 12 cm in transverse and longitudinal dimensions, respectively. The mass was well-circumscribed and had internal septa without evidence of invasion of adjacent structures. The density of the mass on CT suggested that the tumour was mostly composed of fat.

Under general anaesthesia, the anterior neck was exposed and accessed via a horizontal skin incision (Figure-1). 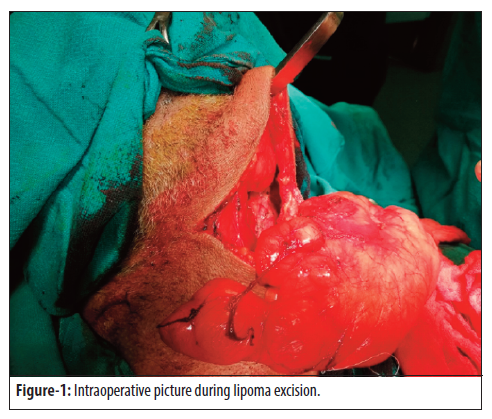 The platysma muscle was divided, and superior and inferior flaps were created. A large mass, approximately 14 cm in diameter, was excised in its entirety. Haemostasis was achieved with electrocautery, and the inferior flap was brought over the superior flap to measure skin redundancy. The mass and the redundant skin were both excised, and the tissue was closed in two layers after a 10 Fr drain was placed. The post-operative period was uneventful, and the patient was discharged from the hospital after the second day of the surgery. 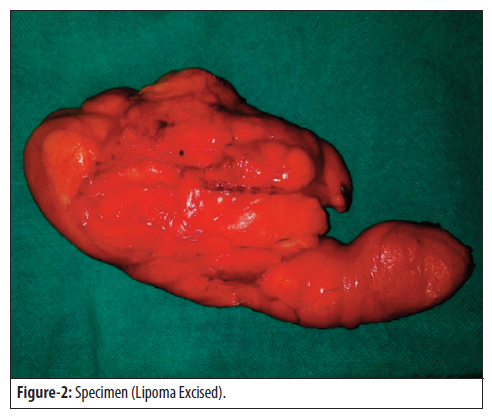 It contained mature adipocytes with no cellular atypia. Numerous fibrous bands through the specimen were evident. The final pathological diagnosis was lipoma.

The patient was seen one and three weeks postoperatively with excellent cosmetic results and no functional impairment. At one year follow up, he had no evidence of recurrence.

Informed consent has been taken from the patient for publication of the case.

The most common mesenchymal tumours in humans are lipomas. They usually occur in adults, between the ages of 40–60 years, and vary in size and number. Sanchez et al4 defined giant lipoma, as a lesion that measures at least 10 cm in one dimension or weighs a minimum of 1,000 grams. Conventionally, lipomas are divided into three types: superficial lipomas (arise within subcutaneous tissue); deep lipomas (arise within deep soft tissue); and periosteal lipomas (occur within the surface of the bone).5 In this case report, we discuss a case of giant lipoma in the neck, which is a rare site for lipomas to occur.

The exact aetiology of the lipomas is unknown. There are some associations of subcutaneous lipomas with hypercholesterolaemia,6 obesity,7 and trauma.8,9 They may also be associated with congenital syndromes including multiple hereditary lipomatosis, Gardner’s syndrome, Madelung’s disease and Dercum’s disease. However, none of these problems were detected in the present case.

The clinical course of lipomas depends upon the lesion’s size, location and rate of growth. Giant lipomas are mainly a cosmetic problem.10 They frequently present as painless, mobile, non-fluctuant palpable masses, which are well-circumscribed and are often overlooked by the patients until they acquire considerable size. This was a similar scenario in our patient, who also presented late with a giant lipoma.

Most lipomas pose no diagnostic dilemmas. History and clinical examinations along with biopsy exclude most of the differentials. However, CT or MRI may provide information that helps in distinguishing a benign fatty lesion from a malignant one. CT is the modality of choice to confirm lipoma. The lipomas appear as homogenous low-density areas with a CT value of -50 to -150 HU with no contrast enhancement. On CT scan, a capsule of lipoma is barely visible, or an adjacent mass effect may be the only clue to its presence

Treatment modalities for lipomas can be divided into non-excisional and excisional techniques. Non-excisional techniques involve steroid injections, which result in fat atrophy, and liposuction, which destroys the adipose tissue but not the fibrous capsule. Simple surgical excision is the most common modality for the treatment of lipomas. In this case, we chose surgical removal because the clinical features of the mass placed the patient at a higher risk of having a tumour with a malignant aetiology. The tumour was easily excised in its entirety through a horizontal incision.

This case shows the importance of familiarising ourselves with literature, and closely examine and diagnose aspects of malignancies and lipoma in the pre-operative period and then conduct a complete resection of the tumour and follow-up after the procedure.

Informed Consent: Informed consent from the patient has been taken.