Objective: To determine the impact of tinnitus-related handicap on daily living of tinnitus sufferers and factors associated with tinnitus severity.

Conclusion: Gender, hearing loss and type of tinnitus sound were found to be associated with the severity of the condition.

Tinnitus, a phantom auditory sensation, is derived from Latin verb “tinnire” meaning ‘to ring’.1 It is a symptom of some underlying disorder and can be subjective or objective. Subjective tinnitus is commonly referred to as hissing, buzzing, whistling, humming, crickets, blowing wind, running water or with complex tonal characteristics. Its intensity varies from imperceptible to very annoying level affecting the quality of life of the sufferers. The elderly affected by tinnitus suffer concentration difficulty, frustration, despair and may have abnormal behaviour, having significant impact on economy which can also result in huge personal financial losses up to the tune of $30,000 per annum.2

The prevalence of troublesome tinnitus increases with age, being 10-15% among the adult population,1 with a higher prevalence (7.05%) in Europeans and the lowest prevalence (1%) in Asians.3 However, in India a prevalence of 7% has been reported.4 The pathophysiological mechanisms of tinnitus are still not well-defined.4 Though traditionally considered to be of ontological origin, it is now considered to have a neuronal origin.5 A number of risk factors are implicated, including reduced hearing, ototoxic medications, head injury, anxiety and depression.6

Tinnitus is an area requiring further research. With no standardised test for diagnosis or presence of tinnitus, some subjective tests, like tinnitus pitch and loudness matching, are used for evaluation in addition to a detailed history and establishing the hearing status. Researchers and clinicians have developed subjective tests with a self-administered questionnaire to measure the impact of tinnitus.5 Tinnitus handicap inventory (THI) is a common tool used to screen for tinnitus disability / severity and planning management, especially counselling.7 With limited treatment options, including counselling and cognitive behavioural therapy, the development of new innovations in treatment targeting the brain are being considered.5

Further research has been recommended by different authors, including categorisation of individual tinnitus sensation and emotional and functional issues that are associated with tinnitus.8  The current study was planned to determine the impact of tinnitus on daily living of tinnitus sufferers, and factors associated with the severity of tinnitus handicap.

After approval from the advanced studies and research committee, Isra Institute of Rehabilitation Sciences, Isra University Islamabad, the sample size was calculated using Raosoft online calculator9 with 95% confidence level and around 8% margin of error, taking population size as 20,3,10 and 50% response distribution. The sample was rasied using non-probability convenience sampling technique.

Those included were tinnitus patients of either gender aged 15-75 years. Patients with inflammatory and obstructive lesions of the ear and vertigo and those who could not understand the questions because of language barrier and low intellectual abilities were excluded.

Data was collected using the THI English version7 related to handicap in their daily life because of tinnitus. THI measures subjective severity of the tinnitus handicap using the 25-item tinnitus handicap inventory scale.11 For each item on the inventory, the participant responds with “yes” (4 points), “sometimes (2 points) or “no” (0 point). These responses are summed up, with the total score ranging 0-100 points.  Depending on the total score, the handicap caused by tinnitus was categorised as slight, mild, moderate, severe and catastrophic.

Data was analysed using SPSS 21. Qualitative data, like gender, was presented as frequencies and percentages, while age of presentation was expressed as mean±standard deviation (SD). Chi-square test was used to find the associations between categorical variables. p<0.05 was considered statistically significant. 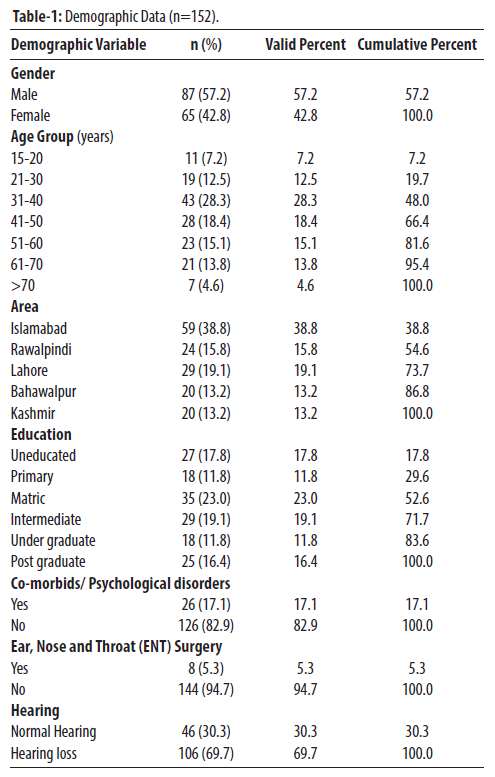 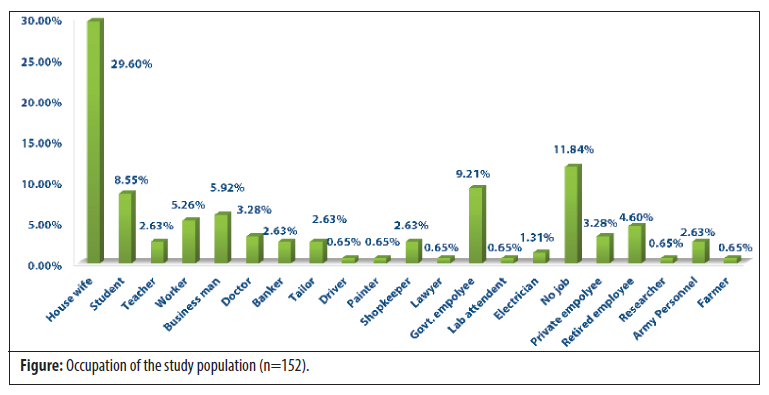 Severity was higher in males compared to females (p=0.04).  Association between age and tinnitus handicap score was significant (p=0.007). Significant associations of tinnitus were also noted with hearing loss, and tinnitus sound, while it was non-significant with the duration and site of tinnitus (Table 2). 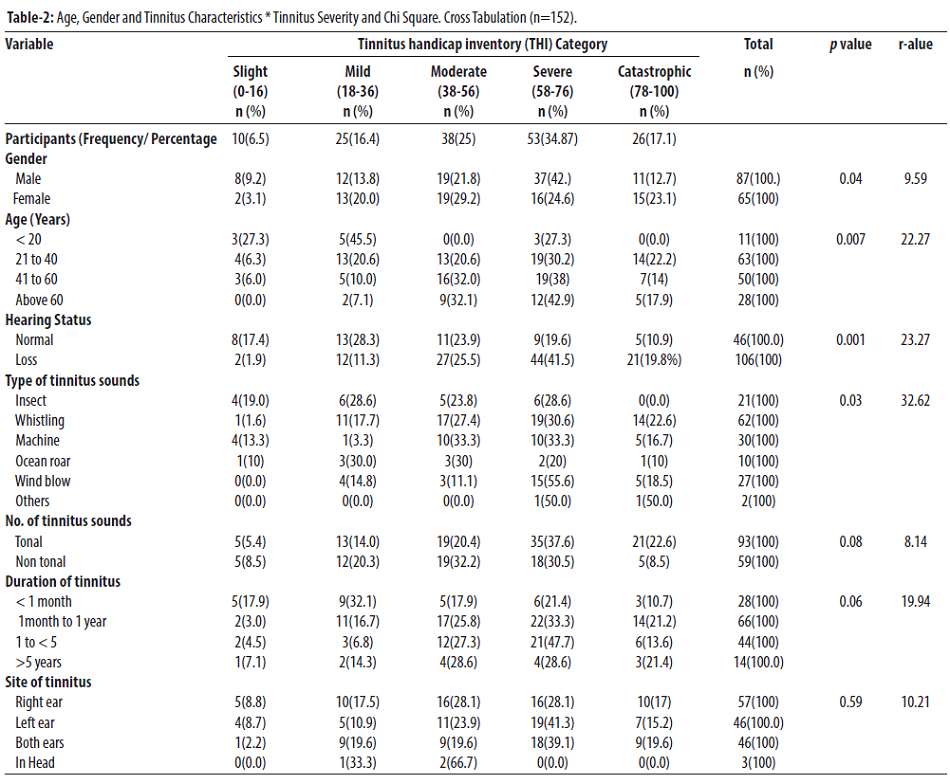 A wide range of tinnitus handicap was noted, extending from a handicap score of 0-16 (slight) in 6.58% to 78-100 (catastrophic) in 17.10%, with 51.9% cases having severe to profound tinnitus handicap affecting daily life. Similar wide-ranging results have been reported earlier.7,12,13

The current study found that most patients (34.87%) had grade 4 severe degree of tinnitus handicap. This was in line with a Saudi study,14 but in contrast with another study.7 The possible reason of higher percentage of grade 4 tinnitus handicap in the current study may be that most participants were suffering from hearing loss, which is another additional handicap that affects the quality of life.

Some studies have shown higher prevalence in female patients,4 while others have suggested higher prevalence in male participants.14 The possible reason of higher prevalence in men may be that they are bread-earners exposed to occupational noise more than women. The same was the case in the current study. Another study15 reported that females were significantly more affected by tinnitus stress, while still others7,12,16 reported a statistically non-significant association with gender.

In the current study, whistling was the commonest tinnitus sound, and there was significant association of tinnitus severity with the type of sound, with the whistling sound having the maximum severity. In contrast, a study reported high frequency of buzzing sound at 38%, followed by hissing sound (32%) and whistling and combination of sounds at 28% each.4 The significant  association of whistling with THI noted in our study could be due to the fact that whistling is a high-pitch sound which is a source of annoyance compared to low-pitch sounds.

Different studies also found that cases with more than one tinnitus sounds had more catastrophic effect than a single sound.4,7,8 The current study did not find any statistically significant difference in this regard.

A study7 noted no significant difference in THI score with unilateral or bilateral tinnitus,7 as was the case in the current study.

There was significant association between tinnitus and patients with hearing loss in  the current study which is in line with literature.15,18,19 In contrast, other studies7,16 did not note any difference in THI score for cases with or without hearing loss.

A study suggested that tinnitus is sub-auditory perception which increases in silent ambient environment.20 We may suppose that having less work and remaining longer time at home where auditory attention may possibly be more relevant for increasing the annoyance of such a perception.

Being a self-funded project, the study could collect data only from two cities, and also did not correlate THI with different degrees of hearing loss.

Gender, hearing loss and type of tinnitus sound were significantly associated with the severity of tinnitus.

Disclaimer: The text is based on an M.Phil. thesis.