Stroke, a neurological disorder, leads to long-term disability thereby greatly affecting gait and mobility. The purpose of the current study was to investigate the effects of progressive resistance training in both acute and chronic stroke patients. A quasi interventional study was designed and 46 stroke patients were recruited through convenience sampling technique. Sample size was calculated using epi-tool. Patients who had cognitive problems, balance impairments and contractures were excluded from the study. The study was conducted from January to June 2018, at Rafsan Rehab & Research Centre, Peshawar. Progressive resistance exercises starting at 50 % of one repetition maximum (RM) were performed three days/week and for a total duration of nine weeks. Blind assessor measured readings at baseline and after nine weeks. Gait dynamic index (GDI), Six-Meter Walk Test (SMWT) and Five Times Sit-to-Stand (FTSTS) tools were used to collect the required data. The data was analysed at baseline and after nine weeks on SPSS-20. After nine weeks of intervention significant improvement was recorded in patients on GDI (p<0.001), SMWT score (P<0.001) and FTSTS (p<0.001). Progressive resistance training improves mobility limitations and gait in both acute and chronic stroke patients.

Walking independently denotes a life-enriching ability in the course of one’s daily life.1 Stroke commonly affects walking ability along with other impairments in gait parameters; hence, restoring an optimal gait performance marks one of the major goals of stroke rehabilitation.2 Kim et al in their study states that exercises that predominantly increase muscle strength of lower extremities in stroke patients have shown significant improvements in gait and stair-climbing function, particularly by enhancing force generation through larger range of motion.3

Several factors are associated with typical gait abnormalities in individuals after a stroke including decreased velocity, impaired postural and joint control, asymmetry of stride length and time, lower limb muscle weakness, impaired muscle tone and other related factors. Among all, muscle weakness contributes greatly and is a common impairment in stroke patients leading to impaired gait performance. Both the ability and quality of walk is strongly associated and relies on strength of the lower extremity muscles. Optimal stroke rehabilitation necessitates improving patient’s gait performance and requires restoring muscle strength of lower extremities.4 Numerous researchers suggest resistance training for lower limb muscles in order to improve the ability to walk in stroke patients. Wenwen H.E. in a recent randomised control trial reports resistance training to be effective in improving gait.5 Similar results have been reported by some meta-analyses as well.6,7 However a systemic review evaluating resistance training reported that improved strength in stroke patients does not necessarily affect their ability to walk.8

Functional restoration in stroke patients along with other chronic diseases can be achieved by resistance training. Yet literature lacks evidence regarding studies conducted in Pakistan. The current study was aimed to evaluate the effectiveness of strength training in acute and chronic stroke patients in terms of gait improvement.

A quasi experimental study with a sample of 46 stroke patients of either gender was conducted to observe the effect of progressive resistance training on gait. There was only a single experimental group without randomisation and no control group. The experiment was conducted at the Rafasan Rehab Centre, Peshawar, from January to June 2018. Epi-tool was used to measure the sample with 4.9 standard deviation, 0.95 confidence level and desired precision 1.5.9 Patient recruitment was based on non-probability purposive sampling technique and inclusion criteria: 46 stroke patients with a minimum 24 score on mini mental state examination, able to follow three step command and age above 30 years. Patients who did not meet the criterion or those who had some other problems such as inflammatory joint problems, cognitive impairments, severe visual impairments, trauma, contractures, fractures or unstable and uncontrolled diabetes or hypertension were excluded. Informed consent form was signed by all the patients. The study was approved by Riphah Ethical Committee. The patients received intervention three days/week and for a total duration of nine weeks with progressive increase in resistance (started at 50 % of 1 RM and increased to 60% and 70%, respectively every three weeks). Blind assessor measured readings at baseline and after nine weeks. Final analysis was done using SPSS 20, for 39 participants after 7 patients dropped out.

Both the categories of stroke patients, i.e. acute and chronic, received the same treatment intervention with equal intensity and repetitions. Treatment was given for nine weeks (three days/week) and time for each session was 45 minutes. Resistance was initiated at 50 % of 1 Repetition Maximum and was increased to 60% and 70% for every three weeks, respectively. Major muscle groups targeted for strength training are listed in Table 1.

Significantly improved result with p-value 0.001 was observed in both acute and chronic stroke patients before and after the treatment, whereas there was no difference in the effect of intervention among the two categories.

Like Gait Dynamic Index significant improvement was also measured with P value 0.001 in both acute and chronic stroke patients before and after treatment for Six-Minute Walk Test and five Times Sit-to-Stand Test (Table 2). 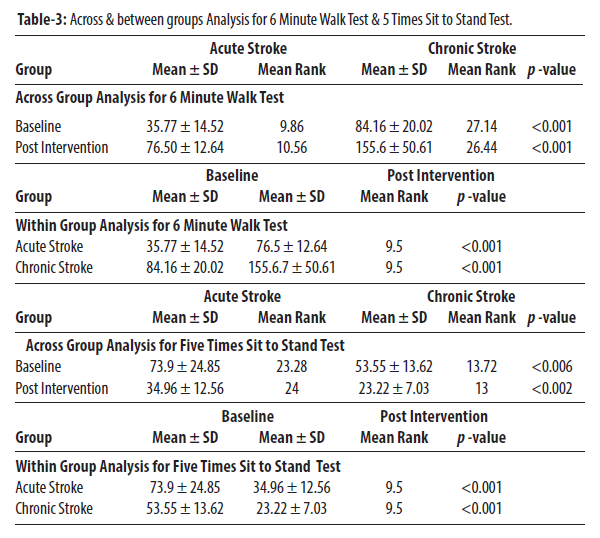 Findings of the study show that not only acute stroke survivors but also chronic stroke patients have the capacity to improve gait related functional outcomes by improving strength of the lower limbs. The effects of progressive resistance training on both acute and chronic stroke patients are equally effective. However, further studies especially randomised controlled trials should be conducted to further investigate the effects of progressive resistance training.