Neuroendocrine tumours (NETs) of the liver are generally metastatic lesions from broncho-pulmonary or gastrointestinal primary lesions. Liver is an unusual primary site for a NET with only 150 reported cases in literature.

We encountered two cases of primary hepatic NET (PHNET) at the Shaukat Khanum Memorial Cancer Hospital, Lahore. Both the patients had abdominal pain and hepatomegaly. Imaging revealed a large mass in the right lobe of the liver in both the cases. The tru-cut biopsy showed neuroendocrine tumour. Extensive workup to look for primary lesion elsewhere in the body turned out to be negative. One patient received neo-adjuvant chemotherapy along with right main portal vein embolisation. Once adequate future liver remnant was achieved, the patient underwent right hepatic trisectionectomy. In the other patient, anticipated future liver remnant was sufficient and underwent surgery without portal vein embolization. No immediate postoperative complication was observed, and both the patients were followed for more than one year.

Neuroendocrine tumours are a heterogeneous group of neoplasms arising from cells which release hormones in response to a neurologic signal.1 They most commonly originate in gastrointestinal (57%) or bronchopulmonary (27%) systems.2 Liver is usually involved in metastatic lesions3 and primary hepatic neuroendocrine tumours (PHNET) are extremely rare. The global occurrence is 1.5/100,000 people with about 150 reported cases reported in literature, including a few from Pakistan.1,4,5 The pathogenesis of PHNET is obscure but three theories are postulated. First theory suggests the transformation of liver stem cells, while the second suggests transformation of neuroendocrine cells in the epithelium of intrahepatic bile ducts. The last one describes the differentiation of ectopic pancreatic or adrenal tissue located in the liver.6

Due to rare occurrence of PHNET, it remains a challenge to diagnose and manage. Extensive investigation is needed to differentiate between primary versus metastatic lesion as liver is the most common site for metastatic NET and a rare site for primary. Various treatment modalities are described in literature, including chemotherapy, trans-arterial chemo-embolisation, surgery, liver transplantation and somatostatin,6 yet guidelines for choosing treatment options as well as their effectiveness and oncological outcomes are not available.

In this case report, we share our experience of two cases that were dealt with multimodality approach for the diagnosis and management of this rare liver tumour. Both the cases were treated at Shaukat Khanum Memorial Cancer Hospital and Research Centre, Lahore. Informed consent was obtained from both patients prior to writing of the case report.

Case 1: A 64-year-old man presented to the outpatient department in February 2017 with a two year history of pain in the right hypochondrium and associated weight and anorexia.

Triphasic abdominal CT scan was performed which revealed an 18 cm heterogenous lesion with central necrosis in the right lobe of the liver involving segments 4 to 8. The tumour showed central necrosis and patchy arterial enhancement with very mild washout on portal venous and delayed phase images. Biopsy of the lesion was performed and histopathology showed neuroendocrine tumour. Further investigations including upper and lower gastrointestinal endoscopy and octreotide scan did not reveal any other primary lesion in the body. 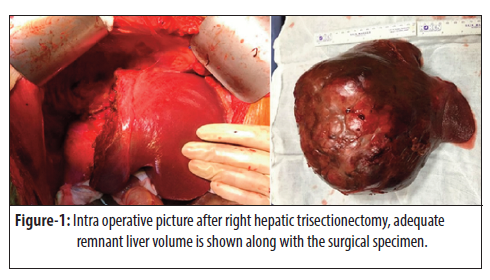 Operative findings showed a highly vascular tumour involving the whole of the right lobe. Postoperatively, the patient had an uneventful recovery and was discharged on sixth post-operative day.

No adjuvant chemotherapy was given. He is on regular follow up and has not developed any recurrent disease, after 19 months of surgery.

Case 2: A 50-year-old woman presented in August 2017 with complaints of epigastric abdominal pain for six months associated with vomiting and weight loss.

CT scan of the abdomen showed a large hepatic mass measuring 15 x 12 cm, in segments 5 to 8 of the liver. It demonstrated peripheral and central enhancement on arterial and delayed phases. Histopathology of biopsy specimen from the mass revealed a neuroendocrine tumour. Further workup (including upper and lower gastrointestinal endoscopies and octreotide scan) was carried out in an attempt to find the primary source but no other lesion in the body was found. Her future liver remnant on CT volumetry was adequate so surgery was planned. Right hepatic trisectionectomy was performed involving resection of the right liver lobe with segment four. Post operatively, the patient remained stable and was discharged on the fifth post-operative day.

Histopathology of the specimen showed 15 x 17.5 cm WHO grade-II neuroendocrine tumour with Ki67 proliferation index of 10%, as shown in Figure-2. 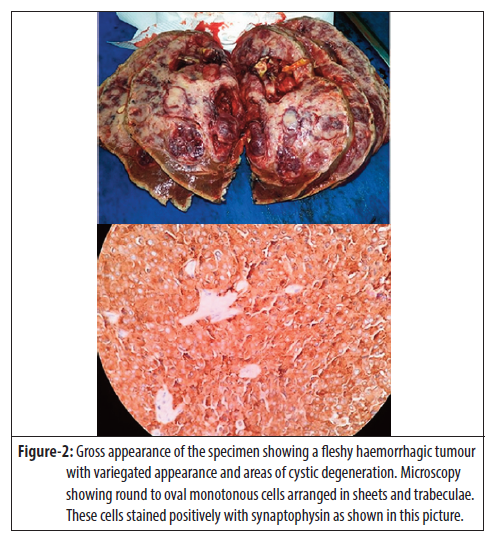 She received four cycles of adjuvant chemotherapy and has been on active surveillance since then. She is on regular follow up and is disease free for 15 months after surgery.

The diagnosis of PHNET is not straight forward as it is a rare entity. It involves pathological confirmation of neuroendocrine characteristics of the tumour4 as well as exclusion of extrahepatic primary sites of origin.6 It presents with nonspecific symptoms, with abdominal pain being the most common among them.7 Incidental finding of a liver lesion on imaging studies is the second most common presentation.2 A few patients may present with features of carcinoid syndrome, i.e. facial flushing, abdominal pain and diarrhoea.2 Thorough investigations are recommended to rule out primary from other sites. Investigations usually start with ultrasound and CT examination of the abdomen, which most often shows a mass in the liver.6 Biopsy is required to confirm the pathology.4 On CT imaging, PHNETs show arterial enhancements which is difficult to differentiate from hepatocellular carcinoma and delayed phase enhancement that resemble intrahepatic cholangiocarcinoma.3 PHNETs are divided into three grades based on mitotic rate and Ki67 index. Grade I is low, grade II is intermediate and grade III is a high grade tumour. Grade III neoplasms are also called neuroendocrine carcinomas.2 Upper and lower gastrointestinal endoscopy, octreotide scan or PET scan are performed to exclude primary tumour at extra hepatic sites.3,7,8 Octreotide scintigraphy is useful in detecting tumour recurrence as well; it has a sensitivity of 90% and specificity of 83 %.6,8

The presenting feature of our patients was abdominal pain which is consistent with what has been reported in previous literature.8-10 The right lobe is the most common site and this was again demonstrated in our patients.8

Surgical resection remains the best hope for cure provided the patient presents with resectable disease.7 Surgical excision increases survival from 29% to 78%.10 Several previous studies show that surgery is the only option for complete cure. Masataka et al reviewed 53 cases and found that the patients treated with surgery have a five-year recurrence rate of 18% and survival of 74%.11 In our study, both the patients underwent major liver resection of huge right lobe masses. One of the patient received a cycle of chemotherapy before surgery with the intent to reduce the size of the tumour. As chemotherapy was not successful in reducing the size of the tumour, it was decided to perform portal venous (PV) embolisation to increase the volume of future liver remnant before major hepatectomy. 3D volumetric assessment after successful portal venous embolisation showed an increase in the volume of left hepatic lobe (segment II and III) from 389 mL to 520 mL. In previous studies PV embolisation before surgical resection has not been described for the management of PHNET. However, in our patient PV embolisation made the surgical resection possible and the patient did well postoperatively without liver failure.

For inoperable cases, other methods of treatment, such as chemotherapy, trans-arterial chemo embolisation and radio frequency ablation have been described but their efficacy is not well known.5 The role of liver transplantation is not well-established but in a few cases patients were managed successfully with transplantation. In one such study, long-term survival of 10 years was achieved after live-donor liver transplantation in a patient with PHNET.8

Primary hepatic NETs are rare and challenging to diagnose. Extensive investigations are required to rule out primary tumour from other sites. In this study, to achieve tumour free margins and maintain adequate future liver remnant, thorough preoperative planning was done with radiology and oncology teams. Right hepatic trisectionectomy was performed in two patients to completely remove the tumour. Depending on grading and Ki67 proliferation index of the tumour, one patient was given adjuvant chemotherapy. Disease-free survival of one year after surgery was observed in both the patients.