Frequency and types of haemoglobinopathies in children with microcytic anaemia

Objective: To study the frequency and types of haemoglobinopathies in children with microcytic anaemia.

Method: The prospective study was conducted at the Paediatric Out-patient Department of Shifa Falahi Community Health Centre, Islamabad, Pakistan, from July to December, 2018, and comprised patients aged from 3 months to 14 years who had haemoglobin <10mg/dl and mean corpuscular volume <70fL. Serum ferritin and haemoglobin electrophoresis were done to check for iron deficiency anaemia and haemoglobinopathies. Data was analysed using SPSS 23.

Microcytic anaemia is the most common haematological abnormality presenting in the paediatric age group. Iron deficiency anaemia (IDA) and haemoglobinopathies (HbPs) are the two major differentials in this regard.1 Identification and differentiation between the two is equally important for the astute physician as the treatment and long-term implications of both disorders are different. Although IDA is reported more in Pakistan,2 identification of HbPs is very important to avoid potentially harmful and unnecessary treatment, like iron therapy, and identification of carriers for future genetic counselling and identification of pregnancies with thalassemia (Thalassemia) major.

HbPs are the most common genetic disorders of haemoglobin (Hb) synthesis, ranging from ineffective production or abnormal structure of the Hb molecule. The spectrum of these disorders varies from asymptomatic condition with mild to moderate microcytic anaemia to serious disorders like Thalassemia major that requires regular blood transfusions and multidisciplinary medical care.3

World Health Organisation (WHO) estimates that 7% of the world population is carrier for Hb disorders. Almost 80% of these affected children are born in the developing countries. About 50,000-100,000 patients with Thalassemia major die each year in these countries.4

Pakistan, being one of the struggling countries in the field of health, has a carrier rate estimated to be 5-8%, with 5,000 new patients diagnosed with Thalassemia major every year who are transfusion-dependent.5 A similar situation is faced in neighbouring countries, like India where carrier state for beta(β)-Thalassemia is 1-17% with an average of 3.2%.6,7

The current study was planned to determine the frequency and pattern of HbPs.

The prospective study was conducted at the Paediatric Out-patient Department (OPD) of Shifa Falahi Community Health Centre (SFCHC), Islamabad, Pakistan, from July to December, 2018. After approval from the institutional ethics review board, children aged from 3 months to 14 years with Hb <10mg/dl and MCV <70fL were included. Children with blood transfusion in the preceding 3 months were excluded.

Data was analysed using SPSS 23. Mean and standard deviation was calculated for age, height, weight, haematological parameters and Hb A, A2 D and F. Frequency and percentages were calculated for gender and HbPs. p<0.05 was considered significant. 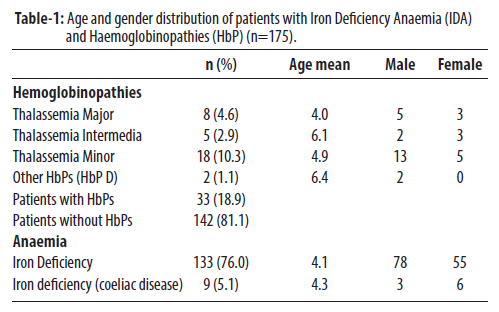 MCV was consistently low in both Thalassemia and IDA, while RDW was increased in IDA (Table 2).

The association between Mentzer index <13 and the cause of anaemia was non-significant (p=0.693).

The findings of the current study are consistent with previous reports.11 However, a study in Karachi reported the frequency of HbPs as high as 34.2%.12 Another study from Islamabad reported HbPs frequency 28.4%.13 A study on distribution pattern of HbPs in northern areas of Pakistan (25.69%) had Thalassemia or abnormal Hb.14 β-Thalassemia trait (BTT), or minor, was the most common Hb abnormality in the current study. A study done in the Kashmir region showed 5.6% carrier rate.15 MCV and MCH were consistently low in both Thalassemia types as well as in IDA, while RDW was increased and RBC count was normal in IDA. These results are consistent with literature.

Mentzer index <13 was not significantly associated in diagnosing Thalassemia in the current study, and the index was not found to be highly sensitive or specific in differentiating earlier as well.16

Unfortunately, no data registry is available for Thalassemia patients in Pakistan. WHO estimates that 5% of the world population is Thalassemia carrier.4 The current study also shows a heavy burden and significant number of asymptomatic carriers. Identification and screening of various HbPs is important in children to avoid unnecessary iron therapy and for future genetic counselling and identification of carrier status of parents and other siblings to prevent the transmission of more serious disorders, like Thalassemia major, in newborns and to decrease the overall burden of disease.17 HbPs are the most common genetic disorder of Hb synthesis in Pakistan.18 These hereditary disorders are major public health concerns. Pakistan is categorised as a middle income country by WHO. However, the average per year expense of management of a Thalassemia patient is US$4,400 per child which is 10 times more than the annual per capita income.19 This places a huge burden on the patients, their families and even communities.20 HbPs can be prevented by creating social awareness, screening and genetic counselling.