Objective: To determine the awareness of postgraduate residents and nurses working in a tertiary care hospital about hand hygiene.

Method: The cross-sectional study was conducted in October 2018 at The Children’s Hospital and the Institute of Child Health, Lahore, Pakistan, and comprised postgraduate residents and nurses. Data was collected using a 31-item self-administered inventory. Data analysis was done using SPSS 21.

Healthcare-associated infections (HCAIs) are increasingly recognised and drawing attention of health-related regulatory bodies. HCAIs have significant associated morbidity and mortality resulting in increasing cost of treatment, and there is growing evidence that most of these are preventable.1-3 To prevent microbial pathogen cross-transmission and nosocomial infections, hand hygiene (HH) is the most effective measure either by hand-washing practice or use of hand disinfectant.4,5

Despite increasing emphasis on hand-washing practices to prevent HCAIs and even the health professionals’ having adequate theoretical knowledge about HH, there is poor adherence to HH practice in situations where it needs to be performed.6-8 The important hindering factors with regards to HH are little provision of hand-washing sinks in the wards, lack of automatic taps and hand dryers / paper towels, dry skin and irritation due to frequent use of hand sanitiser / disinfectants and gloves.9

Continuous efforts are being made towards effective strategies for addressing this problem of HCAIs. The introduction of an evidence-based concept of “My Save moments for hand hygiene” by the World Health Organisation (WHO) is one of the most important efforts in this regard.10 This concept is aimed at improving the understanding, training, and monitoring of HH practices among healthcare professionals.10 In order to improve HH practices, the education of healthcare workers is an integral part of relevant strategies. It is a documented fact that by educating healthcare providers, a positive impact is generated on improving HH practices and reducing HCAIs.11 An educational, training and performance feedback programme on HH found that HH compliance improved progressively, leading to decreased overall nosocomial infection rate of HCAIs in an intensive care unit (ICU).12

Healthcare providers have an important role for patient safety. Healthcare workers can acquire bacteria on their hands by touching contaminated surfaces in a patient’s surrounding environment. A simple solution to prevent the spread of infection is hand-washing before and after patient contact. Healthcare workers have many opportunities for HH, but it is generally difficult to reach a compliance level where a change can be made to reduce infection rates.4,6,9 The current study was planned to analyse the perception of HH, knowledge of WHO hand-washing guidelines13 and practice of HH among post-graduate residents (PGRs) and nursing staff.

The cross-sectional study was conducted in October 2018 at The Children’s Hospital and the Institute of Child Health (ICH), Lahore, Pakistan. After approval from the institutional review board, the sample size was calculated using Open-Epi online calculator14 with 95% confidence level and 5% margin of error on the basis of a total of 250 PGRs and 450 nurses working in ICH.

After taking informed verbal consent from all the participants, demographic information, like gender, profession, year of residency and nursing experience in years, was obtained anonymously. Subsequently, a self-administered pre-tested and pre-validated 31-item questionnaire was distributed among the PGRs and nursing staff, and was collected when completed. It had 17 question on knowledge, 5 on attitude, and 9 on practice. The questions were answered in terms of either “Yes” or “No”. Correct answer was given 1 score. A total of 12 questions were considered correct if they were answered “No”. The total marks of HH questionnaire ranged from 0 to 31. Percentages for all question statements were calculated. Good awareness was represented by higher score. The values for good, moderate and poor awareness were used based on literature.4,15 A score of >75% points was considered good awareness, 50-74% points as moderate awareness, while score <50% points showed poor awareness towards HH. 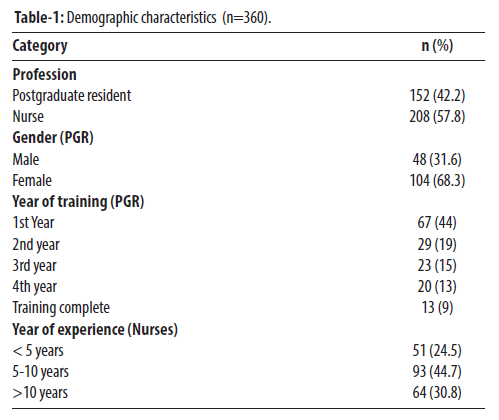 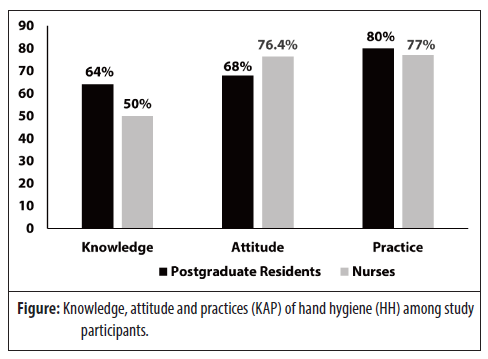 No significant differences were found based on the gender of PGRs (p>0.05). In knowledge domain, there was a misconception on the importance and use of antiseptic soap (Table 2).

Attitude and practice regarding HH of the two groups were also compared (Table 3).

Hands of the hospital staff play a major role in the transmission of nosocomial infection and HH is considered to be the most effective means of preventing infection both in the developing and the developed countries.1-3 In a study from Ireland, the response rate was quite low (37%)  compared to the response rate of the current study.16 The HH compliance was highest in (99.5%) nurses and (91%) PGRs after body fluid exposure, but it was the lowest after touching a patient's surroundings (61.5%) and (57.5%) in the two groups respectively. In contrast, alcohol-based hand-rub for hand sanitisation was routinely practised more by medical students compared to the nurses.16 In our study, majority of study participants had the clear knowledge of performing HH as the question “Enforce hand hygiene before and after physically examining the patient” was correctly answered by 83%, but 57.5% said that “Implement hand hygiene only after contact with secretions/bodily fluids”, and 69% agreed that “On unsoiled hands, an alcohol-based hand-rub is recommended over an anti-septic soap hand-washing”.

There was certain misconception about the importance and use of antibacterial soap in HH as 257(71.4%) agreed with the question, “Must use anti-septic soap for proper hand washing”. Our results are comparable with the a study in which 77% said antiseptic soap is essential for hand sanitisation.17 A recent study about the effectiveness of antiseptic soap showed that these soaps do not have any additional benefit and are not more potent and efficacious than plain soap at reducing microbial contamination.18

In our study, 64% PGRs and 50% nurses had good knowledge, while 80% PGRs and 77% nurses had good practice of HH. Two studies on hand-washing among healthcare providers  showed that 66% and 85% respectively had good knowledge. In both studies nurses had significantly better knowledge, compliance and self-reported practices regarding HH compared to young doctors, but HH practices were low compared to knowledge.3,19 Another study from Sri Lanka showed that 77% participants were knowledgeable, but <50% in the study practised good HH.15 Contrary to these studies, our practice results were better, but we did not find any difference between PGRs and nurses. Similar results were seen in a study from Nigeria in which majority respondents had good knowledge about HH and they considered it a most common vehicle of transmission of infection, but only one-third of all physicians practised the six steps of the hand-washing technique and large proportion of hand-washing technique defaulters were resident doctors.20

An observational study on medical students who took part in the annual patient safety training course reported that while entering an ICU, 150 medical students failed to perform HH, demonstrating that compliance was low even when medical students received intensive education on HH. There was male preponderance over female.21 A similar study showed no significant difference between the genders.20 In our study, based on the gender of PGRs, no significant difference was found (p³0.05) which is in line with literature.22

HH practices are different in different institutions. In a Canadian Patient Safety Culture Survey, the researcher gathered HH observations from three different healthcare centres and it was reported that the rates of HH practices varied widely, ranging from 35% to 77%.23 In our study, the practices were 80% among PGRs and 77% among nurses. The factors considered to be responsible for barrier towards HH practice and adherence were "lack of hand-washing facility; soap, sinks, water availability and disposable towel" narrated in study showing overall compliance with HH practices to be 38.8%.9

In terms of limitations, the current study was conducted at a single centre and the results, as such, are not generalisable. More studies from other tertiary care hospitals the country, including those based on observations rather than self-reporting, would draw a clear picture of the prevailing situation.

2.      Joshi S, Diwan V, Joshi R, Sharma M, Pathak A, Shah H, et al. “How Can the Patients Remain Safe, If We Are Not Safe and Protected from the Infections”? A Qualitative Exploration among Health-Care Workers about Challenges of Maintaining Hospital Cleanliness in a Resource Limited Tertiary Setting in Rural India. Int J Environ Res Public Health. 2018;15:1-14.