Objective: Sedation for upper gastrointestinal endoscopy (UGIE) in patients with cirrhosis is theoretically associated with high incidence of adverse events due to low levels of binding proteins and decreased hepatic clearance of drugs. The objective of the study was to assess the safety of combined propofol and midazolam sedation in cirrhotic patients undergoing UGIE.

Methods: A total of 500 patients undergoing UGIE were divided in to two groups in a prospective observational study from Jan 1st 2018 to June 30th 2018. Group (I) consisted of cirrhotic patients who underwent the procedure with sedation and Group (II) consisted of non-cirrhotic patients who opted for sedation. The main outcome measurements included vitals monitoring before, during and after procedure, total sedation dose, time to initial and deep sedation, recovery time and complications.

Conclusion: Balanced propofol and midazolam sedation has a good index of safety for both cirrhotic and non-cirrhotic patients and is acceptable by the patients and endoscopists equally.

Cirrhotic patients undergo upper gastrointestinal endoscopy (UGIE) repeatedly, both in elective and emergency setups. To increase patient’s tolerability and acceptance, endoscopic procedures are done under conscious sedation but hepatic impairment and risk of hepatic encephalopathy increase apprehension among health care providers regarding use of sedation in cirrhotic patients.1

Midazolam, propofol, fentanyl and meperidine, alone or in combination are used commonly for UGIE. Midazolam has a rapid onset and potent amnestic properties, however due to low hepatic clearance in cirrhotic patients; large doses of midazolam are associated with psychomotor dysfunction.2 Propofol, a hypnotic agent, is used alone or in conjunction with midazolam in patients with impaired hepatic or renal function as it does not require dose adjustment and is associated with more serious cardiovascular and respiratory complications as there is no antagonist available.3

A total of 500 patients were enrolled through convenience sampling with a 4.4% margin of error and a population proportion of 80% for a confidence level of 95% using OpenEpi sample size calculator.7 The study was carried out over a period of six months from January 1st 2018 to June 30th 2018 with ages of patients between 16 – 79 years in a prospective observational study. Two groups were drawn according to patients’ consent regarding sedation including I) patients with cirrhosis undergoing upper gastrointestinal endoscopy with sedation and II) patients without cirrhosis undergoing upper gastrointestinal endoscopy with sedation.  Patients with Hepatocellular Carcinoma, Portal Vein Thrombosis without cirrhosis, non-cirrhotic portal hypertension, patients with prior Trans-hepatic Intravenous Porto-systemic Shunt (TIPSS), pregnant and lactating mothers, patients with ages below 14 and above 79, patients with hepatic encephalopathy, chronic pulmonary disease, chronic kidney disease, hypotension, patients in shock, history of drug abuse and those with American Society of Anaesthesiologist Classification of 4 or more were all excluded. Patients were also excluded if the procedure was abandoned or there was difficult intubation. The control group consisted of patients undergoing upper GI endoscopy to evaluate dyspepsia, Gastro-esophageal Reflux Disease (GERD) and upper GI bleed, who had no evidence of liver disease on clinical history or laboratory findings. An approval from the Institutional Review Board was duly taken for the study.

All the patients fasted over-night. Sedation was given either by a gastroenterologist or a nurse endoscopist who had training in basic life support (BLS) and advanced cardiac life support (ACLS). The non-anaesthesiologist trainee gastroenterologist monitored heart rate, blood pressure, oxygen saturation, chest movements, breathing pattern, signs of aspiration, depth of sedation and level of pain. Complete cardiopulmonary resuscitation equipment was available within the endoscopy unit. On call anaesthetic and intensive care staff were informed beforehand and the availability of space in the intensive care unit along with a ventilator was ensured. Procedures were performed in the left lateral position. An 18–20 gauge cannula in the right forearm was used to establish intravenous access for sedation.

Intravenous Propofol in dose of 30mg and Midazolam 3mg were given as initial sedation in patients with weight above 60kg and age below 70 years. Repeated boluses of 10mg Propofol were given until patient achieved adequate sedation. For patients with either weight below 60kg or age above 70 years, initial bolus of 20mg Propofol and 2mg of Midazolam was given intravenously.8

A score of 2 on the modified Observer’s Assessment of Alertness/Sedation (OAA/S) scale was considered as deep sedation (i.e, patient responding to mild probing or shaking).9 The time to achieve deep sedation after initial sedation was recorded for each patient. OAA/S of 2 was maintained throughout the procedure, and total dose of sedation with total duration of procedure were recorded.

Recovery from sedation was assessed using modified Aldrete scoring system (MASS) every 5 minutes post-procedure till 30 minutes.8 MASS scores of 9 and above indicated that the patient can be discharged safely8 and thus patients with a score of >9 at 30 minutes were allowed to leave the facility with a responsible attendant.6 In case attendant was not available, the patients were admitted for observation for 24 hours. Patients who did not opt for sedation were discharged within 15 minutes of procedure in case no complication occurred.

A total of 500 patients were enrolled through convenience sampling, out of which 50% had cirrhosis. Both the groups had a significant male predominance (Table 1). The mean age±SD in years for Group I was 54.8±11.8 and that for Group II was 45.7±21.8. Group I had relatively higher weights as compared to Group II. Among the cirrhotic patients, Child Pugh Score B (7-9) was predominant as depicted in the Table 1.

Emergency procedures accounted to 18.4% and 3.2% for Group I and II, respectively. The duration of procedure was longer for Group I (14.8±0.1 min) as compared to Group II (8.1±3.7) largely because of therapeutic procedures like endoscopic band ligation (EBL) and sclerotherapy in cirrhotic population. Baseline systolic, diastolic blood pressure and pulse were lower for the Group I in comparison to Group II, probably because of primary or secondary prophylaxis provided for portal hypertension in cirrhotic population. (Table 1). 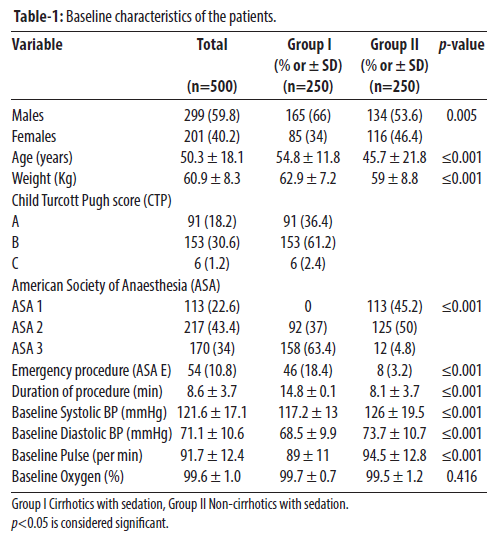 The time interval to initial and deep sedation (OAA) was longer for Group II as compared to Group I, whereas the doses of sedation used were higher for Group I, corresponding to the longer duration of procedure (Table 2). 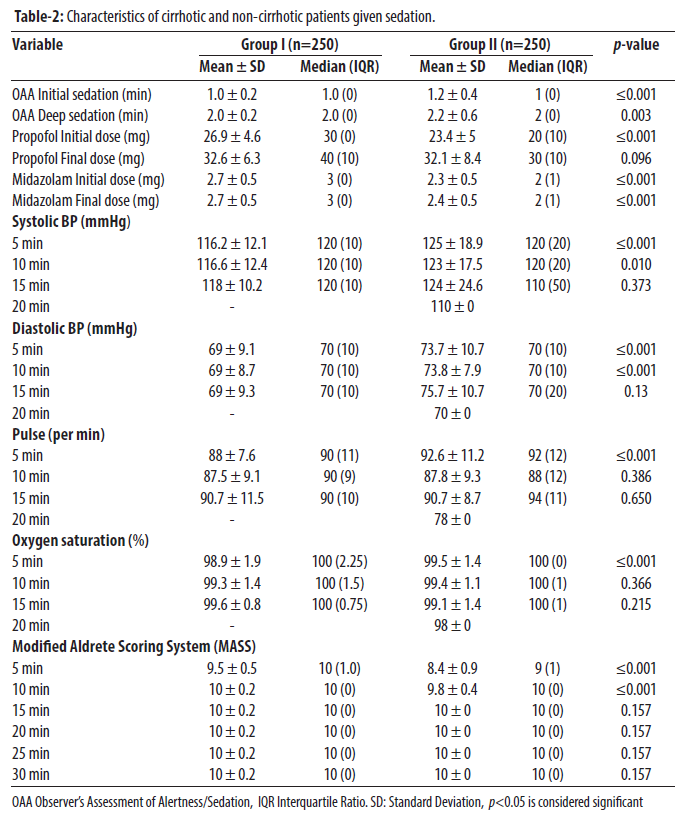 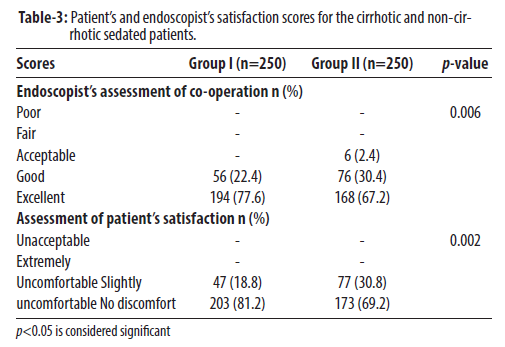 An equal number of patients from both the groups showed equal incidence of minor bradycardia (1.2% each) and hypoxaemia (0.8% each) as post or intra-operative complications, with cirrhotic patients showing a 0.8% incidence of Grade II hepatic encephalopathy.

Sedation in endoscopic procedures is a preferred method due to patient’s tolerability and endoscopist’s comfort. The drugs currently available for conscious sedation during endoscopy were thought to impair psychomotor and cardiovascular responses in cirrhotic patients leading to hepatic encephalopathy, bradycardia, hypotension, hypoxaemia and aspiration.12 Propofol is primarily metabolized in the liver and it has been seen that there is no exaggerated pharmacological response seen in cirrhotic patients due to their poor hepatic clearance and low protein binding capacity14,15 making propofol a safer option with no dose adjustment in case of cirrhotic patients.14 Midazolam, however, has been observed to have a two-fold to three-fold longer clearance rate in case of cirrhosis15 and thus lower doses have been advocated.

The study showed a relatively younger population representation for non-cirrhosis group as dyspepsia and GERD are the most common indications for upper GI endoscopy in younger age group as compared to cirrhosis.16,17 Also patients with cirrhosis showed a relatively higher weight that could be explained by accumulation of ascites and peripheral oedema secondary to hepatic, cardiovascular, pulmonary and renal complications common to portal hypertension in cirrhotics, thus causing larger volume of distribution and a slow drug clearance in theory.18

Our study showed that Aldrete score was lower for non-cirrhotic group with sedation for the first 10 minutes only followed by a rapid recovery, which was in accordance to a similar study.12 The rate of minor hypoxaemia and bradycardia was similar for cirrhotic and non-cirrhotic sedated groups, which was in accordance to another study.19 None of the patients from both groups experienced aspiration as compared to a similar study, which showed a relatively modest rate of aspiration for both the groups,19 probably related to the experience of endoscopists.20 Many studies using propofol or fentanyl alone showed no increase in the incidence of hepatic encephalopathy21-24 whereas, 0.8% of cirrhotic patients experienced a short lived Grade II hepatic encephalopathy that required hospital admission for 24 hours in our study.

The dose required for induction and maintenance of anaesthesia was lower for our patients using propofol and midazolam as compared to studies using either drug  alone4,5 which is because of the synergistic sedative effect of propofol and midazolam when used together.5 Synergistic sedation with low doses of both midazolam and propofol explains the low rate of complications in our study, as lower doses of sedation were used, eliminating the likelihood of adverse effects secondary to larger doses of sedation.6

Majority of the sedated patients had a pleasant experience and evaluated their experience more positively with willingness to undergo another endoscopic procedure if required. Similarly, endoscopists were also comfortable with sedated groups that helped them to focus on the procedures rather than worry about patient’s intolerability and possible complications like aspiration of vomitus. These findings were in accordance to a similar study.19

Blood levels of propofol and midazolam, effect of volume of distribution and clearance as well as possible effects of sedatives on liver function and biochemical tests were not included in the study, which would have theoretically made the study strong. Also groups were matched on the basis of age only (16 – 79 years), gender and weight were not matched which might have contributed to bias.