Relationship of BMI with Junk Food, sleep pattern, exam performance and awareness about its ill health effects in healthy teenagers

Objective: To evaluate the relationship of body mass index of healthy teenagers with junk food, sleep pattern, exam performance and awareness about its ill effects.

Methods: The cross-sectional study was conducted from March to June 2017 at University Medical and Dental College, University of Faisalabad, Faisalabad, Pakistan, and comprised subjects aged 13-19. Data was collected using face-to-face interviews, getting the examnation results from respective educational insititutions and calculating the body mass index, Data was analysed using SPSS 22.

Healthy diet is essential in combating non-communicable diseases, like diabetes mellitus (DM) and obesity.1 Junk food, also known as fast food, has become increasingly popular in Pakistan. Many factors have led to an increase in junk food consumption; one of the important factors is its easy availability to students in school and college cafeterias. It has also been seen that the junk food restaurants have grown rapidly across Pakistan which provide door-to-door delivery of junk food.2 The increasing trend of consuming junk food has been witnessed all over the world due to easy availability and accessibility of a variety of delicious fast food items at very affordable prices.3 However, the fact should not be ignored that junk food has a high caloric value which results in serious health problems when consumed excessively, leading to obesity, dental cavities and DM which are few of the diseases whose prevalence is increasing and it can affect the exam performance as well of the students.4

A disturbed sleep pattern has been associated with obesity as it results in increased appetite and craving for salty, sweet and fried food, which, when consumed excessively, has a detrimental effect on the health of teenagers.5 Studies have shown that a decreased intake of fruits and vegetables along with an increased intake of fast food results in sleep disturbance which has an  overall impact on daily routine of the individuals.6

The cross-sectional study was conducted from March to June 2017 at University Medical and Dental College, University of Faisalabad, Faisalabad, Pakistan, and comprised teenaged students. After approval from the institutional ethics review committee, the sample size was calculated using the formula n = NX/ (X+N-1), where X= (Zα/2) ^2 [p (1-p)] /e^2. In the formula, n = sample size, Zα/2 = critical value of normal distribution at α/2, α is 0.05 and critical value is 1.96, while p is the sample proportion and N is the population size). The prevalence of junk food consumption was taken as 11%,9 errors (e) of 5% and confidence interval (CI) of 95%.

The sample was raised using multistage sampling technique. A list of all private schools in Faisalabad providing secondary education to the students was collected. From the list five schools were selected randomly, and from these five ,schools lists of all students enrolled were obtained from their respective managements. Those included were healthy subjects aged 13-19 who were willing to volunteer for the study. Students with any known disease, such as inflammatory bowel disease, cystic fibrosis, coeliac disease, and known food allergy or food intolerance, were excluded, and so were those having any psychiatric eating disorder.

After taking written informed consent from the participants or their guardians, data was collected through face-to-face interviews regarding demographics, dietary and sleeping habits using a specially designed proforma.10 Test scores of the students were obtained from the respective educational insititutions. BMI was calculated after taking height and weight measurements using standardised equipment and standard procedure. The subjects were divided into various BMI groups using the the Asian classification of the World Health Organization (WHO),11 labelled as: underweight <18.5, normal 18.5-22.9, overweight 23-24.9, pre-obese 25-29.9, and obese >30.

Data was analysed using SPSS 22. For qualitative variables, data was presented as frequencies and percentages. For quantitative variables, it was presented as mean±standard deviation (SD). Independent sample t test and chi-square tests was used for inter-group comparisons. Analysis of variance (ANOVA) followed by post-hoc analysis was done for multiple comparisons among BMI groups. Pearson’s correlation was applied to observe correlation between quantitative variables. Multivariate linear stepwise regression analysis was used to see the predictors of BMI. P≤0.05 was considered statistically significant. 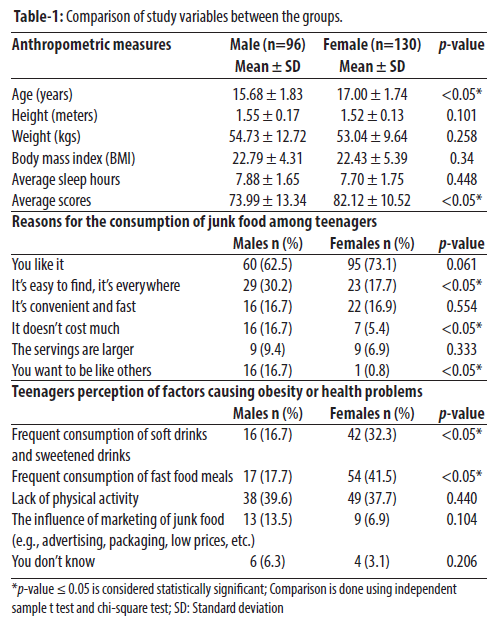 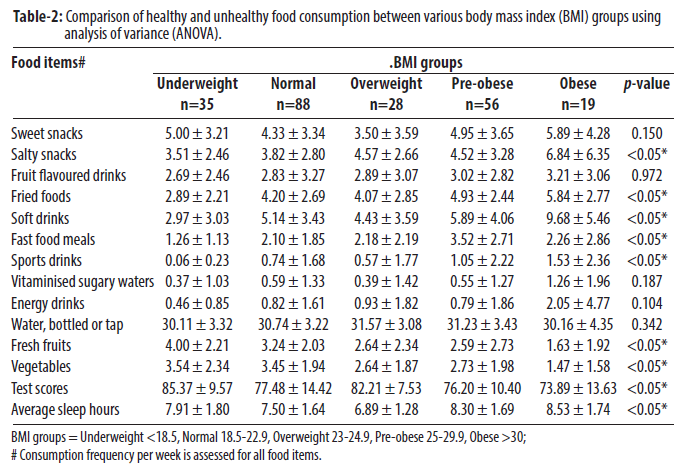 The relation of BMI with unhealthy and healthy food consumption, average sleep hours and test scores in college students were explored (Table 3). 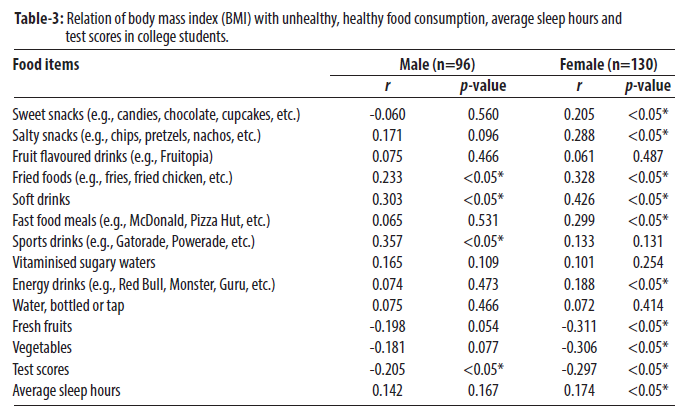 Despite having a significant perception about the ill effects of obesity and related factors, most teenagers regardless of gender were happy with their dietary habits and had no intention to change it for the better (Figure). 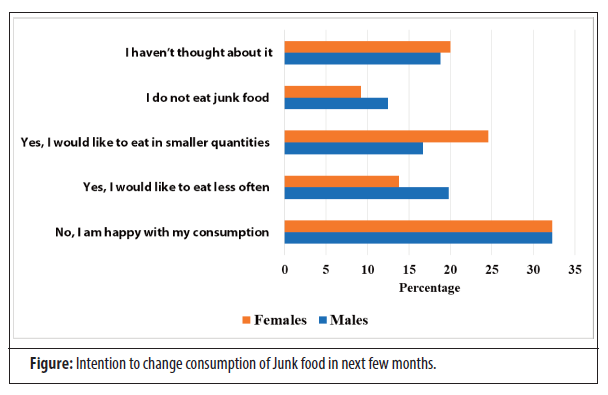 The study found that the main reason for eating junk food was that the young population liked it and it was easily available. Also, though female students were more aware compared to male counterparts of the ill effects of fast food, like obesity, they were happy consuming such food. Several studies have shown similar liking of teenagers towards fast food.12-14 Our study also found that consumption of salty snacks, fried food and fast food was significantly higher in the obese group. One of the reasons could be that these snacks are easily available at the school canteen and students are left with no other choice. A study in Brazil also found that food environment in school is one of the major causes of consumption of unhealthy food among teenagers.15 Soft, sports and energy drinks were significantly consumed in obese groups compared to the others. Teenagers liked energy drinks because it enhanced their physical performance, cognition and concentration level during their studies.16 A study reported that these energy drinks improved myocardial contractility within one hour of consumption.17 However, the adverse effects weigh far more than the therapeutic effects of the energy drinks. It was found in a study that students who are on sports drinks have more tendencies towards eating fried and high-sugar foods than those who did not.18

Another study found that increased consumption of energy drinks is significantly associated with high BMI.19 In a study in Mexican females, researchers tried to find food associated with obesity, and it was observed that obese females were taking more soft drinks and fat compared to overweight and normal-weight females.20 Another study showed a significant association between intakes of soft drinks and type 2 DM.21 Another study saw that although students knew that sports drinks could cause dental caries and other health-related issues, they liked them because of their taste and were unable to avoid them.22 Researchers suggested that the reduction in the use of energy drinks and sports drinks is associated with a decreased risk of obesity and type 2 DM.23

The current study also observed that students having a higher BMI performed poorly in exams. This result is similar to a study in which obese Japanese adolescents had low grades in their exams.29 In another cross-sectional study conducted on 893 school-children showed that good fitness level was associated with higher academic performance in males compared to obese boys who showed significantly lower academic performance. This is due to the fact that higher fitness is related to improved cardio-respiratory and improved cognitive function.30 Another study explained that obesity is one of the most important risk factors of obstructive sleep apnoea which leads to daytime sedation, fatigue, depression and overall poor academic performance.31 Obese students are also likely to miss school more frequently, especially those with chronic health conditions, such as DM, which also leads to poor academic performance and low grades in exams. Unhealthy lifestyle is one of the major factors in gaining weight, and exercise and dietary modification is necessary among students to manage the issue.32,33

The current study found that individuals with more average sleep hours were obese. A study also found that an increase in sleep duration was significantly associated with obesity.32 However, there are studies showing an inverse relationship between sleep hours and obesity.34,35

It was also observed in the current study that although teenagers were well aware of the ill effects of junk food, they were happy with their dietary habits and were not willing to change it. This is a matter of great concern for the policy makers, as obesity prevalence is increasing in Pakistan36 and junk food consumption is one of the major contributing factors.

Consumption of junk food in teenagers was found to be increasing their BMI, affecting their exam performance and sleep duration. Students were also aware about the ill health effects of junk food, but were unwilling to decrease its consumption.

Disclaimer: The Abstract has been submitted to an AMEE 2019 international conference scheduled to be held in Vienna, Austria,  August 24-28, and will be published in the event’s Abstract Book, if accepted.

1.      Hilger J, Loerbroks A, Diehl K. Eating behaviour of university students in Germany: Dietary intake, barriers to healthy eating and changes in eating behaviour since the time of matriculation. Appetite. 2017; 109:100-7.