Objective: The main objective of the study was to evaluate the health of University of Karachi students (aged 19 to 21) by observing the correlation of haemoglobin level with underweight BMI.

Methods: In this study 151 students were enrolled from the Department of Biotechnology, University of Karachi, Sindh Pakistan. Blood samples were collected and Haemoglobin estimation was performed by Sahli’s Haemoglobinometer. BMI of each student was calculated as per WHO criteria for South Asian.

Conclusion: This study concluded that anaemia with underweight BMI is more prevalent among females especially adolescent girls. This could be as they followed poor dietary habits and had some infections. This data evaluated the health status of University students on a small scale.

Pakistan is ranked sixth in the list of most populous country in the world, with about 201 million people. High population, lack of primary necessities, unfavourable climatic conditions and lack of educational and economic development placing Pakistani citizens in a challenging environment.1

Youth of Pakistan, which makes up about 70% of total population are facing different health problems (apart from different infectious diseases) including diabetes, obesity, high and low blood pressure, tachycardia, bradycardia, anemia, leukemia, lack of apatite etc.2 Anaemia (Low hemoglobin level) is a basic problem around the world with developing countries facing its high prevalence. It frequently occurs due to insufficient supply of iron, excessive blood loss or disease, malabsorption or a combination of all these factors. Iron deficiency can also occur due to poor bioavailability of dietary iron or because of excessive losses of iron from the body. Most commonly reported symptoms in people suffering from anaemia are weakness, fatigue, general malaise, and sometimes poor concentration.3 In developing countries, its prevalence is higher in girls mainly aged from 18 to 25 years.4

Present study was designed to determine the haemoglobin level against BMI (body mass index) to evaluate the health status of the university students. BMI (also known as Quetelet Index) is an important tool to evaluate the health status. BMI is calculated as the weight in kilograms divided by the square of the height in meters (kg/m²). A BMI with less than 18.5 kg/m² categorized as underweight and value more than 22.9 kg/m² is placed in overweight category. Values between these are considered as normal. These days body mass index (BMI) has become the choice for many researchers and health professionals, to measure health status of certain age group.5

In Pakistan, very few studies have been carried out to determine the correlation of anaemia with BMI (body mass index). Therefore, in the present study an attempt has been made to report the prevalence of anaemia among university students of Karachi, Sindh and to draw its correlation with their body mass index.

A cross sectional study was conducted from 07th December 2018 to 15th February 2019 among the students of Department of Biotechnology, University of Karachi, Sindh, Pakistan between the age group of 19 to 21 years.

Procedure of study was explained to the students and written consent was also taken. A structured proforma was used to collect and record information on age, gender, dietary pattern, height in meters and weight in kilograms.

The results were interpreted according to the WHO criteria. Anaemic condition was recoded if the haemoglobin is below the cut off value as recommended by WHO that is for adult males-13.0 gm/dl and for adult nonpregnant females-12.0 gm/dl.8,9

WHO Criteria for detection of various grades of Anaemia

Anthropometric measurements, including height measured without shoes against a wall-fixed tape and weight measured without shoes on a platform scale with light clothing; a 1.0 kg subtraction to correct for weight of the clothing, were taken. The body mass index (BMI) was calculated as weight/ height² (kg/m²). BMI measuring criteria for Asian population are: less than 18.5 kg/m² categorize as underweight, 18.5-22.9 kg/m² as healthy, 23-27.4 kg/m² as overweight and 27.5 kg/m² as obese.10,11

It was observed that out of 151 students, 60 (40%) students showed anaemia in which mild grade 1 anaemia observed in 41 (27.1%) students whereas 19 (12.6%) students showed grade 2 moderate anaemia with alarming Hb values. Mean Hb level was 12.39 gm/dl and gender wise grading of Anaemia among University students (as per WHO Criteria) are shown in table 1.

Gender wise distribution of BMI is shown in Table 2.

After gathering all the data, it was noticed that Anaemia was more prevalent in underweight students whereas lesser prevalence was observed in overweight students, as shown in Table 3.

Statistics showed that over all 50 students were underweight, out of which 34 students were suffering from anaemia of grade 1 and grade 2, as shown in figure. 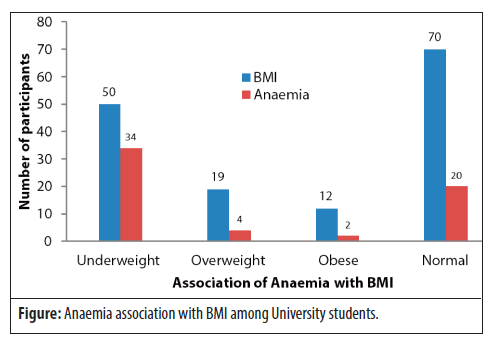 The dietary questionnaire of students was also taken, which revealed that out of 118 girls that we enrolled in the study only 30 (25.4%) girls consumed proper diet, while 88 (74.5%) girls had poor dietary habits. They did not take breakfast at home and depended on snacks offered in the university canteen, which consisted mostly of biscuits, chocolate bars, potato chips and carbonated cola drinks. Out of these 88 girls, 50 (56.8%) girls showed anaemic health condition and 40 (45.4%) girls were with BMI less than 18.5 kg/m². Similarly, 3 boys also showed mild anaemic condition (grade 1 anaemia) because of improper diet. No association between education of mother and father or any financial issues were detected.

Anaemia among young population is of more concern in developing countries like Pakistan, Iran, India and Afghanistan as compared to developed countries. In Asian countries, not only rural areas but urban areas are also being under its high prevalence. In Pakistan, very few studies are available to evaluate the health status of adult students on BMI and haemoglobin parameters. A study carried out in Karachi indicated 52% students were underweight.13 Another study was conducted in Aga Khan university, which indicated 27.2% young females were in underweight category.13 One more important study by Hakeem in 2001 indicated that under developed areas where income was not enough, the rate of underweight was significantly higher.14

Dow University of Health Sciences conducted a study which found that 29.9% medical college students were underweight.15 Comparison to BMI with haemoglobin level, our neighboring country, India, Kamal Mehta carried out a study, which showed drastically high ratio of underweight females approximately 76.67% suffered from anaemia.16 Similarly, in Bangladesh, 63.5% girls were observed to be anaemic with poor diet and lower BMI.17 Another cross-sectional study was conducted in Yemen, where it was found that 30.4% students were anaemic, out of which more than 50% were females.18 Contradictory to these results, Akram Ghadiri-Anari from Iran mentioned that there is no correlation observed between BMI and haemoglobin level.19

In this current study, 60 (38%) students out of 151 were found anaemic. Out of these 60 anaemic students, 55 (91.6%) were females with grade 1 and grade 2 anaemic condition. Another important aspect of this study was BMI of students. One-third 50 (33%) students were underweight, out of which 34 (22.5%) students were anaemic as well. Anaemia with underweight category of BMI is more prevalent among girls due to poor diet and under nutrition as compared to males, which is consistent in this present study.20

Nutritional anaemia is one of the major health problems among students. Its prevalence increases in females especially adolescent girls due to menstrual blood loss, poor diet and under nutrition as compared to males. This health issue could be minimized if certain control measures be taken like students specially adolescent girls are prescribed iron supplements on daily basis, students should be motivated or instructed by their teachers or mothers to take proper diet rich with iron, vitamins and minerals etc, a proper diet plan should be given to them by the health physicians, parents should strictly advise their young ones to take regular breakfast before leaving for colleges or universities.

Conflict of interest: None to declare.

Funding disclosure: None to declare.

4.      Kurz KM, Welch JC. The nutrition and lives of adolescents in developing countries: Findings from the nutrition of adolescent girls research program. Washington: International Center for Research on Women ICRW, 1994.

10.    Who Expert Consultation. Appropriate body-mass index for Asian populations and its implications for policy and intervention strategies. Lancet. 2004; 363:157-63.