Objective: To assess knowledge and practices regarding hand-washing among mothers of children aged ≤5 years.

Conclusion: Health education and behaviour-changing communication approaches must be implemented to educate the masses about proper hand-washing technique.

According to the World Health Organisation (WHO), approximately 3.8 million children aged

The cross-sectional KAP study was conducted from March to July 2015 in the rural areas of Union Council Charwa of Tehsil Pasrur in District Sialkot, Pakistan. After obtaining approval from the ethics review board of Al-Shifa Trust Eye Hospital, Rawalpindi, Pakistan, and permission from the relevant area administration, the sample size was calculated using OpenEpisoftware6 with 95% confidence interval (CI), 50% prevalence of hand-washing practices and p= 0.05.The estimated population of Sialkot district7 was taken as 1698,009 as of 2014 while using the formula: 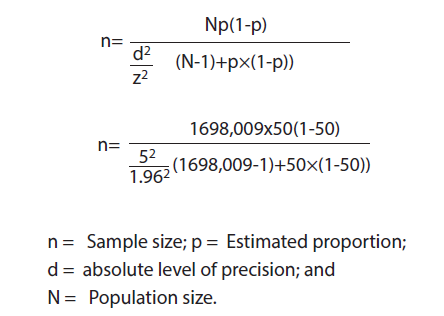 The sample was raised using multi-stage random sampling technique. Those included were mothers of children aged ≤5 years. Those with any severe physical or mental illness, or those who were incapable of participating in the study with speech and hearing impairment were excluded. In the first stage, four villages of Charwa Union Council were randomly selected. In the second stage, a list of households was collected from lady health workers (LHWs) in the area. In the next stage, households with mothers having children aged ≤5 were selected. The list of households had 694 units along with details of the family numbers living in each house. A family number was allotted to all the assigned households, and the mother in each household was invited to participate in the study. Those who furnished voluntary consent were included.

Data was collected using a structured questionnaire developed after extensive review of literature.5,8,9 Another questionnaire was adapted from the WHO guidelines on hand-washing technique, which was subsequently validated2 through a review of the tool by public health experts working for health education, hand hygiene and infection control. It was pilot-tested and minor modifications were made in the final questionnaire. Primarily, the questionnaire was in English language which was translated into Urdu for the purpose of interview only. Data was collected by the principal investigator along with the assigned LHW.

Apart from socio-demographic details, data was collected regarding mother’s knowledge and practice regarding hand-washing using soap and water, and whether or not they were following the appropriate hand-washing technique. Questionnaire was self-administered to the respondents and was coded. The filled questionnaires were checked on a daily basis before entering the data. For the purpose of coding, definitions for relevant terms were set. Sufficient knowledge was considered when mother’s hand-washing knowledge scores were above the median score, while scores below the median were considered insufficient knowledge. Mother’s hand-washing practice score above the median was labelled as ‘good practices’ and below-median scores as ‘bad practices’.

In the knowledge domain, 14 questions were asked. The correct response (Yes) was coded as 1, and incorrect response (No) as 0. For the practice domain, 12 questions were asked and were scored 3 = always, 2 = often, and 1 = sometimes, and 0 = never. The scale was then converted into binary outcome by coding good practices as ‘1’ and bad practices as ‘0’. Data was analysed using SPSS 17. Descriptive statistics were expressed as frequencies and percentages. Inferential statistics was performed where chi-square was used to determine the association between categorical variables. Logistic regression analysis was carried out to assess statistical significance of the difference between appropriate and inappropriate hand-washing practices. 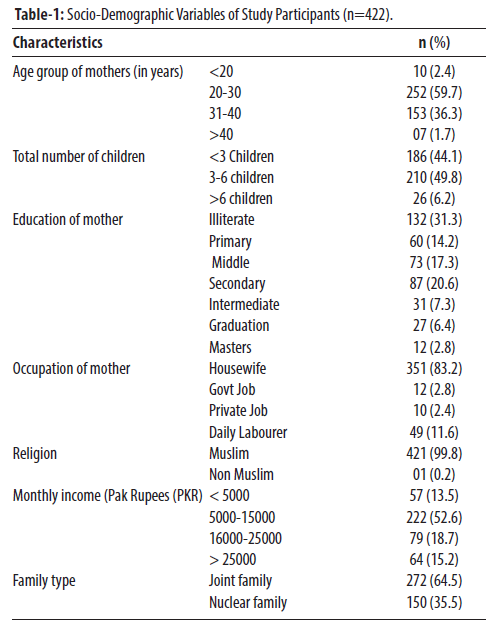 Overall, 319 (75.4%) of the mothers’ responses were correct about the importance of hand-washing 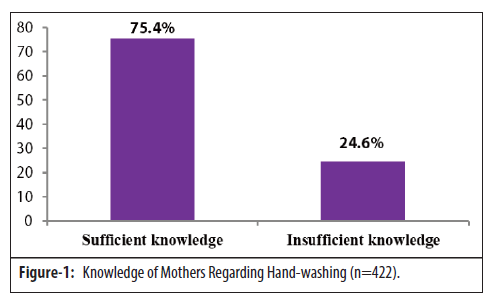 (Figure 1); 380 (99%) were aware of the benefits of hand-washing; 76(18.5%) considered washing hands with water only was sufficient; 409 (97%) believed that unwashed hands can cause illness among children; and 401(95%) considered that disease can be acquired by contacting domestic animals and pets thorough hands. Also, 300 (71%) of the mothers thought hand-washing was essential for the prevention of communicable diseases; 173 (41%) knew that diarrhoea can be prevented among children by hand-washing; 194 (46%) knew that it could prevent ARTIs; 97 (23%) knew it could prevent intestinal worms in their children; 87 (21%) knew it could prevent allergy; and 38 (9%) knew that skin and eye infections could be prevented. Further, 148 (35%) mothers stated that hands should be washed to be clean; 154 (36.5%) responded that hands should be washed to prevent diseases; 78 (18.5%) answered that hands should be washed for both purposes; and 40 (9.5%) did not know why to wash hands. 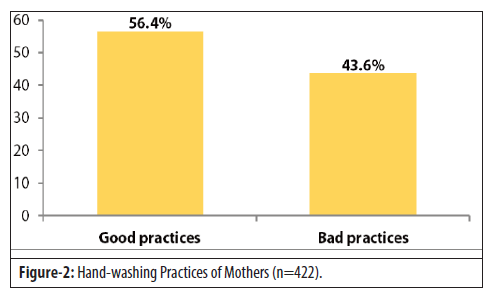 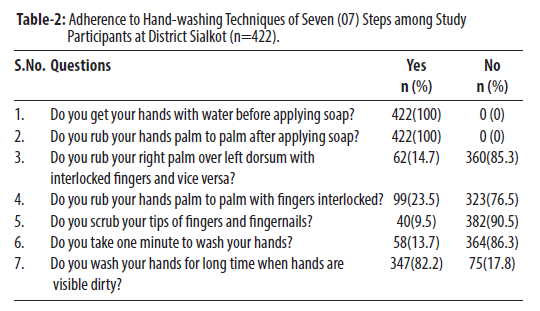 Overall, appropriate technique of hand-washing was found in 59(14%) mothers, and in 363 (86%) it was inappropriate. Also, 333 (79%) mothers were educating their children about hand-washing practices; and 418 (99%) were supportive of the idea of arranging a course of hand hygiene for school-going children. Education level, occupation of the mother, and monthly income were parameters significantly associated with sufficient knowledge regarding hand-washing (p≤0.05). The odds of having sufficient knowledge regarding hand-washing were six times among educated mothers compared to those with no formal education (Table 3). 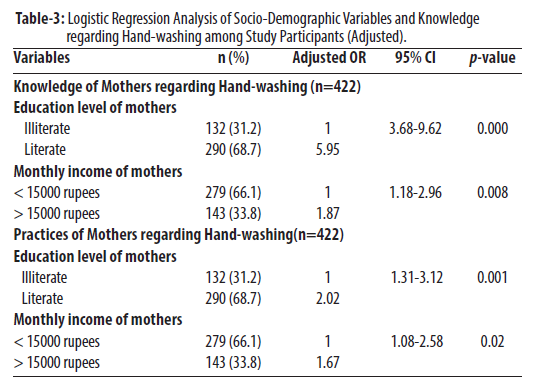 Hand-washing is a cost-effective and life-saving intervention within reach of communities and household members.10 In the current study, the respondents reported various sources of information, such as 52% acquired knowledge regarding hand-washing from family and friends, followed by 40% from their schooling, and 2% through media. Health personnel and LHWs were the chief source of knowledge regarding hand-washing for 3% of the subjects. A study conducted in India where 46% women stated that hands should be washed to maintain cleanliness followed by 37% of women who stated that hands should be washed to prevent diseases. Approximately 18% of the mothers responded that it was sufficient to wash hands with water alone in order to prevent diseases, which is a finding almost similar to earlier studies.11,12

Among the respondents, 97% considered that unwashed hands can cause illness among their children, while 95% considered that diseases can be acquired by hands through contact with domestic animals and pets. These findings are similar to those reported earlier.8 In the current study, 75% mothers had sufficient knowledge about hand-washing and 25% had insufficient knowledge, which is lower than the 93% and 7% reported in an earlier study.9 In the current study, 14% mothers said they take one minute to wash their hands with soap, and 39% mothers wiped or dried their hands using a shared towel. This is in contrast to the findings of a similar study where 80% respondents reported washing their hands with soap for one minute and 70% stated that they used shared towel.13,14 In addition, the current study also found that half of the mothers dried their hands with their ‘dupatta’ (scarf) after washing hands.  Interventions targeted on health education and improving hygiene regarding hand-washing can be a way forward in terms of prevention from infectious diseases among children. Moreover; schools and government-endorsed health education campaigns can effectively deliver the right message among mothers and their children.10,14,15 The limitation of the current study is that it was conducted in only four small villages of one rural union council and hence, the findings cannot be generalised to entire district. Future studies are recommended to be conducted at the district level to assess the cost-effectiveness of health education focussing on hand-washing.

Education level, occupation of the mother, and household monthly income were found to be significantly associated with sufficient knowledge regarding hand-washing.

The study was conducted in 2015. Due to unforeseen circumstances, it will be published in 2021.

Conflict of interest: The person who signed the ethical review statement is also a co-author.