Objective: To determine the effectiveness of Mulligan mobilisation versus Cyriax approach in the management of patients with subacute lateral epicondylitis.

Methods: The clinical trial was conducted at the District Headquarter Hospital, Bahawalnagar, Pakistan, from September to December 2018, and comprised lateral epicondylitis patients having symptoms for >2 weeks. The diagnosis was confirmed on the basis of physical tests and musculoskeletal ultrasound. The subjects were randomly allocated to two equal groups A and B. Group A received deep transverse friction and Mill’s manipulation according to Cyriax approach, while group B received Mulligan mobilisation with movement techniques. Patient-related tennis elbow evaluation index was used to collect data which was analysed using SPSS 20.

Lateral epicondylitis (LE), also known as tennis elbow or lateral epicondylalgia, is a common musculoskeletal disorder of the elbow joint.1 Studies have reported 1.6% to 23.1% LE prevalence in workers involved in repetitive upper extremity activities while life-time prevalence of LE in tennis players ranges 40-50%.2,3 Though it is less common in general population and it affects only 1-3% population, it is associated with incredible costs and human sufferings.2,4

Contractile overload that chronically stresses the tendon near the attachment on the humerus is the primary cause of epicondylitis.1 In literature, different invasive and non-invasive treatment protocols have been proposed for LE management.5 In non-invasive treatment options, physical therapy modalities, such as myofascial release, therapeutic ultrasound, mobilisation and taping, are most commonly used for LE management.6

Mulligan mobilisation with movement (MMWM) is a form of manual therapy that includes a sustained lateral glide to the elbow joint with concurrent physiological movement.7 Contrary to traditional mobilisation techniques in which mobilisation is applied in static condition, MMWM emphasises on mobilising the joint during physiological movement.  Studies have reported that MMWM is effective in reducing pain and improving functional status of the elbow joint in LE patients.7,8

Cyriax approach (CA) incorporates deep transverse friction (DTF) massage followed by Mill’s manipulation, which is performed immediately after DTF massage.9 The application of DTF massage produces therapeutic benefits by breaking down the adhesions between repairing connective tissue and surrounding tissues, thus softening the scar tissue and mobilising  the cross-links between the mutual collagen fibres.10 Moreover, DTF massage produces vasodilatation and increased blood-flow to the affected area. This facilitates the removal of chemical irritants and increases the transportation of endogenous opiates, resulting in a decrease in pain.11

The clinical trial was conducted at the District Headquarter Hospital (DHQ), Bahawalnagar, Pakistan, from September to December 2018. After approval from the ethics review committee of Isra Institute of Rehabilitation Sciences (IIRS), Isra University, Islamabad campus, the sample size was calculated using an online calculator12 with 80% power (1 – beta or % chance of detecting).13 The sample was raised using purposive sampling technique in the initial phase. Those included were LE patients of either gender aged 20-50 years having symptoms for >2 weeks. A trained physical therapist with Masters in Orthopaedic manual therapy diagnosed the patients on the basis of physical examination, such as positive Mill’s test, Cozens test and Maudsley’s test, and local tenderness on palpation over extensor carpi radialis tendon. Reports of musculoskeletal ultrasound were used to confirm the LE diagnosis. Patients with pain intensity >7 on numeric pain rating scale (NPRS), and/or having history of acute trauma, fractures, surgery and/or having any neurological or systemic disease were excluded.

Data was collected after obtaining informed consent from the participants. Envelopes containing equal number of group ‘A’ and group ‘B’ labels were placed in a container and the patients were asked to pick one from it. These labelled papers were folded in such a manner that the labelling was not visible to the participants and the physiotherapist.

Patients in group A received DTF massage and Mill’s manipulation according to CA for 4 weeks, while group B received MMWM technique for 4 weeks.

Each participant in group A received 12 sessions over 4 weeks. Each session started in sitting position and initially DTF massage was done at the lateral compartment of the elbow joint and immediately after that Mill’s manipulation was performed at the elbow joint with wrist in flexed and forearm in pronated positions. Each session lasted 20-30 minutes. The session was repeated three times a week for 4 weeks.

Each patient in group B also received 12 sessions over 4 weeks.  Each session started in sitting position and MMWM was performed. Initially, lateral glide at the elbow joint was performed and after holding it, the therapist asked the patient to make a fist and open the fist. The therapist repeated the procedure 36 times in one session. After 12 repetitions, a short rest period was given. Each session lasted 35-45 minutes. The session was repeated three times a week for 4 weeks.

Data was analysed using SPSS 20. Shapiro–Wilk test was used to check normality of data, which was found to be not normally distributed, leading to use of non-parametric tests for analysis. For inter-group analysis, Mann Whitney U test was used.  P<0.05 was considered significant. Because the data was not normally distributed, median and inter-quartile range (IQR) was used to express the data instead of mean and standard deviation. 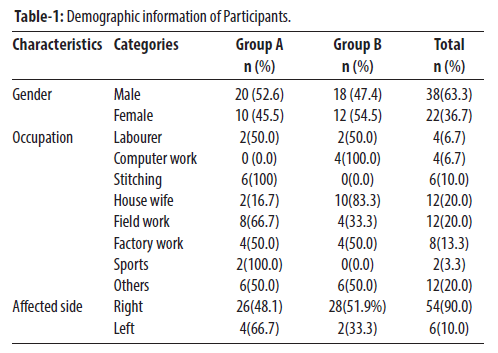 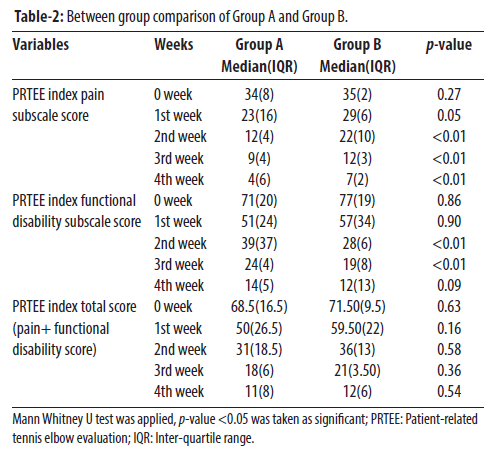 LE is a common elbow lesion which is characterised by pain at elbow joint and week grip strength.15 Weak grip strength and pain due to LE considerably affects quality of life of the patients.16 For example, simple tasks such as holding a cup of tea or giving a handshake on the affected side are  difficult for these patients. Despite the fact that LE is associated with incredible human sufferings, due to its low prevalence in general population, it did not receive much attention from researchers and few studies are available regarding LE in general population.17 More than 40 treatment approaches have been reported in the management of LE, but none has been proven superior over the rest.18 Therefore, the current study was designed to determine effectiveness of two MMWM and CA physiotherapy modalities.

The current study showed CA was more effective in reducing pain compared to MMWM. Stasinopoulos D et al. also reported  that DTF massage in combination with Mill’s manipulation is effective for managing pain associated with LE.22 It is also reported that in CA, earlier pain improvement is actually due to massage because it produces vasodilatation and increased blood-flow to the area, which not only causes removal of chemical irritants, but also increases the transportation of endogenous opiods to the affected area.10,23,24 Brosseau et al. studied DTF massage for the management of patients with tendinitis and concluded that it is the treatment of choice for patients with tendinitis.23

Due to time limitation and non-availability of LE patients, the sample size of the current study was too small to allow generalisability of the findings. Secondly, time for follow-up of patients was limited due to which long-term effects of the treatment protocols were not noted. As the study was conducted in a clinical setting, it was not possible to control the confounding variables which might have affected the results. Blinding of the therapist to the treatment was not possible, and, therefore, the physical therapists who worked and assessed the patients for this trial were aware of patients’ group allocation.

Despite these limitations, the current study was a preliminary study which thoroughly investigated effectiveness of MMWM and CA in the management of LE patients.

8.      Bhardwaj P, Dhawan A. The relative efficacy of mobilization with movement versus Cyriax physiotherapy in the treatment of lateral epicondylitis. Indian J Physiother Occup Ther. 2011; 5: 24-37.