This study was conducted to assess the frequency of pre-operative malnourishment in patients being treated for oral cavity squamous cell carcinoma. A retrospective chart review was carried out at the Aga Khan University Hospital, Karachi, on 62 patients. Patients were screened pre-operatively through a standard nutritional assessment tool at the time of admission to assess for malnutrition. Mean age of presentation was 48.34±13.11 years, mean height was 165 ± 8.62cm, weight 66.09±14.98 kg and BMI of 24.09±4.84. Males were 82.3% and 17.7% were females. At the time of admission, a significant number or patients, 12 (19.4%) were prone to malnourishment, while 3 (4.8%) patients were malnourished: Assessment was done by using a standardised nutritional assessment tool.

Squamous cell carcinomas are mostly observed in patients in the region of the head and neck.1 Due to the malignancy itself 52% of the patients are malnourished at the time of diagnosis. Malnutrition in these patients has been defined as BMI of <18.5-20 kg\m² and unintended weight loss in one to six months. The oral intake is poor leading to a compromised functional ability, increased length of hospital stay resulting in a greater financial cost. Mc. Racken et al reported that patients with a BMI of 25 or less had a survival of 24.6 months and patients with a BMI of 25 had survival rate of 28.3 months.2 Cachexia is commonly seen in patients with cancer which is due to decreased intake and increased catabolic activity caused by the tumour, including TNF-a, interleukins, gamma interferon and recently detected cancer cachectic factor 24K.3

Poor dietary habits and addiction to alcohol and smoking are frequently seen in such patients. Adding to this, the site of the tumour itself causes dysphagia and odynophagia.4,5 Malnutrition prior to the start of treatment in head and neck cancer patients coupled with the extensive treatment these patients undergo, including surgery and radiotherapy, leads to a vicious cycle of decreased skeletal mass and function, malnourishment followed by various complications such as wound dehiscence and delayed healing.6,7 A significant proportion of patients with head and neck cancer die due to the outcomes of malnutrition rather than malignancy itself.8

Different screening tools have, over the time, been validated such as Nutritional Risk Screening Tool 2002 (NRS 2002), Malnutrition Universal Screening Tool, Nutritional Risk Index, etc. Over the time these tools have aided the health professionals to identify the risk of malnutrition in cancer patients. We aimed to assess pre-operative malnutrition in our cohort for the treatment of oral cavity squamous cell carcinoma based on a validated nutritional screening tool.

A descriptive cross sectional study was conducted from January 2014 to December 2014. Prior to the start of the study, exemption from the institutional ethical review committee was obtained. The study site was a tertiary care hospital, where initial nutritional assessment was done. Data was collected via purposive sampling.

Eligibility criteria included patients with confirmed diagnosis of squamous cell carcinoma of oral cavity above the age of 18 years. Exclusion criteria were all patients with histological findings other than squamous cell carcinoma, distant metastasis before the commencement of treatment and patients treated primarily outside the ENT department or treated outside AKUH. Patients with missing data, who did not complete their treatment and who were lost to follow up were excluded from the study.

Identification of malnutrition was done at the time of hospital admission, a night prior to the day of surgery, using NRS 2002. It consists of four questions: whether BMI was < 20.5 kg\m², if the patient had lost weight in the previous three months, whether there was any decreased appetite and if the patient was severely ill? If the screening score resulted in a yes score final screening was performed.9 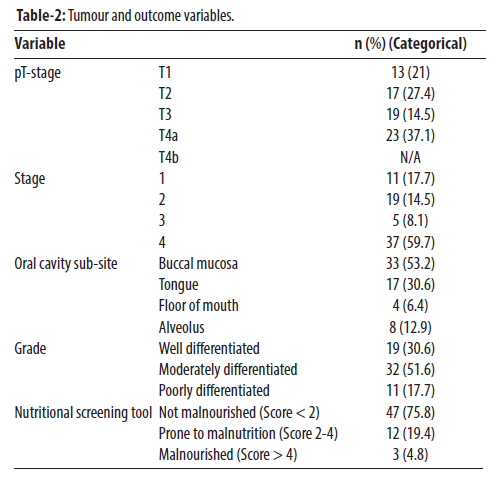 Oral cavity carcinoma patients are at an increased risk of malnutrition at the time of presentation as seen in our study. Every effort should be made for correcting the nutritional status of the patients. A prospective study would accurately assess the prevalence of malnutrition in patients presenting with oral carcinoma.