Objective: To compare the effects of physiotherapy with and without manual therapy in the management of postural neck pain.

Methods: The randomised controlled trial was conducted at the Physiotherapy Department of South City Hospital, Karachi, from September 2017 to July 2018, and comprised subjects with >6 months of neck pain with no related medical dysfunction. The patients were enrolled by non-probability consecutive sampling technique and   randomly divided into Group A and Group B using computer-generated numbers. Group A received physiotherapy along with manual therapy, while Group B only had physiotherapy. Group A was also taught a home exercise programme. A printed exercise sheet was provided with frequency and repetition details. Visual analogue scale for pain intensity level and neck disability index were used to measure outcome at 3rd and 12th week. Data was analysed using SPSS 22.

Conclusion: Physiotherapy with manual therapy was found to be better compared to physiotherapy alone.

Neck pain is a major issue around the globe which affects all age groups. It has been identified that neck pain is the most common cause behind visits to physiotherapists and general physicians and involves a huge financial burden annually.1 Almost 75% of the population suffers from neck pain at some point of their lives. The most affected population is middle-aged population which has the highest prevalence of neck pain.2 It accounts for around 25% of all outpatient visits to physiotherapy with a lifetime incidence rate of 12-70% among the general population although men are less likely to be affected than women.3,4 Management of neck pain through non-invasive techniques includes manipulation, mobilisation, soft tissue therapy/work, cervical collars, exercise therapy, acupuncture, pain relief through medicines and electrotherapy, including short wave diathermy, ice application and transcutaneous electrical nerve stimulation (TENS).4 Indications for the management of neck pain by cervical stretching and strengthening exercises has low to moderate effect.5 The treatment of chronic neck pain is very effective through the strengthening and stretching exercises.6 According to the findings of a survey conducted in Canada and Finland, 70% of the young population experienced neck pain at some point in their lives,7 while in Pakistan 16.8% population was found to have work-related neck pain.8 Studies have concluded that there is a positive role of  spinal manipulative technique consisting of high-velocity thrust with low amplitude hands-on application at spinal segment, specially for  short-term outcome, but still some doubts about the role of manual / home-based exercise are there in relation to acute, sub-acute and chronic stages.9 There is a need to improvise the methodological quality of home-based exercises recommended to the patients of acute, sub-acute and chronic neck pain, and physiotherapy alone or with manual exercise was found to be not beneficial enough.10

There are many different methods, including postural, manual, psychological, relaxation and visual training techniques. These methods had far better results in reducing pain intensity, improving emotional response, and decreasing postural disturbances and early return to work.11

There is a scarcity of local literature on this topic, and the current study was planned to fill the gap by comparing the effects of physiotherapy with and without manual therapy/home-based exercises for the treatment of chronic neck pain.

The randomised controlled trial (RCT) was conducted at the Physiotherapy Department of South City Hospital, Karachi, from September 2017 to July 2018, and comprised patents with neck pain. The sample size was calculated using Open-Epi online calculator,12 taking NDI value at 12th week with manual therapy and exercise regimen to be 16.83±2.3 and exercise regimen alone as 19.13±2.213 and while keeping the confidence level at 95% and power of test 90%.  Sample size was achieved by using non-probability consecutive sampling technique.

To exclude the effects of serious pathologies, all patients were examined first by rheumatologists, orthopaedics and neurophysicians or neurosurgeons, and all necessary investigations, including magnetic resonance imaging (MRI) of the cervical spine was done. Patients with the history of neck pain >6 months without having any medical dysfunction and who were found safe for high velocity trust manipulative technique were included. Those with conditions like spinal instability, whiplash injury, osteoporosis, fracture of cervical spine, tumour of spine, pain post-cervical spine surgery, disc herniation, stenosis of cervical spine, rheumatoid arthritis and patients who already had spinal manipulative sessions were excluded.

After taking informed consent from all the patients, they were randomised into two groups using computer-generated random numbers. Intervention Group A received physiotherapy along with manual therapy, while control Group B received only physiotherapy. For manual therapy in Group A, home-based exercise plan was taught and explained, and a printed programme sheet about repetition and frequency of the exercises was given to them. The plan included a set of strengthening exercises consisting of isometric, concentric and eccentric exercises with rest in between, and a set of stretching exercises of cervical spine, like rotation side-to-side, lateral flexion side-to-side, extension and sternocleidomastoid stretches, levator scapulae and pectoris muscles stretches. Study outcomes were measured using VAS for pain intensity level (0 to 10) and NDI post-treatment at 3rd and 12th week. Data was analysed using SPSS 22. Independent t-test was used to compare inter-group post-treatment effects with confidence interval (CI) 95% and power of test 80%. 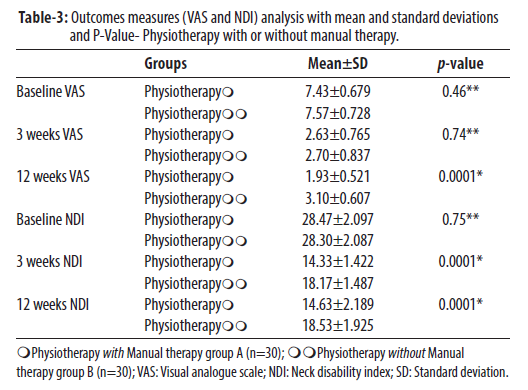 The findings indicated combining physiotherapy with manual therapy/home-based exercise as a better option than physiotherapy alone. Replication of exact supportive findings with past studies is difficult because of the different methodologies and most studies explored short-term outcomes of manipulation as was the case with the current study.

A study suggested that for persistent type mechanical neck disorder, mobilisation and manipulation technique with exercises appeared beneficial in comparison the technique alone.10 In routine practice neck pain is seen as a common dysfunction. In literature, the ways of managing neck pain are still unclear about the efficacy of physiotherapy with or without home-based manual therapy. A systematic review concluded that in the management of both neck pain and lower back pain with the lack of long-term follow-up, spinal manipulative therapy and mobilisation technique is a viable choice. The current study showed major reduction in pain intensity in Group A compared to Group B over 12 weeks. A study finding reported similar results.14 Significant reduction was also observed in chronic neck pain, neck disability using spinal manipulation technique in this immediate level of follow-up.1

A study in chronic neck pain patients who were treated with physiotherapy along with additional methods like strengthening, stretching and aerobics exercises reported similar results.16

A systematic review established that in obtaining short-term pain relief in patients with neck pain, manual therapy is more effective than muscle relaxants or regular medical care. Another study reported low to moderate improvement in patients who performed manual exercises with physiotherapy for the treatment of chronic neck pain.15,17

Occupational status has been reported as a major risk factor for neck pain in employees spending more than 90% time working in a sitting position.18

Similarities have been found in literature in not finding any difference among chronic neck pain patients assigned to intensive training, active physical therapy or to chiropractic manipulation in terms of short- or long-term outcomes.19 In a study, pre-treatment mean neck pain score in manual therapy group and stretching exercises groups reduced after 4 weeks, but the difference was not significant. Neck and shoulder pain and disability index score reduced significantly in both the groups (p=0.01). Reduction in pain and disability in women with non-specific neck pain was noted in both stretching exercise and manual therapy groups. There was no major difference found between the 2 treatment modalities in terms of effectiveness. The study suggested that at least in the short term, stretching exercises can be recommended.20

A systematic review concluded that combining different forms of manual therapy with physiotherapy had better results than physiotherapy alone, and also that mobilisation need not be implicated at the initial symptomatic level for the recovery of neck pain patients.23 A study found that the combination had better results in reducing symptoms. However, this study failed to highlight the therapeutic value of manual techniques since it was not clear if this positive effect was due to the application of exercise or to the combination of exercise and manipulation.24

The limitation of the current study is that despite being an RCT, it does not have a trial registration number.

There was significant improvement found in VAS and NDI scores in both groups, but combined therapy proved to be more efficient in terms of greater post-treatment improvement.