Objective:  To isolate and characterise multidrug resistant strains of Staphylococcus aureus from healthcare workers who are at potential risk of nosocomial infections.

Methods: The observational, cross-sectional study was conducted from November 2014 to April 2015 at different hospitals of Haripur and Abbottabad, Pakistan, and comprised ward and operation theatre staff. The isolates were identified on the basis of microbiological and biochemical tests and further confirmed by polymerase chain reaction. Disc diffusion method was used for antibiotic sensitivity testing, and panton valentine leukocidin and methicillin resistance mecA genes were detected using polymerase chain reaction.

Conclusion: A high number of hospital staff, including those working in operation theatres, were found to be carrying methicillin-resistant Staphylococcus aureus and multidrug resistant strains in their nasal passage that may be a source of infection to patients.

Staphylococcus (S.) aureus is one of the most common causes of healthcare-associated bacterial infections among humans, causing a range of illnesses, including skin and soft tissue, vaginal, urethral and intestinal as well as gastrointestinal (GI) infections.1,2 S. aureus hemolyses blood, coagulates plasma and produces extracellular enzymes and toxins that contribute to their virulence.3 S. aureus may also cause many epidemic and endemic infections and result in a high rate of mortality and morbidity.4,5 S. aureus is coagulase-positive which is considered the distinguishing characteristic for this bacterial species from other staphylococci.2

One of the leading causes of healthcare-associated infections is methicillin-resistant Staphylococcus aureus (MRSA).7 S. aureus nasal carriage has been identified as a risk factor for the nosocomial infections in general hospital population, surgical patients, general and haemodialysis patients among others.8 MRSA emerged for the first time in the United Kingdom in the early 1960s and since then it is one of the major health problem globally.9

Penicillin was introduced for the first time in the 1940s and at the time of introduction, 95% isolates were susceptible to it.10 Beta lactamase-resistant type of penicillin, called methicillin, was introduced in the 1960s with the hope that it would work better, but soon after its introduction, methicillin-resistant strains emerged and disseminated globally. Nosocomial acquisition of MRSA has been a worldwide problem and a leading cause of healthcare-associated as well as postsurgical infections.10,11

Studies have reported that the MRSA carriage by hospital staff may be a risk of transmission to those receiving treatment.8 During any surgery or injury, skin and mucous membrane barrier may be broken, and act as an entry point of skin bacteria into the body.2 MRSA infections have become more difficult to treat nowadays due to high levels of antibiotic resistance against almost all conventionally used antimicrobial agents.9-11

The current study was planned to isolate, identify and test antibiotic sensitivity of S. aureus strains from those working in operation theatre (OT) or hospitals wards.

The observational, cross-sectional study was conducted from November 2014 to April 2015 at three hospitals of Haripur and two of Abbottabad, in the Hazara Division, Pakistan, and comprised full-time ward and OT staff working for at least a year, including physicians, surgeons, nurses, ward boys, cleaners, technicians etc. who volunteered to participate. Those working for less than a year or those not willing to participate were excluded, and so were those who suffered from any sort of skin infection. The study was carried out after approval from the ethics review committee of The University of Haripur and the identities of both the participants and the hospitals were kept confidential.

Nasal samples were collected using sterile cotton swabs. Data such as age, gender, employment and medical history was also recorded. The samples were transported to the microbiology lab of the University of Haripur for further processing. 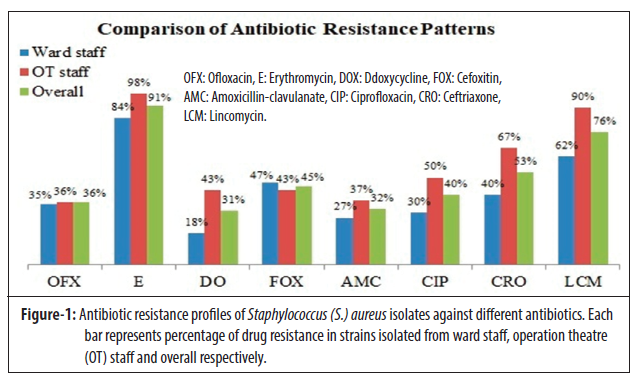 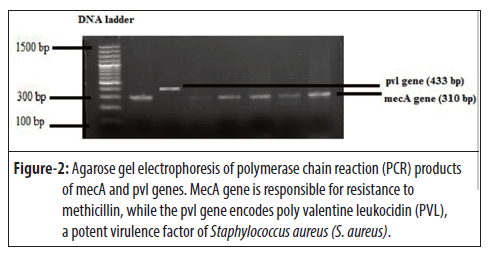 The findings of the present study are alarming with an overall detection of 80.3% S. aureus and 36.1% MRSA.

S. aureus is one of the most common causes of nosocomial infections worldwide. Penicillin was considered a drug of choice for the treatment of staphylococcal infections at the time of introduction in the 1940s, but, presently, over 90% strains show resistance to pencillin.17

Multidrug resistance (MDR) has been increasing in S. aureus since the introduction of antibiotics in the 1940s. According to the National Nosocomial Infection Surveillance (NNIS), a unit of the Centre for Disease Control and Prevention (CDC), methicillin resistance of S. aureus among hospitals in the United States increased from 2.4% in 1975 to 29% in 1991. MRSA strains were reported for the first time in England in the 1960s.18 Since then its prevalence is on rise and in almost all countries of the world.

It is reported in studies that death toll and risk of nosocomial infection and sepsis is higher with MRSA compared to methicillin-sensitive Staphylococcus aureus (MSSA).22,23 Further, it is also reported that antibiotic resistance profiles of MRSA is higher compared to MSSA.24 In our case, 29% strains were carrying the pvl gene, which is also a risk for healthcare workers themselves.

S. aureus amd MRSA prevalence was found to be alarming, as hospital staff may be a cause of both healthcare-associated infections as well as an outbreak by highly resistant strains of S. aureus. Appropriate infection control measures must be ensured at both public and provate sector healthcare facilities.

Acknowledgements: We are grateful to Vice-Chancellor of the University of Haripur for approving financial assistance as well as to the staff and administration of the participating hospitals.

Source of Funding: The University of Haripur and COMSATS University, Islamabad.