Objective:  To determine the effects of core stability exercises on backache and quality of life of postmenopausal women.

Method: The comparative study was conducted at the Department of Physical Therapy, Margalla General Hospital, Rawalpindi, Pakistan, from February to June 2018, and comprised post-menopausal woman aged 40-60 years having backache who were randomly divided into experimental group A and control group B. Group A underwent core stability exercises along with traditional therapy, while group B had traditional low backache physical therapy. Each participant was treated three days a week for 12 weeks. The outcome was assessed using the manual muscle testing numerical pain rating scale, Oswestry disability index and Utian quality of life scale at baseline, week 6 and week 12. Data was analysed using SPSS 21.

Results: Of the 35 subjects initially enrolled, 24(68.5%) completed the study. Of them, 14(58.3%) cases were in group A and 10(41.6%) controls in group B. The overall mean age was 54.54±5.13 years, mean menopause duration was 99.79±50.02 months, and mean duration of backache complaint was 23.95±14.85 months. Differences in outcome were significant between the groups for flexion and extension manual muscle testing and Utian quality of life scale (p<0.05) and non-significant for numerical pain rating scaleand Oswestry disability index (p>0.05).

Conclusion: Core stability exercises were found to have the ability to reduce pain, disability and to improve strength and quality of life.

About 80% population once in their life go through lower back pain (LBP) that causes significant loss of productive working hours along with disability.1,2 People suffering from chronic LBP (CLBP) and impaired function often experience anxiety and depression, and it has an impact on work and social life.3 LBP largely effects women aged 45-60 years, accounting for distress on social as well as economic levels.4

Age-predicted incidence of LBP was also found to be higher in post-menopausal women (90% between 40 and 60; mean age 50.1 years).5 Decline in psychological and cognitive function along with other health-related conditions, like heart disease, mood swings and risk of cancer, are of particular importance in post-menopausal women affecting their quality of life (QOL).6

The hormonal changes occurring in women during and after menopause may also have an impact on health-related quality of life (HRQOL) particularly in the physical, psychological and sexual spheres.7 Physical therapy remains the most advanced conservative option for LBP treatment8

Core stability or core strengthening exercises (CSEs) are increasingly becoming an important element of the sports world of therapeutics as it provides distal mobility with proximal stability.9 CSEs are supported strongly by theoretical principles for the treatment of spinal disorders that helps in decreasing pain and improving function in people suffering from LBP.10

Core strengthening has attracted limited research attention so far, but it has been promoted as a mode of rehabilitation, for performance enhancement, and as preventive measure against injuries related to the musculoskeletal and lumbar spine.11 The significance of CSEs in post-menopausal women with backache has been overlooked so far. The current study was planned to focus on CSEs in post-menopausal woman with LBP to investigate the effects of core strength training on LBP, disability, strength and the QOL.

The null hypothesis was that CSE would have no effect on postmenopausal women with LBP.

The comparative study was conducted at the Department of Physical Therapy, Margalla General Hospital, Rawalpindi, Pakistan, from February to June 2018, and comprised post-menopausal woman aged 40-60 years having backache.

After approval from the ethics review committee of Riphah International University, Islamabad, the sample size was calculated in the light of literature12 using Open–Epi calculator. The study was approved by the Ethics Committee of Margalla Institute of HealthSciences.

The sample was raised using purposive sampling technique. Those included were post-menopausal woman aged 40-60 years having backache. Those excluded were women with spinal cord injury or with marked degenerative arthritis of the spine. The organic causes of spinal pain were ruled out on the basis of history and/or radiology.  After written informed consent was taken from all the participants, they were randomised using sealed envelope technique into experimental groups A and control group B. The control group was given traditional LBP physical therapy management, such as moist heat pack, transcutaneous electrical nerve stimulation (TENS), and strengthening regimen. The experimental group had the same regimen along with CSEs. Each participant was treated three days a week for 12 weeks. Assessment was done at baseline, weeks 6 and 12 using manual muscle testing (MMT), numerical pain rating scale (NPRS), Oswestry disability index (ODI) and Utain quality of life (UQOL) tools.

Data was analysed using SPSS 21. Normality curve and Shapiro Wilk test were applied on all variables for data homogeneity. The data was skewed and significance value was < 0.05, so non-parametric tests were applied. P values were evaluated using Mann Whitney U test for inter-group analyses. pre-post difference was analysed by calculating mean differences from the baseline to final measures. 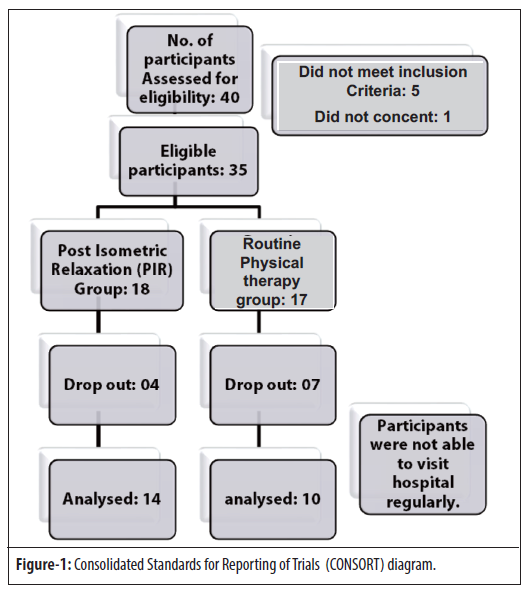 None of the variables showed significant difference at baseline (p>0.05). Post-intervention, the difference was significant for flexion MMT (FMMT), extension MMT (EMMT) and UQOL (p<0.05), and it was non-significant for ODI and NPRS (p>0.05) (Table; Figure 2). 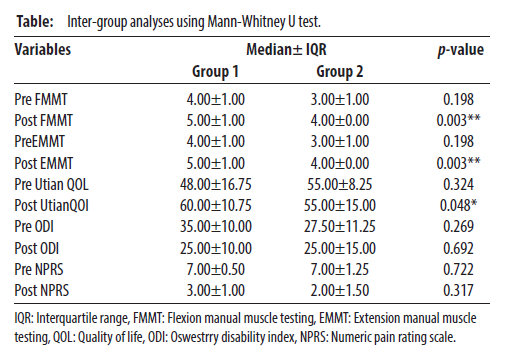 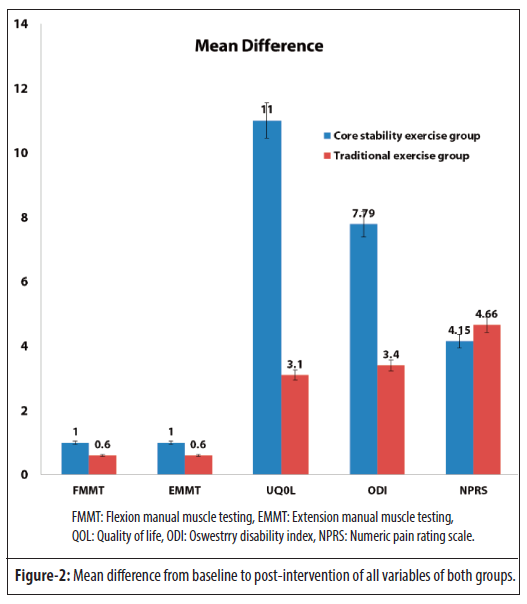 Although all variables showed improvements in both the groups, more improvements were noted in experimental group A (Figure 2).

CSES are increasingly becoming an important element in sports rehabilitation.9 These exercises are supported strongly by theoretical principles for the treatment of spinal disorders which helps in decreasing pain and improving function in people suffering from LBP.10 K. Amit et al. reported that CSEs reduced pain after 6 weeks of intervention.13 Patients with mechanical LBP continue to demonstrate improvement in pain and function following treatment comprising training regimens for lumbar mobilisation and CSEs in comparison with patients treated by specifically joint mobilisation techniques.1

Xue-Qiang Wang et al. reported that CSEs improved physical function considerably compared to general physical exercises in LBP patients.14 Decrease in disability was also noted in the participants of the current study, but were a bit more pronounced in CSE group. However, these results did not differ satsitically significant in inter-group analyses. These findings are also supported by a study which reported that CSEs helped reduce disability.15

In the current study, muscle strength significantly improved between and within the groups. Smith et al. suggested that CSEs were instrumental in counteracting age-related changes, core stability-based pilates as exercise played a key role in improving core strength and other parameters, such as balance, mobility, coordination for joints and spinal functions.16

Healthy and fit elderly people are reported to enjoy life better compared to those having disease. Health-related fitness can be greatly enhanced by training regimens in different ways. However, among post-menopausal women, it was unclear how various dimensions of health-related fitness interact with their QOL. Among the studied dimensions, back strength was found to correlate positively with QOL. On the other hand, a negative correlation was reported between increasing age and QOL.17

The current study found significant improvement in post-menopausal women;s QOL in both intra- and inter- group analyses. Küçükçakır N et al. reported that pilates as a treatment option may be a safe and effective alternative for improving QOL in post-menopausal women.18 Sinaki et al. also reported the effectiveness of exercise on the strengthening of the back muscles in women with mean age 56 years over a duration of three months. The study indicated that CSEs strengthened back muscles significantly.19

The current study has its limitations. Though the participants who completed the study were more than the required number, the sample size was  too small to allow generalisations. The dropout rate was high as most of the housewives had issues related to conveyance, while the working women could not stay away from work. In future studies, patient adherence should be maintained, and the treatment duration can also be increased as some parameters, like strengthening, take time to improve.

Both the experimental and control groups showed significant improvement in pain, disability and QOL post-intervention. Significant difference was noted in favour of CSEs compared to traditional exercises for strength and QOL.