A 25-year-old female patient visited our clinic with complaint of cyclic haematuria. She had previous two Caesarean Sections at a secondary care hospital. Her complete urinalysis showed abundant red blood cells. Through computed tomography a fistula tract between the posterior wall of the bladder and the anterior wall of the lower uterine segment was diagnosed. The Cystoscopy revealed a fistulous opening with a diameter of nearly 1.5 cm localized between the bladder and uterine cavity. Fistulae was repaired by abdominal approach without transection of bladder. Surgery was performed by mobilization of bladder and wide anterior uterine dissection. A 2cm defect in the lower uterine segment was identified and was closed with 0 polyglycolic acid suture. Bladder defect was repaired in two layers and omental tissue flap was placed between the two surfaces. At 6 months follow the up patient was asymptomatic.

Vesicouterine fistulae (VUF) is an iatrogenic abnormal communication developing between the urinary bladder and the uterus or cervix. Among urogenital fistulae, the incidence of vesico-uterine fistulae is reported as 1% to 9%1 and 83–88 % of these are associated with lower-segment Caesarean Sections.2 The classic presentation of a vesicouterine fistula,described as Youssef syndrome is characterized by cyclical haematuria,  amenorrhoea and  urinary incontinence.3

A 25-year-old patient presented at the outpatient department of Aga Khan University Hospital, Karachi on October 12, 2017 with complaint of cyclic haematuria. She had previous two Caesarean Sections at a secondary care hospital. During her last surgery she had intensive postoperative haematuria, which was treated by retaining an  indwelling catheter for a month, expecting spontaneous closure of VU fistulae. She had no complaints suggesting recurrent urinary tract infection and incontinence. Her gynaecological examination was unremarkable except observation of red urine cyclically. Her complete urinalysis showed abundant red blood cells however her urine culture revealed no growth . Micturating cystogram was performed which showed an abnormal communication between the uterine cavity and the urinary bladder (Figure-1). 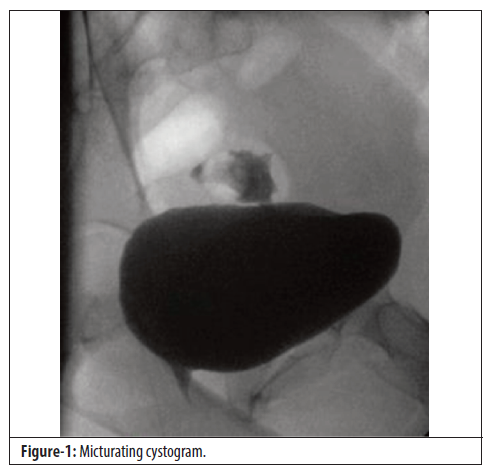 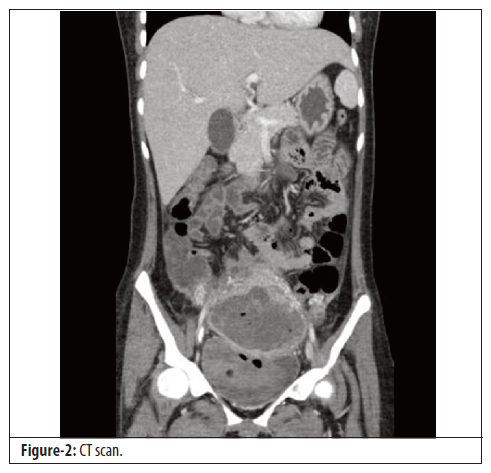 Patient gave an informed consent for examination under anaesthesia, cystoscopy and fistulae repair procedure. Cystoscopy revealed a fistulous opening with a diameter of nearly 1.5 cm on the posterior wall of bladder, rest of bladder mucosa, ureteric orifices and bladder capacity were normal. Both ureters were stented. Surgical technique using transabdominal approach was used for layered closure of fistulae using omental flap. Bladder was seen adherent to lower uterine segment. A wide anterior uterine dissection was performed to mobilize the bladder. Bladder cavity was inspected and fistulous opening was enlarged to around 2 cm after dissection. Bladder wall was closed in two layers using polyglycolic 2/o, omental tissue flap was pulled and placed between the two surfaces and uterine defect closed with 0 polyglycolic acid sutures. An intra-operative retrograde filling with methylene blue was performed to confirm watertight closure. For two weeks postoperatively, indwelling catheter was left in situ. She remained asymptomatic till 12 months of follow up in our clinic postoperatively. Her menstrual cycles were normal and she had no lower urinary tract symptoms.

A rise in Caesarean Sections rate have led to an increase in the number of cases of genitourinary fistulae.4 The clinical presentation of uterovesical fistulae may vary. It usually presents as urinary incontinence, amenorrhoea, and cyclic haematuria but may present as secondary infertility and miscarriage during the first trimester.2

The factors that lead to the formation of VUF includes difficulty or inadequate mobilization of the bladder from the lower uterine segment, manual removal of the placenta, forceps vaginal delivery, placenta percreta, aberrant sutures in attempt to achieve haemostasis, uterine rupture and previous Caesarean Section.5 An unrecognized bladder injury might persist and lead to a VUF. “Menouria” was first described by Youssef in 1957.6 On the basis of routes of menstrual flow Jo´zwik  proposed classification of VUF into three types. Type I, known as Youssef’s syndrome is described as a triad of menouria, amenorrhoea, and without incontinence of urine.7 Type II is associated with menstrual blood flow via both the bladder and vagina. Normal vaginal menstrual flow and no menouria are characterized as type III.

The fistula is usually reported between the anterior lower uterine segment or rarely the cervix and the supra-trigonal part of the posterior bladder wall. The fistula that presents above the internal cervical os does not present as urinary incontinence because of the functional valve mechanism of the isthmic sphincter which maintains sufficient pressure to prevent urinary leakage from the vagina.2 When the fistula presents below internal cervical os, total vaginal urinary leakage occurs. Normally, the intravesical pressure during the filling phase rarely exceeds 20 cm H2O but with detrusor muscle contraction in voiding phase, it rises up to 50 cm H2O. Intrauterine pressures are higher than the pressures in the bladder and vary with phases of the menstrual cycle. Intrauterine pressures during the proliferative phase and secretory phase are 35 to 70 cm H2O and 55 to 100 cm H2O respectively, whereas during menstruation intrauterine pressures are 130–160 cm H2O.2

Conservative management is an option for early or immediate postpartum phase with continuous bladder drainage of atleast 4-6 weeks. Five percent success rate has been reported for spontaneous healing of VUF with conservative management.3 Exogenous Hormonal treatment induced amenorrhoea, allows the fistula tract to close and the majority specify a period of 6 months for its treatment.9 The definitive treatment is surgical management with preferred route of transabdominal approach. The choice of surgical management depends on the preservation of fertility or hysterectomy and bladder closure. For a woman having reproductive wishes, as in our case, uterine-sparing surgery is to be considered.2 Laparoscopic approach for repair of VUF has also been considered. Its advantages are quicker recovery convalescence, short hospital stay, good cosmetic results, and success rates are similar to open abdominal surgery.10 In literature we found UV fistula repair by longitudinal dissection of bladder using O’Conor method. It has been observed that this procedure is associated with detrusor injury, bladder scarring, reduced capacity and de novo long standing lower urinary tract symptoms (LUTS).11,12 We performed dissection between the lower segment of uterus and the bladder, and preferred layered closure of fistulae using omental flap as by Basatac.13

In subsequent pregnancies careful monitoring will be required, as there is a small but potential risk of scar dehiscence and/or recurrent fistula formation.14 After UVF repair, next delivery by Caesarean Sections has been recommended.15 To minimize  the  risk  of  fistulae  formation,  meticulous attention to surgical principles, and careful dissection of the lower uterine segments should be carried out.16

We have reported a new surgical technique for vesicouterine fistulae repair without opening the bladder across its entire length. The patient had an uneventful surgery and good postoperative recovery.