Objective: The purpose of the study was to find out the moderating effect of neuropsychiatric symptoms in the relationship between positive-negative symptoms of schizophrenia with quality of life of schizophrenic patients.

Subject and Methods: This cross-sectional study was conducted at Lahore and Sargodha, Pakistan. Data was collected by administering the Positive and Negative of Schizophrenia Questionnaire, Quality of Life of Schizophrenia Scale and Neuropsychiatry Inventory.  SPSS-23 was used for data analysis. The study was completed in one year. The data was collected from September 4, 2017 to November 1, 2018 after 10am.

Schizophrenia could be a severe disorder that effects the way someone thinks, and acts. Individuals with psychosis can appear as though they have lost contact with reality. They can hear voices which others do not realize. They assume others are trying to harm them. Psychosis signs will make that difficult for someone to travel with others, visit college, keep a job, or make sure of day to day tasks. Psychosis is an illness with main features being significant dysfunctions in thought process, academic activities, disturbed sexual functioning, hallucination, delusion, confused behaviour and also the weak emotional responses.1,2 Symptoms of schizophrenia are usually divided into positive and negative symptoms due to their effects and adjacent treatment. Positive symptoms are those which seem to reflect in the form of delusions and hallucinations whereas negative symptoms include diminishing of affect, apathy, anhedonia, deficient social interest, poverty of speech and thought, reduced social drive, loss of motivation, and inattention to cognitive or social input.

Participants of the present study comprised of 100 hospitalized patients of schizophrenia with age ranging between 25 to 45 years (34.52±7.51). Young and middle aged adults were included in the sample due to growing prevalence of schizophrenia in the youngsters. The sample size was calculated through g-power16 which confirmed that the sample size is desirable for the present study. Data was collected from different hospitals and mental health facilities situated in Lahore and Sargodha, i.e. Pakistan Institute of Mental Health, Lahore (n=30, 30%), Fountain House, Lahore (n=21, 21%), Azam Center, Sargodha (n=10, 10%), Fountain House, Sargodha (n=29, 39%), and DHQ, Sargodha (n=10, 10%). Institutional Review Board (IRB) in University of Lahore, Sargodha Campus, Sargodha reviewed the research on the basis of ethical and legal aspects and approved the research by keeping in view that research is causing no harm or risk for the participants of the study. Patients of joint family system (n=60, 60%) and nuclear family system (n=40, 40%) participated in the study. Data was collected on temporarily stable patients (Under medication). Purposive sampling technique was used for data collection. The sample comprised of only male patients because schizophrenia has greater prevalence in men as compared to women counterparts.17

The participants provided the information on their positive and negative symptoms of schizophrenia, neuropsychiatry symptoms, and quality of life. Informed consent was taken from the schizophrenic patients and their care takers by proceeding the information that “We are conducting a research on different psychological problems faced by mental health patients. It is an academic research in which findings will be used for research purpose only. You have right to withdraw from the research at any stage. This research will cause no harm for your health, thus if you are personally willing to provide the required information than you may participate in the study”. The scales were translated in Urdu language by using Oblique Translation Technique. In this study, positive and negative symptoms of schizophrenia were measured with Positive-Negative Symptoms Questionnaire (PNS-Q).17 The inventory was given to the mental health practitioners and they rated their patients. The PNS-Q-Informant was a 68-item questionnaire of true/false format that was intended for the caretaker of a patient. The scale had High internal consistency for each positive (Cronbach’s alpha = 0.88) and negative (Cronbach’s alpha = 0.89) subscales.

In the present study, neuropsychiatric symptoms of schizophrenia were measured with Neuropsychiatric Inventory (NPI). The Neuropsychiatric Inventory (NPI) was developed by Cummings et.al.19 to measure dementia-related behavioural symptoms which they felt other measures did not appropriately report. The Inter-rater reliability ranged from 93.6% to 100%, dependent on the sub-domain. Test-retest reliability was also shown to be high (Cronbach’s alpha = 0.79). The NPI originally examined 10 sub-domains of behavioural functioning. The inventory was given to the mental health practitioners and they rated their patients’ psychiatric symptoms.

In the present study, schizophrenia related quality of life of schizophrenic patients was measured with Schizophrenia Quality Of Life Scale (SQOLS).20 It contains 33 items combined in two domains: psychosocial feelings (22 items) and thought and vitality (11 items). In the item-total correlation, the magnitude of items range from 0.47 to 0.88 which is greater than 0.40 and therefore satisfactory to retain the item in all scales.21 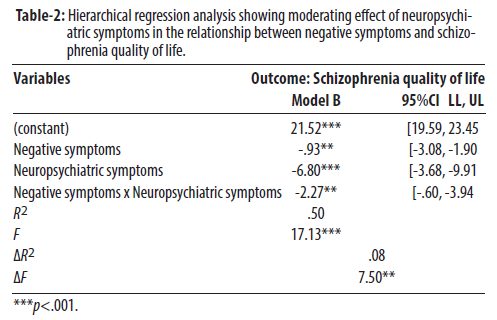 The study executed little control over the confounding factors while testing the moderation model. Thus the study has possibly low internal validity which can be improved in the future research by exerting control on the confounding variables. All scales were translated in Urdu language by the researchers which should be validated in future research.

The study confirmed that besides positive and negative symptoms, the neuropsychiatric symptoms have an additive effects in reducing the level of quality of life. Thus the study confirms that while maintaining the quality of life of schizophrenic patients, dual factors should be taken into consideration—i.e. psychological symptoms like positive and negative symptoms and neuropsychiatric symptoms.

18.    Deyling JL. Validation of the PNS-Q-SELF and the PNS-Q-INFORMANT for the Assessment of Insight in Schizophrenia. Doc Dis, Cle Sta Uni, 2008.