How childhood diseases awareness contributes to minimize the risk of disease severity in children under five age: An evolutionary study

Objective: To scrutinise the contribution of childhood disease awareness in mothers to minimise the risk of disease severity in children aged <5 years and to evaluate the effectiveness of a proposed app in this context.

Methods: The evolutionary study was conducted in Children's Hospital and the Institute of Child Health Multan from September 2018 to February 2019 and comprised two sessions with the app involving 30 mothers who were provided with smartphones with the app installed. The mothers were divided into 4 age groups. The app was evaluated using quantitative and qualitative measures. Suggestions and opinions were obtained in the first session and all suggestions were implemented by the second session.

Conclusion: All subjects showed acceptance for the app and affirmed its easy usability, especially for illiterate mothers.

Paediatric healthcare is a challenging issue across the globe. It is an irrefutable truth that millions of deaths occur each year mostly in those aged <5 years.1 As stated by the World Health Organisation (WHO), globally 15,000 children aged <5 years, died per day, accumulating to 5.6 million in a year in 2016.2 Out of 5.6 million, 83% of deaths were caused by infectious and nutritional deficiencies.3 Similarly, 3.6 million deaths were recorded in 10 African and South Asian countries. According to the United States (US) Census Bureau, Pakistan population was 207 million in 2017.4 The total population of children aged <5 was 25,148 in 2017.2 In the South Asian region, Pakistan is ranked first in child mortality.5 Over the last decade, Pakistan has greatly minimised the mortality rate of children aged <5 years. The mortality rate of such children was 101.6 in 2005 which decreased to 78.8 in 2016.6 Despite the improvement, however, the 4th goal of the millennium development goals (MDGs), which is 'Reduce Child Mortality', predited 4.6 million deaths per year for 2016-30 period and 8% of these deaths have been predicated to occur in Pakistan.5 Various studies conducted in Pakistan have identified the key causes behind <5 years mortality, including lack of childhood diseases cognizance, insufficient maternal education, lack of access to medical facilities, lack of familiarity with smart-tech and the lack of mHealth education tools.7-9 Various studies have shown a strong association between maternal education and children mortality.10 However, maternal education is not emphasised in Pakistan the way it should be. It has been noticed that most of the mothers are not familiar with diseases' symptoms, their precautions and child's care at home.11 To promote child health development, the government launched several initiatives in various regions of the country. Maternal, Neonatal and Child Health (MNCH)10 was launched by the United Nations Children's Education Fund (UNICEF) in 2010 to monitor the health of mother and her baby. Similarly, School Health Programme by United Nations Educational, Scientific and Cultural Organization (UNESCO)12 and the Health and Nutrition Programme by National Integrated Development Association (NIDA) Pakistan were operational in 2010-1713 and in 2012, respectively, to promote physical health activities of children in schools and to introduce healthy nutrition. To the best of our knowledge, there is no mHealth platform focussing on minimising the mortality of children aged <5 years. As such, we planned an mHealth-based solution called the EasyDetectDisease app.14 The proposed app facilitated the mothers in diagnosing early symptoms and provided complete knowledge about the most frequently occurring paediatric diseases in children at home. The current study was planned to scrutinise the contribution of childhood disease awareness in mothers to minimise the risk of disease severity in children aged <5 years and to evaluate the effectiveness of the proposed app in this context.

The evolutionary study was conducted in the Children's Hospital and Institute of Child Health, Multan from September 2018 to February 2019 and comprised two sessions with the app involving 30 mothers. Before work started on developing the app, related data was collected from the Children's Hospital and Institute of Child Health, Multan (CH&ICHM). All data related to disease descriptions, prevention of diseases and nutrition was collected from the WHO website4 and from CH&ICHM paediatricians. An android application was developed with five modules: The Disease Diagnostic module facilitated the easy detection of disease by asking the mother about symptoms of her child; the Disease Description module provided the details of the diseases, i.e., life-threatening signs, disease spreading, incubation periods, causes and preventions; the Preventive Measures module defined the possible ways of prevention against a particular disease; the Dietary Guidelines module provided nutritional instructions; and the Instructional Guidelines module provided expert opinions by CH&ICHM paediatricians. The architecture of app supported a user-friendly interface, which provided the facility of Urdu language as well for mothers who could not understand English (Figure-1). 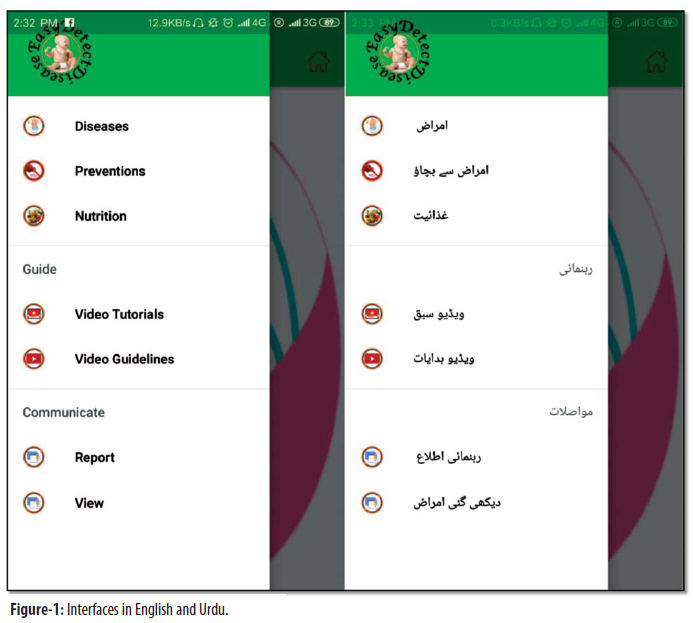 It also provided text-to-speech (TTS) facility for mothers who could understand Urdu, but could not read it. For usability evaluation, the recommended number of participants is 10.15 With the help of Lady Health Worker (LHW) patients' records, mothers with sick children were called to attend the mHealth sessions. They either already had their own smartphones or were provided with android phones. None of the mothers had used the app before. The mothers were divided into 4 age groups and four groups based on their level of education. The app was installed on the smartphones of the mothers and a facilitator delivered an introductory lecture to explain the features and the usability of the app. First of all, the bilingual interface was shown to the mothers to select a language of choice, then the disease diagnostic test was run to show all possible symptoms of various diseases. Each component of the app was demonstrated to show its functionality. After the demonstration, all mothers were asked to navigate through the app on their own, while the facilitator recorded the interaction of each mother with the app interface. Subsequently, a questionnaire was given to all the mothers. The facilitator assisted each subjects to fill it up. They recorded their suggestions and remarks regarding the app. The questionnaire had simple qualitative questions, like the name of mother and the child; the name of disease diagnosed in the child; navigation quality of the app; quality of detailed information on common childhood diseases in the app;; the efficacy of the preventive and nutrition components of the app; the utility of video tutorials and guidelines; the best feature of the app; the features that needed improvement; and any other remark about the app. Each mother was then requested to listen to a brief about app and its diagnostic questionnaire from the facilitator and they were asked to diagnose the disease of their children. After diagnosing the disease, the mothers were instructed to explore disease descriptions and to follow the given guidelines. They read about the dangerous signs, precautions, nutritional instructions and medical directions about the disease and followed the instructions provided in video guidelines. In the next session, each mother was asked what kind of health recoveries they had observed in their children after using the app. At the end of the two health sessions, it was decided to put the app on the Google Play Store which was done on February 24, 2019 and its downloading is free for all users. 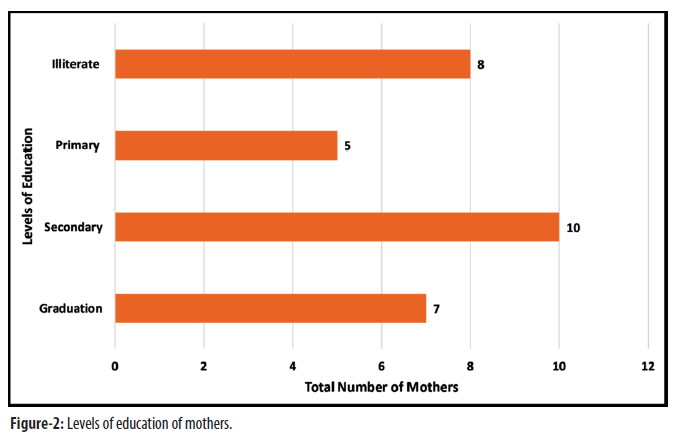 Mothers with graduation and secondary level of education used the app without any need of technical support or demonstration. Mothers with primary level of education navigated through the app pretty well compared to the illiterate mothers who were taught how to use the app and in second session, they were asked to diagnose the disease in their children on their own, which they did without any assistance. All the 30(100%) mothers used the app and were able to correctly diagnose the various diseases of their children that included diarrhoea, chicken pox, pertussis, typhoid, mumps and febrile fits (Table). 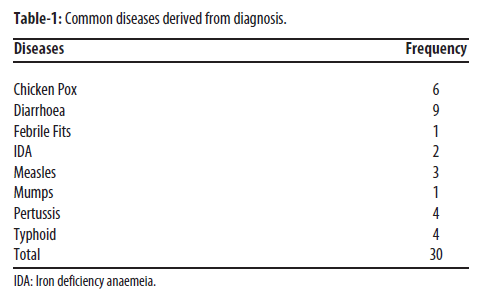 "I liked its simplicity and easy usage and the use of app does not require any navigational training as it is really easy to navigate". "The app does not require any skill to start as I just launched the app and it itself guided me what to do by the hints of hand symbol". "It does not take much time to diagnose the disease as it quickly shows the diagnostic results after getting symptoms from the mothers". "In my opinion, this app should be available as a built-in app in all smartphones. I will use it if it is publicly available."

After the app was put on the Google Play Store, within 5 days, it received 75+ downloads, 50+ reviews and current average rating was 4.96 stars out of the maximum 5. Most users appreciated the diseases knowledge inserted in the application and rated it with 5 stars. One user commented:

"I am pharmacist. It is very useful app. I suggest that each mother must have this app in her mobile. The information related to any disease and their treatment in it is according to modern treatment guidelines provided by different agencies that are established in US and other developed countries. So, information provided by this app is not only correct but also updated. That is why I give this app five stars."

Few of the other comments are given below:

"Very useful app. provides a necessary info to take care and use precautions" commented another user.; "Best fit for kids' diseases awareness."; "Perfect for Learning and Easy to use."; "Wow, amazing knowledge for mothers."; "Good for childhood diseases knowledge."; "It is very informative app."; "Useful for mothers."

The proposed app was found to be a useful learning tool for the treatment of childhood infectious diseases at home. Its salient features included easy symptoms detection, disease description, easy precautions, healthy nutritional instructions and video guidelines by the paediatricians. Mothers with varying level of education and with very less exposure to technological advances can easily use this app as it supports Urdu language, an audio feature and hand-hint overlays for illiterate mothers. The goal of teaching all mothers about childhood diseases was executed successfully and they all were able to diagnose diseases. They were interested in disease learning and showed interest in using it when made available online and on governmental public health directories across Pakistan. They admired its easy navigation, simplicity, worth, its free-of-cost availability and efficacy. Moreover, mothers' awareness makes a vital contribution towards mortality minimisation in children aged <5 years. The app provided a platform to educate mothers about the health of their children and to raise awareness of childhood diseases among the mothers. The initial version of the app supported most of the common childhood diseases. In the future, more diseases, nutritional guidelines and more preventive steps would be added. This version is bilingual, but the app would also be available in local languages of Pakistan in the future.

All subjects showed acceptance for the app and affirmed its easy usability, especially by mothers who had no formal education.

Disclaimer: The app does not provide any medicine prescription, dose usage or alternation to medical processes.

16. Nielsen J, Landauer TK. A mathematical model of the finding of usability problems. In: Proceedings of the INTERACT'93 and CHI'93 conference on Human factors in computing systems 1993, pp. 206-213.