Is Cinnamon Efficacious for Glycaemic Control in Type-2 Diabetes Mellitus?

Diabetes is on the rise, and has become a major public health issue. In view of limitations of available glucose lowering therapy, there is a need to explore and develop natural remedies with anti-diabetic properties. Spices such as cinnamon, cloves, bay leaves, and turmeric display insulin-enhancing activity in vitro. Cinnamon or Dalchini is popularly use as a spice for its fragrance and flavour in wide variety of traditional foods. Among various types of cinnamon, C. zeylanicum is well known as effective substitute for diabetes. Cinnamaldehyde is one of the major constituents (65-80%) of bark oil extracted from C. Zeylonicum which seems to reduce plasma blood glucose concentration more effectively when it is compared with metformin. It enhances the expression of proteins involved in glucose transport, insulin signalling, and regulates dyslipidaemia. This review describes the basic and clinical pharmacology of cinnamon.

In 2019, 463 million number of people were estimated to be alive with diabetes which represents 9.3% of the global adult population (20–79 years). This number is expected to increase to 578 million (10.2%) by 2030 and 700 million (10.9%) by the year 2045. In 2045, the top three countries with the highest number of people with diabetes are expected to be China, India and Pakistan, with 147, 134 and 37 million, respectively.1,2 The risk of type 2 diabetes is determined by an interplay of genetic and metabolic factors. Ethnicity, family history of diabetes, and previous gestational diabetes combine with older age, overweight and obesity, unhealthy diet, physical inactivity and smoking to increase risk. If it is not well controlled, may cause blindness, kidney failure, lower limb amputation and several other long-term consequences that impact significantly on quality of life. There are no global estimates of diabetes-related end-stage renal disease, cardiovascular events, lower-extremity amputations or pregnancy complications, though these conditions affect many people living with diabetes.3-5

Ceylon Cinnamon (C. Verum or C. Zeylanicum), bushy evergreen tree of the family Lauraceous is native to Sri Lanka, the neighbouring Malabar Coast of India and Myanmar and is also cultivated in South America and the West Indies. Because of this, it is also called Mexican cinnamon. The spice, consisting of the dried inner bark, is brown in colour and has a delicately fragrant aroma and a warm sweet flavour. In Urdu, it is called Dalchini. Various related species are also cultivated as a source of cinnamon spice, including Chinese Cinnamon (C. aromaticum or Cassia), Vietnamese or Saigon cinnamon (C. loureiroi), Indonesian cinnamon (C. burmannii), Camphor laurel (C. camphora) and Malabar cinnamon (C. citriodorum or C. tamala, also known as tejpata, tejpat or Indian bay leaf ).6,7 Italians called it canella, meaning "little tube," which aptly describes cinnamon quills. Among two prime types: Ceylon and Cassia, Ceylon cinnamon is also named as True cinnamon, is easy to discriminate from others by its look of quill. It composed of soft and light colour roll of layers whereas the others are dark, hard and hollow and rolled in one layer. Its low coumarin levels and delicate taste make it a preferred species.6,8 It is documented that cinnamon Cassia may be hepatotoxic because it contains high level of coumarin (0.8 to 10.63%); whereas cinnamon Ceylon has low level of coumarin content (about 0.2%), which makes its safer to use.9 However, there is paucity of sufficient scientific evidence about it.

The different parts of the plant possess the same array of hydrocarbons in varying proportions, with primary constituents [Table-1]. 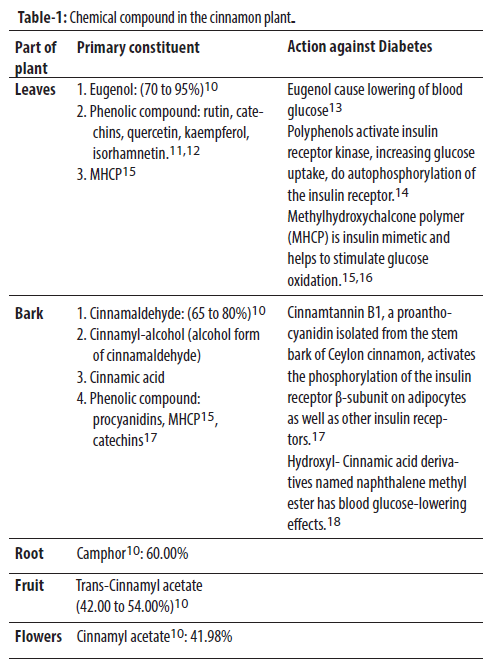 • A computational docking study has used Auto dock software to show high binding affinity and proteinligand stability of cinnamaldehyde and cinnamic acid towards target protein tyrosine phosphatase which promote use of these as a conventional therapeutic molecule.24 Negative regulation of protein tyrosine phospahtase-1B helps to improve in insulin action and also helps to control the storage of triglycerides in adipose tissues.25

• GLUT 4 is the major glucose transporter in skeletal muscle and adipose tissue which has a key role in uptake of glucose from blood stream, store it as glycogen and oxidizes it to produce energy. GLUT 4 is under control of insulin. It is well established that insulin promotes translocation of GLUT 4 from intracellular compartment to cell membrane.21 In diabetes mellitus because of the absence or insufficient sensitivity of insulin, GLUT 4 is decreased, so blood glucose can’t be stored and would be increased in blood stream. Cinnamon extract polyphenol improves type 2 diabetes by prompting GLUT 4 translocation.26

The clinical trials conducted on efficacy of cinnamon in glycaemic control, and lipid profile have shown significantly positive results as illustrated in Table-2.

US Food and Drug Administration listed cinnamon as substances generally recognized as safe (GRAS) to consume.48 Furthermore, according to the US Department of Health, cinnamon appears to be safe for most of the people when taken by mouth up to 6 grams daily for six weeks.49 The European Food Safety Authority sets the “daily tolerable intake” at about a teaspoon per day or 0.1 mg/kg body weight.50

Cinnamon use can be encouraged as metabolic modulator in persons with diabetes. Though it can be considered a complementary therapy, it should not be viewed as an alternative to established glucose lowering drugs. While the exact dose is not clear, one may recommend use of up to one teaspoonful of cinnamon powder as an adjunct to therapy.

There is currently growing interest in herbal remedies due to the side effects associated with oral hypoglycaemic agents and insulin used for the treatment of diabetes mellitus. Many herbs possess hypoglycaemic properties and are used as traditional folk medicine. One such product is cinnamon, which is generally recognized as safe (GRAS) by United States Food and Drug Administration. This review highlights the glucose lowering effect of cinnamon.

41. Crawford P. Effectiveness of cinnamon for lowering haemoglobin A1C in patients with type 2 diabetes: a randomized, controlled trial. J Am Board Fam Med. 2009;22:507-512.

49. National Center for Complementary and Integrative Health National Institutes of Health. U.S. Department of Health and Human Services. Herbs at a glance. Available at: https://nccih.nih.gov/health/cinnamon. Cited on 24. February, 2020.