Objective:To determine the diagnostic accuracy of contrast-enhanced computed tomography in the detection of necrosis in acute pancreatitis by taking surgical findings as the gold standard.

Method: The descriptive cross-sectional study was conducted at Radiology and Surgery departments of the Jinnah Postgraduate Medical Centre, Karachi, from January 1 to June 30, 2016, and comprised patients of either gender having severe clinical pancreatitis with symptoms lasting >72 hours without showing improvement. Computed tomography scan was performed with slice thickness of 3mm. Multiple detector scan of abdomen with contrast was done. Data was analysed using SPSS 19.

Conclusion: The diagnostic accuracy of contrast-enhanced computed tomography was found to be high in detecting necrosis in acute pancreatitis cases.

Acute pancreatitis (AP) is a sudden inflammation of the pancreas that can involve adjacent or farther-apart tissues and organs. It is caused by triggering of its own enzymes that causes digestion of the gland. AP is a common presentation in the emergency department (ED), generally of mild and severe forms. Admission judgments by ED clinicians are done according to the severity of pancreatitis.1 Rapid clinical assessment by the attending physician are of value for reliable and validated means of predicting patient outcome. Clinical and laboratory assessments and findings of contrast-enhanced computed tomography (CECT) imaging are used for establishing initial staging.2 Local anatomic abnormality is best defined by CECT which is superior to the Acute Physiology And Chronic Health Evaluation-II (APACHE II) score as predictor of local complications.3 This multiplanar imaging, including coronal and sagittal with three-dimensional (3D) voluming, makes it specific for determining the true confines of the disease.4 The CT severity index (CTSI) has now become a standard for description.5 On a 10-point scale, points are rewarded on the basis of presence or absence of fluid collections, presence of pancreatic necrosis and its grading and thus classified as mild (0-2 points), moderate (4-6 points) and severe (7-10 points).6 Studies evaluating CECT and operative correlation in the detection of peri-pancreatic necrosis and fluid collections are scant. Peri-pancreatic necrosis may not be seen on CECT and a normal enhancement of pancreas cannot rule out the presence of peri-pancreatic necrosis.7 The current study was planned to evaluate CECT and operative findings of necrosis in AP to assess the accuracy of CECT in detecting necrosis and in characterising the nature of peri-pancreatic collections.

The descriptive cross-sectional study was conducted at Radiology and Surgery departments of the Jinnah Postgraduate Medical Centre, Karachi, from January 1 to June 30, 2016, and comprised patients of either gender having severe clinical pancreatitis. After approval from the institutional ethics committee, the sample size was calculated while expecting sensitivity 73%, specificity 81%,8 prevalence of pancreatitis 40%3, with desired precision of 10% and confidence level as 95%. The sample was raised using consecutive non-probability sampling technique from among patients having pain in the epigastrium radiating to the back and having jaundice with bilirubin level >2.5mg/dl or >50 umo/l, indicating severe clinical pancreatitis. Also, those included had white blood cell (WBC) count 16000 cells/mm3, blood glucose level >10mmol/L (200mg/dl), lactate dehydrogenase (LDH) >600 iu/L, aspartate aminotransferase (AST) >200 iu/L, and their symptoms had persisted for >72 hours despite empirical therapy. Those known to have some contraindication to radiation or iodinated contrast media, pregnant women and patients already having had surgical interventions were excluded. After taking informed consent from the subjects, CT scan was performed (Toshiba Aquilion 120KV and 150mAs) with slice thickness of 3 mm from xiphi sternum to symphysis pubis with the patient in supine position. Multiple detector CT (MDCT) scan of abdomen with contrast of the patients was reviewed by 2 senior radiologists having 5-year postfellowship experience. Findings of MDCT were described in terms of appearance with staging and were correlated with operative findings. Data was collected along with clinical history on a proforma. Data was analysed using SPSS 19. Quantitative variables, like age and duration of disease, were expressed as mean and standard deviation (SD). Qualitative variables, like gender, CECT findings of AP and operative finding of AP, were expressed as frequencies and percentages. Diagnostic accuracy of CECT was calculated by taking operative findings as the gold standard. 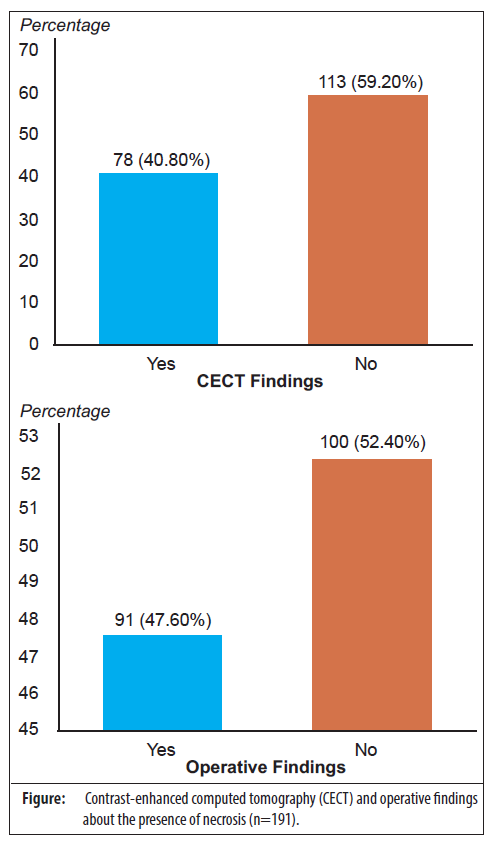 The diagnostic accuracy of CECT was also compared in terms of age, gender and duration of symptoms (Table-2).

Age and gender are known to affect the hazards and causes of pancreatitis as pancreatic disorders affect blacks more than any other race.8 AP is one of the most familiar gastrointestinal causes for hospital admission in the United States. The annual incidence of AP in the United Kingdom ranges 30-50 cases per 100,000 population.9 In a large-scale epidemiological study in North Adriatic Region in Croatia, the AP incidence per year was around 30 per 100,000 population over a 10-year period. Alcoholism and biliary tract disease constitute about 90% of all AP cases.8 In a local study of 96 patients, 44(45%) had gall stones with findings of AP. Mean age was 44.6±17.47 years and gender distribution was 60.4% females and 39.6% males, depicting high prevalence of gall stones pancreatitis in women aged >40 years.10 Somewhat similar results were found in our study as well with the mean age of the patients being 39.65±11.67 years, and there were 97 (50.80%) females and 94(49.20%) males. The early recognition of pancreatic necrosis is the most important feature in the AP treatment. Interstitial pancreatitis has a mortality rate of <1% which increases to >20% in patients displaying pancreatic gland necrosis.11 Previously, ultrasonogram was regarded as the most necessary investigation for pancreatitis, despite the fact that pancreas was envisioned only in 60-70% patients. Today, CT is contemplated as the gold standard test in AP detection, identifying its complication and response to therapy. Recent studies have shown that even in patients with serum amylase and lipase levels in the standard range, CT features were suggestive of AP.2 According to literature, a qualified physician can diagnose AP in only 34% cases by clinical examination and with serum lipase and amylase levels, only 40% cases. Although, Lipase remains a principle serological test for the detection of pancreatitis, but if the levels are three or more times higher than the upper limits of normal, they do not inadvertently confirm the diagnosis, and many other possible differential diagnoses can exist.12 Therefore, CT is a tool when the diagnosis is in doubt. The reliability of CECT in identifying pancreatic necrosis is almost 90%13 and its specificity increases with growing percentage of pancreatic necrosis.11 Specificity of CT is about 50%, if there are only small areas of necrosis; but in more than 30% necrosis, the specificity of CT is 100%. These results were also reflected in our study and in earlier studies.14,15 Abdominal imaging is helpful in establishing AP diagnosis in emergency conditions. CECT is of high diagnostic value, but it is unjustified to use this investigation on a regular basis, as the diagnosis is evident in many patients and most have a mild, unchallenging course. However, those patients whose condition is deteriorating and there is no improvement after 48–72 hours, like having persistent pain, fever, nausea, unfit to begin oral feeding, CECT or magnetic resonance imaging (MRI) scan is advised to determine local complications, like pancreatic necrosis.16-18 In our study, CECT sensitivity was 71.4%, specificity 87%, PPV 83.33%, NPV 76.99% and overall diagnostic accuracy 79.5%. In one study, CT scan had sensitivity of 73% and specificity 81% to predict AP severity. Multiplaner imaging, including coronal and sagittal, combined with 3D voluming, make it ideal to recognise the extent and degree of the disease.19 The CTSI has now become a standard for description,20 and classifies pancreatitis as mild, moderate and severe. Thus, imaging has a great job in the management of AP patients. Pancreas, which was considered a hidden organ, has now been revolutionised by CT pancreatic imaging, precisely and non-invasively.21 The correlation between CT findings and surgical confirmation of necrosis has been investigated.22,23 CT has shown an overall accuracy of 87% with a sensitivity of 100% for the detection of extended pancreatic necrosis and a sensitivity of 50%, if only minor necrotic areas were present at surgery. There were no falsepositive (FP) CT scans, which yields a specificity of 100%.22,23 These results were subsequently confirmed by previous studies as well,24,25 and the importance of CT for detection of pancreatic necrosis was emphasised.

The diagnostic accuracy of CECT was found to be highly accurate in the detection of necrosis in AP patients.

16 McMahoon MJ, Playforth MJ, Pickforth IR. A comparative study of methods for the prediction of severity of attack of acute pancreatitis. BJS 1980; 67: 22-5.

Influential factors of out of pocket payments for health care in Iran: A foresight approach using the cross impact analysis

The effect of the sound of the ney (reed flute) on women in labour in Bursa, Turkey